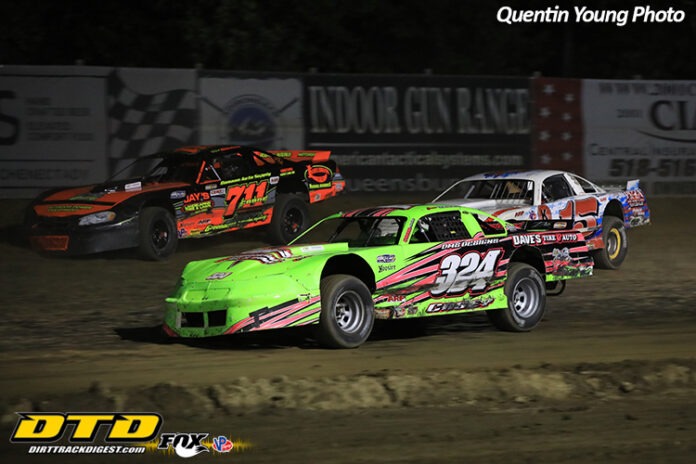 Through the generosity of many of its marketing partners, Albany-Saratoga Speedway will be staging nine pro stock features that will pay $1,000 to win during the regular season in 2021.

The first time the pro stock drivers will be racing for a $1,000 payday will be in the “Hell or High Water” opening-night card on Friday, April 16. That feature will be sponsored by Crane’s Outdoor Power Equipment, which will have its name attached to three of the high-paying features this season. Crane’s will also be the pro stock feature sponsor on Friday, June 11 and Friday, Aug. 20.

RCT Roofing will be kicking in the extra incentive on Friday, May 14, while Ghent Wood Products will be the pro stock feature sponsor on Friday, May 28.

Ron Mensing’s Native Pride program will sponsor the “Wasichus” for pro stocks on July 2. That night will also feature a spectacular fireworks display.

In addition to the nine $1,000-to-win races, there will also be three separate pro stock dashes during the season, on April 30, June 11 and July 9. Those three dashes will pay $250 to win. Eastwood Detailing will be putting up the bonus money for two of those events, while Crane’s Outdoor Power Equipment will sponsor the other one.

“I can’t say enough about how our pro stock sponsors stepped up this season,” said Albany-Saratoga Speedway promoter Lyle DeVore. “The competition in that division has been intense ever since we took over the operation of the speedway in 2012, and this year isn’t going to be any different.”

The pro stock division is coming off one of its most competitive seasons ever, with “Cousin” Luke Horning winning the track championship by four points over Josh Coonradt. Both Horning and Nick Stone won four features in 2020 to lead the division.

Duell didn’t record a win in 2020, but can become the winningest driver ever in the pro stock division at Albany-Saratoga Speedway this season. Joe Santoro tops the all-time win list with 26, while Duell, Rob Yetman and the late Carl Vladyka are tied for second with 24.