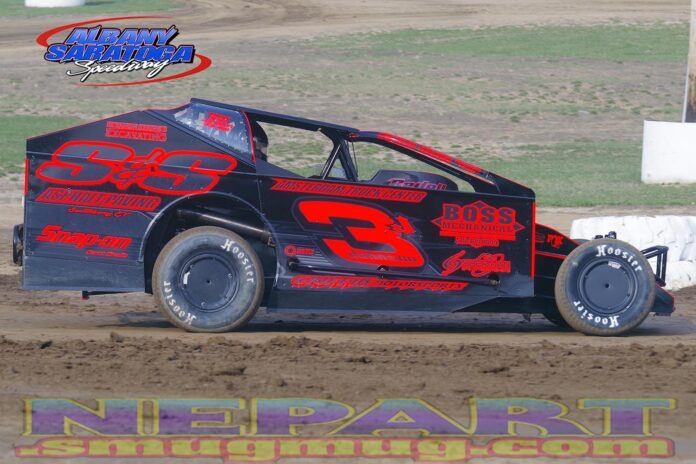 Getting first crack at the racing surface, Johnson cranked out a lap of 15.228 seconds in his big block-powered Bicknell. That initial session also saw blistering times turned in by Jack Lehner (15.498), Matt DeLorenzo (15.712) and Demitrios Drellos (15.758), who will be piloting Ed Munger’s No. 93 on a regular basis at Albany-Saratoga this season.

A lot of attention in the pits was directed to Nick Stone’s radically designed pro stock, which was easily the class of the field, turning in laps of 18.257 and 18.367. Chad Jeseo (18.457) was two-tenths behind Stone in the first session for pro stocks, while Chucky Dumblewski stopped the clock in 18.596 in the second session.

Andrew Buff (16.430) and Nick Scavia (16.610) turned in solid performances in the sportsman practice session. Defending track champion Tim Hartman Jr., still adjusting to the coils in his new DKM chassis, turned in a time of 16.744.

According to track officials, nearly 150 cars were inspected on Friday, including 28 modifieds and 44 sportsman.

With practice in the books, the track crew is preparing for the “Hell or High Water” opening night show on April 16. The highlight of the card will be the modified feature, which will pay $5,600 to win, thanks to support from Bart Contracting and Schaghticoke Wine & Spirits.

In addition, the modified Hard Charger will receive a $500 gift card from Dave Prime Jr. of MAC Tools.

Promoter Lyle DeVore has announced that all modified heat races this year will be 12 laps, as a tribute to Jack Johnson, who died on April 1. Jumpin’ Jack still sits second on Albany-Saratoga’s all-time modified win list with 90 victories, and was a three-time modified track champion (1979, 1981 and 1983).

All weekly divisions will be in action on April 16, with sportsman and the pro stocks racing for increased purses.

The sportsman winner will receive $1,500 through sponsorship from John Ray & Sons and West End Towing, and the pro stock winner will walk away with $1,000 through support by Crane’s Outdoor Power Equipment.

In case of rain, the “Hell or High Water” card will be held on Sunday, April 18.