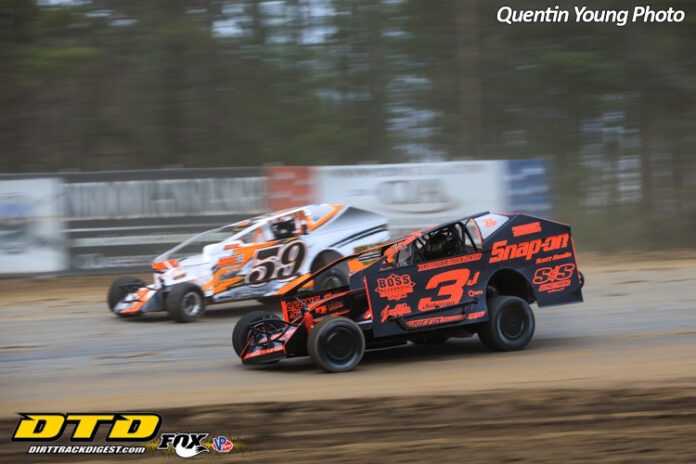 The two-time modified champion dominated a star-studded field to win the 56-lap “Hell or High Water” feature that kicked off the 2021 racing season at the historic Malta Track.

The victory was Johnson’s first opening-night win at Albany-Saratoga since 2014, giving the Guilderland, N.Y. driver a $5,600 payday.

With all divisions using heads-up starts on opening night, Johnson started on the outside pole, next to defending modified champion Mike Mahaney and it only took Johnson three laps to put his new Bicknell, sporting new sponsorship from S&S Asphalt Paving, into the lead.

And that’s where he stayed, although he admitted he never got comfortable. “I drove like they were on my bumper all night,” he said.

The first challenge came from Billy Decker. The veteran, who began his racing career in the old 320 modified division at Albany-Saratoga, started third and took the No. 2 spot away from Mahaney on lap 14. But even when Johnson started to weave through lapped traffic, all Decker could do was play follow the leader, as Johnson kept his Bicknell stuck to the bottom and the top was going away quickly.

Soon, all eyes were on Mat Williamson, who had started 13th. Williamson was one of the few drivers who could make the top work, and he got a big run off the fourth turn on lap 38 to take third place away from Mahaney.

By that time, Johnson had a half-a-straightaway lead over Decker. The sixth and last caution flag of the night flew on lap 43, bunching the field, but by the time Williamson got past Decker for second to complete lap 48, Johnson was again in control, and beat Williamson to the checkered flags by 1.606 seconds.

“This is awesome,” said Johnson in victory lane. “It sets the tone for the rest of the year, and it takes a lot of pressure off.”

Stewart Friesen, who had six wins at Alban-Saratoga last season, was never a factor for the top prize. Friesen made contact with Derrick McGrew Jr. on the first lap of the third heat, lost a couple of spots and only finished seventh. That put him in the first modified consy, which he won, but it also put him 21st on the starting grid for the 56-lap feature.

Once the track slicked up, Friesen was in the same boat as the rest of the field, looking for the fastest way around the track. He passed Tim Fuller on the final lap to finish seventh, which gave him the Hard Charger award, a $500 gift card for tools from Dave Prime Jr. and Mac Tools.

Joe Williams started in the front row and notched his first Albany-Saratoga win on dirt in the 25-lap sportsman feature, which paid $1,500 to win through sponsorship from John Ray & Sons and West End Towing. Williams’ last victory at Albany-Saratoga Speedway came on July 1, 2011, when the Malta track had an asphalt surface and was sanctioned by NASCAR.

Justin Severance, who started on the pole, finished second, and was followed by Darryl Nutting, Jamy Begor and Dick Bisson.

Chad Jeseo won a dogfight with Josh Conradt to take the checkered flag in the 25-lap pro stock feature and earn $1,000, with the extra money kicked in by Crane Outdoor Power Equipment.

Coonradt started on the pole and set the early pace but Jeseo, who had started fifth, was haunting the leader after only seven laps.
Through cautions and restarts, Jeseo ran the low groove, while Coonradt remained up high. But Jeseo finally got the lead coming out of the fourth turn to complete lap 18.

On a restart on lap 20, Coonradt made contact with Jason Casey, which put Stone into second, and he was less than a second behind Jeseo at the finish. Casey finished third, with Chucky Dumblewski fourth and Jay Casey fifth.

Dylan Madsen inherited the lead in the 20-lap limited sportsman feature when polesitter Gerard LeClair got tangled up with two slower cars early in the race, and Madsen went on to record his second career win at Albany-Saratoga. Madsen, Chris Crane Jr. and Bryce Breault sat in the first three spots on lap seven, and that’s where they stayed.

Jeff Meltz Sr., who was the 2020 street stock track champion, picked right up where he left off with his first win of the year in the 15-lap feature in that division. Josh Bussino was second, with Jeff Meltz Jr. third.

Jaxson Ryan dominated the four-cylinder feature, leading from flag-to flag. Damian Ward was a distant second, with Slappy White third. Robert Garney was the first single-cam car across the finish line, and was fifth overall.