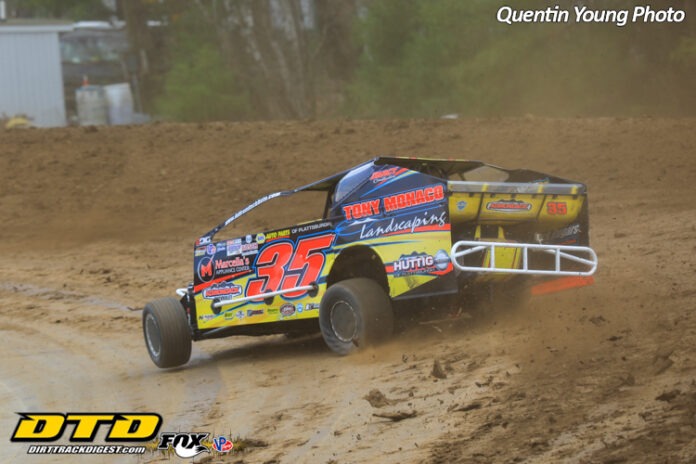 MALTA, NY – On a night that was better suited for playing pond hockey, Mike Mahaney and Billy Decker cranked the entertainment meter up to high, with Mahaney holding off “The Franklin Flyer” to record his first modified win of the season in the 35-lap feature at Albany-Saratoga Speedway Friday night.

Mahaney, the 2020 track champion at Malta, came from his 12th starting position in the bulky 33-car field, and used a restart on lap 27 to take the lead away Peter Britten, who had set the pace since lap six. One lap later, Decker, who had started 20th, took over the No. 2 spot, setting up the wild finish.

Decker was running the high line, while Mahaney was staying low, and was getting huge runs off the second turn, leaving Decker in his wake.

But Decker got a big break on lap 32, when the final caution flew when Matt Depew bounced off Demetrios Drellos coming down the front straightaway, collecting Scott Huber and Jack Speshock.

Decker, now on the outside of Mahaney, got a good jump on the restart and the two were side-by–side going down the backstretch. But Decker couldn’t complete the pass, and as they came out of the fourth turn, Mahaney drifted up to block Decker’s path and hit the finish line just 0.406 seconds ahead of Decker.

“We’ve had a lot of good runs this year, thirds, fourths, fifths … but this is great, to get our first win of the season,” said Mahaney, who only won one feature on his way to the Albany-Saratoga title last year. “I have to give a lot of credit to Billy. He came on strong at the end. I was hanging on for dear life.”

Anthony Perrego, who started 13th, charged up to finish third, while Britten, who led 21 laps before giving up the top spot to Mahaney, was fourth. Ronnie Johnson crossed the finish line fifth, his first top-five finish of the season.

Rob Yetman took sole possession of second place on the track’s all-time pro stock win list with his first win of the season in the 25-lap feature in that division. Yetman, who started ninth, used a restart on lap four to charge into the lead and that’s where he stayed to pick up the 25th win of his career, moving him one step closer to all-time leader “Hollywood” Joe Santoro, who recorded 26 pro stock wins before moving up to sportsman.

Yetman opened up a big lead, leaving Nick Stone and Kim Duell to battle for second. Despite a late caution, Stone hung on for the No. 2 spot, with Duell third. They were followed by Jason Corbin and defending champion Luke Horning.

Stone also picked up a $250 bonus for winning the Eastwood Detailing Dash for Cash,

In recording his first career win at Albany-Saratoga, Stone followed in the footsteps of his father Todd and grandfather Gardner. Todd won his only modified feature at Albany-Saratoga in 1999, and Gardner was a four-time winner in the pro stock division.

Chris Murray took advantage of a restart with two laps to go to win the 15-lap Lake Auto Parts street stock feature. Jimmy Duncan set the pace for the first 13 laps, but Murray, making his first appearance of the season, pulled even with Duncan in the second turn on the final restart, and then got the lead for good coming out of the fourth turn.

Paul Braymer got up for second, with Duncan hanging on for third.

Jaxson Ryan improved his record to 3-for-3 by winning the 15-lap four-cylinder feature. He started third, went right to the front and led all 15 laps, leading David Frame and Damian Ward across the finish line. Tim Meltz was fourth overall and had the first single-cam car across the line, while Robert Garney, looking for his third straight single-cam win, finished fifth overall.