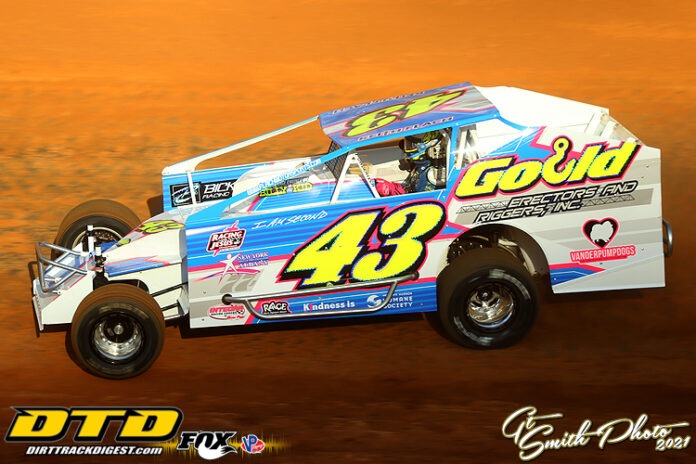 MALTA, NY – Keith Flach must have felt like the weight of the world was lifted off his shoulders Friday night.

Taking advantage of a good starting position, “The Ravena Rocket” held off a strong challenge from Anthony Perrego to win the 35-lap modified feature at Albany-Saratoga Speedway on “Hoosier Mama Night.” his first victory at the historic Malta track since May 18, 2018.

Flach started sixth in the 30-car field, but couldn’t really get into any rhythm because of three early mishaps, including a red flag on a restart on lap nine when modified rookie Jack Speshock rolled his car in the first turn and wound up on his roof.

Two laps later, Flach powered off the fourth turn to take the lead away from polesitter Elmo Reckner, and Flach was now in total control.

All the action was behind him, where Perrego, who started 14th, and Larry Wight, who started 16th, were charging to the front. Perrego squeezed inside Reckner in the fourth turn for second place on lap 15, and the next time around, Wight made a sweeping move around both Jack Lehner and Reckner to take over third.

Flach was very comfortable riding the top, but Perrego got the break he needed on lap 21, when LJ Lombardo dropped off the pace to bring out the final yellow.

But Flach just remained on top, and Perrego and Wight could only watch as he pulled away for his fifth career win at Albany-Saratoga.

“I was nervous on that last restart,” Flach admitted. “Anthony and some of those other guys are always on top of their game.”

Perrego’s runner-up finish was his third top-five run in four starts this year, while Wight was third in his 2021 Malta debut. Lehner and Demetrios Drellos completed the top five.

Jim Nagle reached a milestone in his career with his first career victory in the 25-lap sportsman feature. Nagle started ninth and avoided some early chaos to get to the front, where he outran Cody Ochs for the win in his new Mickle Automotive-sponsored Bicknell. Andrew Buff was third, followed by Connor Cleveland and Dan Grignon.

“I was lucky the holes opened up for me and I was able to capitalize on the opportunities to get the win,” Nagle said in victory lane.

Chad Jeseo picked up his second win of the season in the 25-lap pro stock feature. This was also a wild one, as it appeared for a long time that defending champion Luke Horning was going to get his first win of the season.

Despite starting 13th, Horning only needed five laps to get the lead and then started running the high groove. But as the feature, the final one on a long night of racing, wore on, the top started to go away and Jeseo kept closing in on Horning. When Horning drifted too high in turn four on lap 13, Jeseo ducked underneath to get the lead for good.

Chucky Dumblewski, who was also hooked up on the bottom, got up for second, followed by Jason Casey, Kim Duell and Jordan Modiano.

The street stocks ran a 22-lap feature as the first leg of the FantaSStic 4 street stock series with Glen Ridge Motorsports Park. When this one was over, Josh Bussino was in victory lane for his first win of the year in a battered and bruised race car. Bussino started 19th in the feature after tearing the front end off his car during his qualifying race.

Jimmy Duncan started on the pole and had a great battle going with Paul Braymer when the two locked together going down the backstretch and spun in the third turn on lap 17. That put John Filarecki on the point, but Bussino got the jump on the restart and stayed out front, leading Filarecki and Jason Samrov across the finish line.

David Frame ended Jaxson Ryan’s three-race winning streak in the 15-lap four-cylinder feature. Ryan had the lead when a caution came out with one lap to go, and on the restart, Frame and Ryan made contact in the front straightaway, with Ryan tagging the wall and Frame getting his first win of the year. Damian Ward finished second while Ray Young was third and had the first single-cam car across the finish line. Young ended Robert Garney’s three-race win streak in the single-cam division. The four-cylinder results are unofficial until further review.