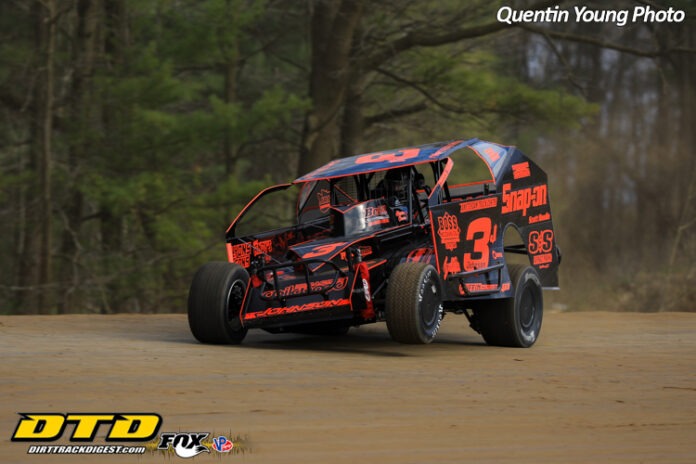 MALTA, NY – Marc Johnson didn’t think he had a car that could win Friday night’s modified feature at Albany-Saratoga Speedway.

Boy, was he wrong.

After throwing some major changes into his chassis setup prior to the 35-lap feature that highlighted Law Enforcement Night, Johnson went out and absolutely dominated to record his second win of the season.

Despite starting 15th in the 32-car modified field, Johnson only needed 12 laps to get to the front and then ran away from the field, finishing four seconds ahead of runner-up Demetrios Drellos.

“We changed a lot of stuff because I didn’t think I was fast enough to win,” said Johnson in victory lane. “Honestly, I didn’t even feel that good during the feature.”

The 35-lap feature was the scene of a lot of carnage. It began on the first lap, when Drellos got into the side of Keith Flach, who looking for his second straight win, and bumped Flach into the berm. That caused Flach’s car to leap into the air and roll over, coming to a rest on its roof.

Another mishap on lap 18 eliminated both defending champion Mike Mahaney and Anthony Perrego, who has had one of the fastest cars at the track since opening night. Coming down the front straightaway, Todd Stone and Elmo Reckner made contact, with Stone spinning in the first turn. Perrego tried to avoid the spinning car, but hit Stone’s car with his right rear, while Mahaney had nowhere to go and plowed into Stone’s car.

With Johnson enjoying a comfortable lead, all the attention turned to the battle for second. James Meehan, who had started fifth, was driving the race of his life and moved past Reckner, who led the first 11 laps, for second on lap 16.

Drellos, who only lost a couple of spots after his incident with Flach on the first lap, worked his way back to the front and took over third on lap 21. With 10 to go, he had caught Meehan and then used a restart on lap 28, when Peter Britten suffered a flat right front tire, to take over second.

But by that time, Johnson was long gone.

“I really didn’t know what was going on behind me,” said Johnson. “With about four to go, everyone started taking pictures of me and I figured someone was pulling up on me, so I just tried to hit my marks.”

Meehan finished third, the best finish of his modified career, while Reckner and CG Morey completed the top five.

Tim Hartman Jr. won the 25-lap sportsman feature, his first win of the season. The victory was also the 29th of his career at Albany-Saratoga, moving him just three wins away from breaking Mike Ballestero’s record of 32 career victories.

Justin Buff came out of his fifth starting position to take the lead on lap three, but thanks to a couple of early yellow flags, Hartman Jr. who had started 15th, was running in the top six after just six laps.

Hartman Jr. moved past both Garret Poland and Bryant Moore on lap seven to move into second, and then slowly closed in on Buff. Buff got into traffic on lap 16 and four laps later, when his lane was blocked by the lapped car of Justin Barber, Hartman Jr. swung to the outside in turn four and took the lead for good.

Following Hartman Jr. and Buff across the finish line were Marty Kelly III (who was celebrating his birthday), Jim Nagle and Ballestero. Hartman earned $1,000 for his win thanks to support from DCS Contracting.

Josh Coonradt and Rich Crane put on a crowd-pleasing show in the 25-lap pro stock feature. The duo ran side by side for the final quarter of the race, with Coonradt building up momentum up high and Crane hugging the inside. Coonradt came away with his first win of the year, beating Crane by .357 of a second. Jason Corbin got up for third.

Coonradt also got $1,000 for his win, through sponsorship by RCT Roofing, while Crane picked up an extra $200 for winning the Service Tire Truck Centers Dash for Cash.

After a rash of yellow flags, Zach Buff recorded his second win of the season in the 20-lap Haun Welding limited sportsman feature. Buff took the lead for good on lap seven and remained out front while Dylan Madsen and Craig Wholey battled for second. Madsen, who already has two wins under his belt, got the runner-up position, but was nearly a full second behind Buff at the finish. Completing the top five were Wholey, Bryce Breault and Chris Jakubiak.

Jimmy Duncan made quick work of the 15-lap Lake Auto Parts street stock feature. Duncan started third, but nearly ran on the infield going down the backstretch on the first lap to come out with the lead heading into the third turn. He led all 15 laps in his Kentucky Fried Chicken-sponsored ride, leading Mike Arnold and PJ Cram Jr. across the finish line.