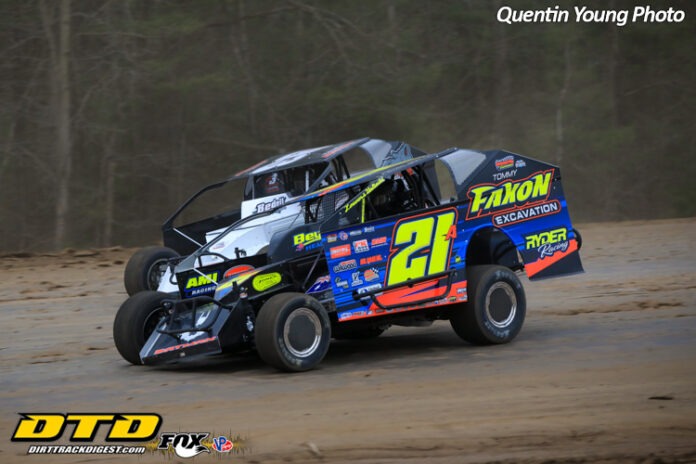 MALTA, NY – No, this wasn’t Gotham City. And there was no signal flashing across the night sky.

But make no mistake about it. Batman is back.

Britten, the 2017 modified champion at Albany-Saratoga, hadn’t been in victory lane at Malta since Aug. 9, 2019. But he was back Friday night, winning a spirited battle with veteran Vermont driver Todd Stone.

How long has it been since Britten was in victory lane at the historic Malta track? “It’s been toooo long,” he joked, adding, “I almost forgot the procedure.”

Britten, who had only one top five finish in his first five starts at Albany-Saratoga this season, came out of the 13th starting position in the 29-car field and was on the move early, breaking into the top five after just 15 laps of the feature, which ran caution-free.

Stone, who had taken the lead away from Rich Ronca on lap five, maintained a healthy lead over Ronca and Keith Flach until he got into lapped traffic midway through the feature. Both Ronca and Flach closed right in on Stone, and when Flach moved to the high side, looking for more traction, it opened up the bottom for Britten, who moved into third with 10 to go.

Stone was stuck behind the lapped car of John Lutes Jr. for a number of laps, allowing Ronca and Britten to stay within striking distance, and when Stone finally cleared Lutes, Britten used the lapped car as a pick to move into second.

Britten closed right in on Stone’s rear bumper on lap 31, and the two leaders were dead even when they crossed the start/finish line on that lap. Britten then pulled ahead of Stone for good going down the backstretch and came away with his 12th career win at the historic Malta track.

“I was confident coming into tonight,” said Britten. “But you never really know with these deals. We just kept tweaking on the car and we finally got it right tonight.”

Stone, who won his only modified feature at Albany-Saratoga on opening night in 1999, when the track ran triple features, was disappointed but not discouraged by finishing second.

“This is the best we’ve been all year,” he said. “The guys changed the car all around and it really felt great.”

Following Britten and Stone across the finish line were Flach, Jeremy Pitts and Neil Stratton. Ronca, who faded to eighth, went home with an extra $200 for winning the Service Tire Truck Centers Dash for Cash.

Drew Cormie led flag-to-flag to record his first career victory at Albany-Saratoga in the 25-lap sportsman feature. After Cormie opened up a comfortable lead, the field was bunched on lap 23 when Justin Barber came to a stop on the backstretch, but no one had anything for Cormie, who finished with a 1.020-second advantage over Michael Wagner-Fitzgerald.

“This one is for my grandfather,” said Cormie in victory lane. “I’m sure he was looking down on me tonight.”

Completing the top five were Nick Lussier, Dan Grignon and Andrew Buff. Greg’s Towing put up $100 bonuses for the sportsman drivers who finished in positions 5, 10, 15, 20 and 25. Those bonuses went to Buff, Connor Cleveland, Ricky Quick, Bryant Moore and Darryl Nutting.

Josh Coonradt drove to his second consecutive win in the 25-lap pro stock feature. Coming out of the fourth starting position, Coonradt only needed three laps to take the lead away from Jason Meltz and was cruising along until a couple of late restarts jangled his nerves a little bit. But he never bobbled and held off Meltz to get the win. Completing the top five were Chad Jeseo, Jay Casey and Rob Yetman.

Like the modified feature, the 20-lap Haun Welding limited sportsman feature was also caution free, with Taylor Wason picking up his first win of the season. Brandon Jacobsen started on the pole and set the early pace, but Wason, who started fifth, started putting pressure on the leader on lap nine and when they got into heavy traffic, Wason grabbed the lead on lap 18 coming out of the second turn. Tyler Rapp put the same move on Jacobsen one lap later to finish second, with Jacobsen third, Chris Jakubiak fourth and Bryce Breault fifth.

Matt Mosher won the 15-lap Lake Auto Parts feature, getting to victory lane for the first time this season. Former track champion Al Relyea seemed to be in control of the race, but Mosher used a restart on lap 14 to end Relyea’s bid for the victory, and also picked up a $100 bonus from Casterella.