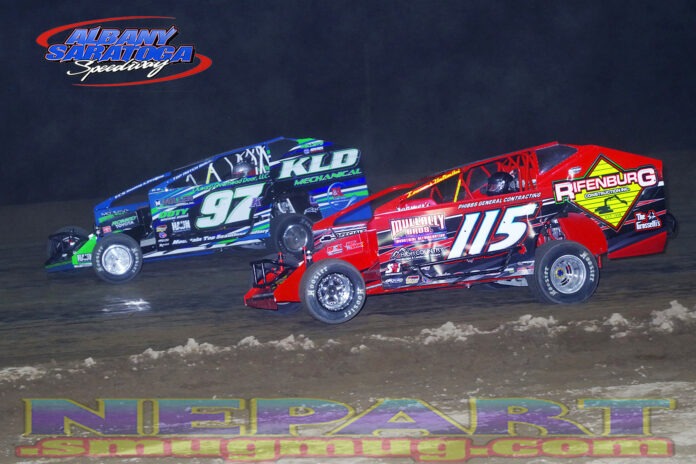 MALTA, NY – After failing to record a top-five finish in the first six races of the season at Albany-Saratoga Speedway, Ken Tremont Jr. was beginning to doubt himself.

But a lot of those doubts were erased Friday night when the 13-time track champion won the 35-lap feature at the historic Malta track, becoming the sixth different modified winner this season.

After starting 10th, Tremont needed 18 laps to finally get the lead, and then held off a late charge from Marc Johnson to record his 79th career victory at Albany-Saratoga Speedway.

“This gets a big monkey off my back,” he said in victory lane.

The 59-year-old Tremont had to battle to get to the front, despite starting 10th. Taking advantage of a restart on lap 8, Tremont rocketed into third, getting a good seat for a battle between 13-year-old Derrick McGrew Jr., who started on the pole, and Bobby Hackel IV for the lead.

Hackel IV was running the top, and went around McGrew for the lead on lap 10. The next time around, Tremont followed Hackel’s high line to to take over second.

Three laps later, Hackel IV nearly jumped the cushion in turn two and it looked like Tremont was going to get the lead, but a caution came out for McGrew, who backed his modified into the tire wall in the fourth turn, before the lap was completed, keeping Hackel IV in the lead.

But five laps later, Tremont pulled off a crossover move in the fourth turn, cutting from low to high to break Hackel’s momentum, and he had the lead for good.

He got into lapped traffic on lap 22, and that allowed Johnson, who had started 13th, to close the gap on the leader. But with so many lapped cars sticking to the inside, Johnson had to abandon his preferred low line, and never made a serious run at Tremont until the final lap, and by then it was too late.

“I really didn’t see anybody (challenging him), so I never really got that sense of urgency in the lapped cars,” said Tremont.

The constant experimentation with springs and shocks seemed to pay off Friday night, Tremont said. “This is the best I’ve felt all year.”

Ronnie Johnson, who started 11th, got up for third, followed by Jack Lehner and defending track champion Mike Mahaney.

The best race of the night was the 25-lap pro stock feature. Kim Duell and Jason Meltz started on the front row and ran side-by-side for most of the feature. On the final lap, Meltz tried to get a big run at Duell coming out of the fourth turn, and got sideways, allowing Duell to come away with his first win of the season in his home-built Twister chassis.

The win was the 25th of Duell’s career at Albany-Saratoga, moving him back into a tie for second place on the all-time pro stock win list with Rob Yetman, who won earlier this year. Both Duell and Yetman are now one win away from tying Joe Santoro, who tops the win list with 26 victories.

Duell earned $1,000 for his win because of a bonus added to the purse by DCS Contracting. Completing the top five were Jason Corbin, Chad Jeseo, Yetman and Josh Coonradt.

Hartman Jr. started 16th in the field, but was running in the top five after 10 laps.

Two restarts helped him get into a battle for the lead with Fred Proctor and Dylan Bokus for the top spot. Bokus, who had moved out front on lap four, lost the lead to Proctor on lap 15 and the next time around, the three leaders were three-wide coming down the front straightaway, with Hartman Jr. squeezing by Bokus on the inside to move into second.

The next time the caution came out, Hartman Jr. got a big run on the restart and took the lead for hood. Another yellow put Chris Johnson right next to Hartman Jr., but Johnson was no match for Hartman Jr. in the closing laps, and had to settle for second. He was followed by Connor Cleveland, David Boisclair and Jeff Washburn. Washburn picked up a $200 bonus for winning the Service Tire Truck Center Dash for Cash.

Bryce Breault picked a perfect time to record his first win of the year in the 20-lap Haun Welding limited sportsman feature, as the winner’s share of the purse was increased to $750 by Macson Industrial Services. A caution on lap 16 played right into Breault’s hands. He had been hounding Dave Fachini for the lead before the yellow came out, and then took advantage of the restart to move out front.

Dylan Madsen got up for second, and was followed by Chris Jakubiak, Taylor Wason and Fachini.

Jimmy Duncan recorded his second win of the year in the 15-lap Lake Auto Parts street feature. Duncan started 10th, but was up to second after six laps and then took over the point on lap 10. He easily stepped away from the field, leaving Josh Hemming and Jeff Meltz Jr. to battle for second, Hemming won that skirmish, with Maltz third, Jeff Meltz Sr. fourth and Al Relyea fifth.

Jaxson Ryan dominated the four-cylinder feature, easily recording his fourth win of the season. Damian Ward was a distant second, with David Frame third. Ron Lanfear, who was fifth across the finish line overall, chalked up his first single-cam win of the year.