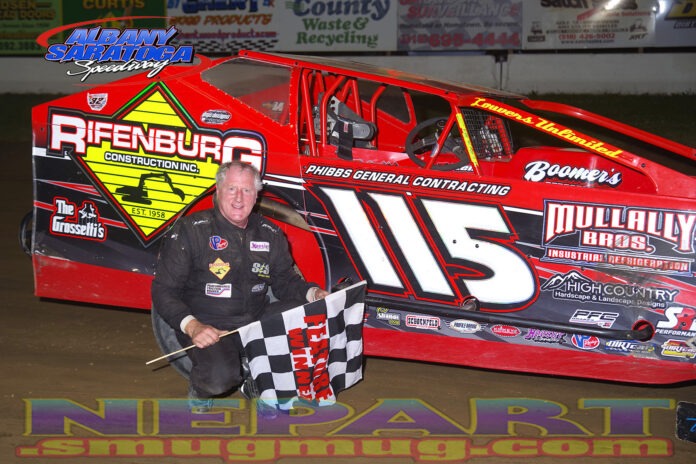 Tremont became the first driver to earn the $500 Back-To-Back Challenge bonus, put into effect prior to the 2020 season by Madsen Overhead Doors and Flach Performance Products.

Ironically, DeLorenzo was the last driver to win back-to-back features, accomplishing the feat during the 2018 season.

DeLorenzo, who had to sit out the previous week’s feature after blowing the rear end in his car during his heat race, was in good position to get his first win of the season, coming from his seventh starting position to squeeze past Scott Huber to take the point after just four laps.


But Tremont, who started 14th, Anthony Perrego and Keith Flach were all on the move early, and two members of that group brought out the second caution of the race on lap nine, when Flach jumped the cushion in the short chute between turns three and four. Perrego, who was inside Flach, made contact with Flach’s car, resulting in Flach spinning out.

Tremont used another restart on lap 12 to move past Huber into second and three laps later, another yellow flew when Jeremy Pitts suffered a flat tire.

That put Tremont next to DeLorenzo on the restart, and Tremont got a big run in the top groove and passed DeLorenzo coming out of the fourth turn to complete lap 17.

Although Tremont looked like he might pull away, he soon got into lapped traffic, which allowed DeLorenzo to keep the 115 in his sights. But DeLorenzo had another problem, as Perrego was hounding him for the No. 2 position.

But because they were in heavy lapped traffic, all three were running in the top groove, essentially playing follow the leader for the last 10 laps.

DeLorenzo got one last shot at the win, when Tremont found his path blocked by Adam Gage on the last lap. DeLorenzo ducked to the inside and made his move, but Tremont had the momentum coming off the fourth turn for the final time, beating DeLorenzo to Rich Peterson’s checkered flags by a half-a-car length, officially 0.116 on the clock.

“I slowed just a little,” said Tremont of the last lap. “I didn’t want to bring the second-place guy with me, right to the lapped car, and have us all bunched together. I wanted to back off just a little so I could see where I could get a clear run off of four.”

“That was fun,” said DeLorenzo. “I just made a split-second-too-late decision to move to the inside on the last lap.”

The Service Tire Truck Center Dash for Cash, worth $200, went to Kris Vernold.

One of the highlights of the night was the 30-lap John Morris Memorial, presented by Roberts’ Towing, for the Lake Auto Parts street stocks. The 30-lapper was also part of the FantaSStic 4 Series between Albany-Saratoga and Glen Ridge Motorsports Park.

The John Morris Memorial was the first feature on the card, but had to endure a 15-minute rain delay. The cars were on the track when rain began, and they stayed on the track to keep it in racing shape.

Once the green flag flew, Josh Hemming jumped into the lead from his front-row starting position, but Matt Mosher, who started third, went from third to first on lap nine.

Former track champion Al Relyea soon made his presence felt, taking over the No. 2 position on the 16th lap, but two laps later, he made contact with a lapped car in turn four and spun around, bringing out the first caution of the race.

On the restart, Joey Wilson took the lead away from Mosher, but Mosher refused to give up, following Wilson lap after lap. When Wilson began to experience some handling problems on lap 23 and drifted high in the fourth turn, Mosher regained the lead.

Jason Samrov and Jeff Meltz both worked their way around Wilson’s ill-handling car on lap 25, but neither got close enough to Mosher to make a serious challenge. Mosher finished with a 1.144 second margin of victory over Samrov, with Meltz third, Wilson fourth and Hemming fifth.

Scott Duell ended a two-year drought when he held off Tim Hartman Jr. to win the 25-lap sportsman feature. Duell started 11th, and Hartman Jr. started 15th, but they became the stars of the show late in the feature, when they began to run side-by-side. Hartman Jr. drew even with Duell going down the backstretch on the last lap. But Duell, driving one of the Dick Bisson Racing team cars, had enough momentum to hold off Hartman Jr. by 0.409 seconds, giving Duell his first win since Aug. 20, 2019.

Chad Jeseo chalked up his third win of the season in the 25-lap pro stock feature. Chucky Dumblewski, who took the lead on lap 12, looked like he might record his first win of the year until a yellow came out on lap 17 for an incident involving Jay Corbin and Rob Yetman, changing the complexion of the race.

On the restart, Jason Casey began to challenge Dumbleski for the lead, with Jeseo third. But another restart on lap 21 allowed Jeseo to move into second and he never slowed down, moving to the inside of Dumblewski in the third turn and coming out of the fourth turn with the lead.

Jason Meltz, Jason Casey and Dean Chabonnneau completed the top five. The Eastwood Detailing Dash for Cash, worth $250, was also won by Jeseo.

Ron Delease came away with his first win of the season in the Haun Welding limited sportsman feature, which had to be stopped after 18 laps because of rain. The wet weather ruined what would have been a heck of a finish, as Delease, Dylan Madsen and Gerard LeClair were all in position to get the win when the rain increased enough to stop the race when the field was under caution with two laps to go.

LeClair was second when the race was stopped, with Madsen third, Tommy D’Angelo fourth and Phil Arnold fifth.