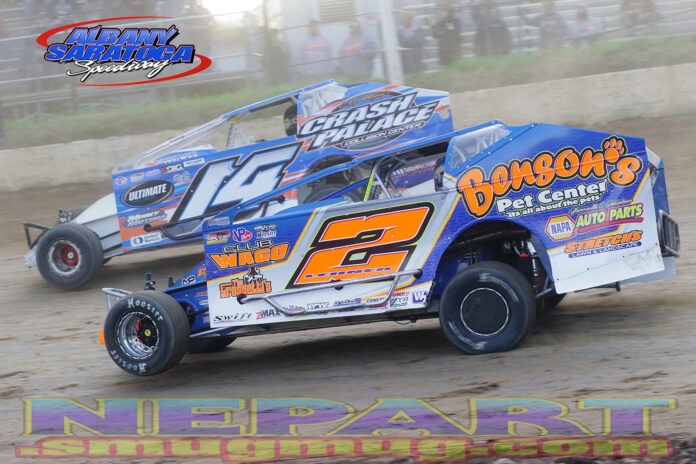 The 22-year-old “Ginja Ninja” took advantage of a miscue by veteran Don Ronca and then held off a late charge from Matt DeLorenzo to record his first career victory Friday night in the 35-lap modified feature at the historic Malta track.

Lehner, the 2018 modified Rookie of the Year at Albany-Saratoga, put on a heck of a show with Ronca. Ronca started on the outside pole and snatched the lead away from Elmo Reckner on lap 10, but Lehner, who had started eighth, quickly made his way to the leaders and was running second by lap 16.

And then, Lehner showed the patience of a veteran.

“Don was doing a good job. He really had me worried,” said Lehner, after celebrating his win with a two-beer Stone Cold Steve Austin salute in victory lane. “But I saw that a couple of times, he almost got into the wall in four (the fourth turn). I looked at the lap counter and saw there was a lot of time left, so I thought if I was patient, he might make a mistake before I did.”

Ronca survived one hiccup. On lap 20, he slipped high in the second turn after getting past the slower car of Reggie Bonner, which allowed Lehner to make up a lot of ground and pull even with Ronca.

But Ronca’s next mistake proved to be very costly. On lap 26, Ronca went over the bank in turn two, giving the lead to Lehner and watching his chances for a win go out the window.

But Lehner wasn’t home free. He still had DeLorenzo to contend with. DeLorenzo had been battling Lehner for second when Ronca went over the bank, and now, he was pressuring Lehner for the lead. But the one advantage that Lehner had was that both he and DeLorenzo were best on top. When DeLorenzo tried to switch to the inside on lap 27, he lost ground and finished about a car length behind Lehner at the finish.

“I’ve felt like we’ve been doing good, but we’ve been plagued with silly things and starting deep in the field,” said Lehner. “I had a DNF last week, which put us in a good spot tonight, and that definitely helped.”

Ronca, who wound up 11th, was dejected after the race. “I just lost it,” he said. “I just got out where it was too slippery and lost it.”

DeLorenzo finished second for the second week in a row, while defending track champion Mike Mahaney made a quiet charge from his 14th starting position to grab the third podium position. Anthony Perrego was fourth, with Peter Britten fifth.

Tim Hartman Jr. drove to his second win of the season in the 25-lap sportsman feature. The win was the 31st of his career at Albany-Saratoga, moving him to within one victory of tying Mike Ballestero for the No. 1 position on the all-time sportsman win list.

Hartman, who started 23rd in the 30-car field after being penalized a couple of spots for rough-riding in his heat race, took out his anger on the race track. With all the attention focused on the battle for the lead between Ron Proctor and Jim Nagle, few were watching Hartman Jr. slice through the field, with the first 22 laps being run under green.

Nagle got the lead on lap 15, but Hartman was up to third when the first caution flew.

Hartman Jr. followed in Nagle’s tracks in the top groove and Hartman was right on Nagle’s rear bumper at the completion of lap 23. The next time around, Hartman Jr. got a big run out of the fourth turn and he went on to nip Nagle to record his second win of the season in his new DKM chassis.

Chad Jeseo also had a lucrative night. Not only did he notch his fourth win of the year in the 25-lap pro-stock feature, but by making it to victory lane for the second straight week, he also earned a $250 Back-to-Back bonus from Eastwood Detailing.

Jeseo was able to avoid a lot of carnage in the feature, Jason Casey, Dean Charbonneau, Kim Duell, Jordan Modiano, Ed Thompson and Mike Baker were all out early. Jeseo finished over two seconds ahead of Rob Yetman, with Rich Crane third, Luke Horning fourth and Josh Coonradt fifth. Crane finished the race with no hood and with his right front fender flapping, and Coonradt had a caved in rear end.

Tyler Rapp came away with his first win of the year in the 20-lap Haun Welding limited sportsman feature. Rapp, who started 12th, wasted no time working his way to the front and squeezed inside of Gerard LeClair to take the lead on lap eight.

From there, Rapp was on cruise control, and beat runner-up Craig Wholey by over six seconds. Completing the top five were Chris Jakubiak, Bryce Breault and LeClair.

Al Relyea picked up his first win of the year in the 15-lap Lake Auto Parts street stock feature. Relyea, who started 13th, took the lead to complete lap five and outran Jimmy Duncan to get the win. The victory also put Relyea right back into the battle for the track championship, as points leader Jeff Meltz Sr. was involved in three separate incidents during the feature and brought his battered car home in 16th place.

Following Relyea and Duncan across the finish line were former champion Randy “The Wheelman” Miller, who was making his first appearance of the season, Jeff Meltz Jr. and Mike Arnold, who came from the rear of the field after being sent back for an incident with early leader Dana Van Veghten.

The USAC Bear Ridge Midgets were on the “Hoosier Daddy” Father’s Day Special card, with Justin Phillips getting the victory. Josh Sunn rocketed out of his No. 5 starting position and made a big run out of the fourth turn to snatch the lead away from Justin Sheridan on lap five, but Phillips, who started right behind Sunn, took over the No. 2 spot on lap nine, and began closing ground on Sunn.

But Phillips had other problems, namely Seth Carlson. Carlson moved into second on lap 16, but the next time around, Phillips had regained his spot, but that had also allowed Sunn to open up some breathing room.

But Phillips wasn’t done yet, and on lap 21 of the 25-lap feature, dove under Sunn to take the lead coming out the fourth turn, and Sunn could only watch as Phillips hit the finish line first.

Albany-Saratoga will be back in action Tuesday night, with the Super DIRTcar Series “Horse Power 100.” Racing will begin at 7 p.m.