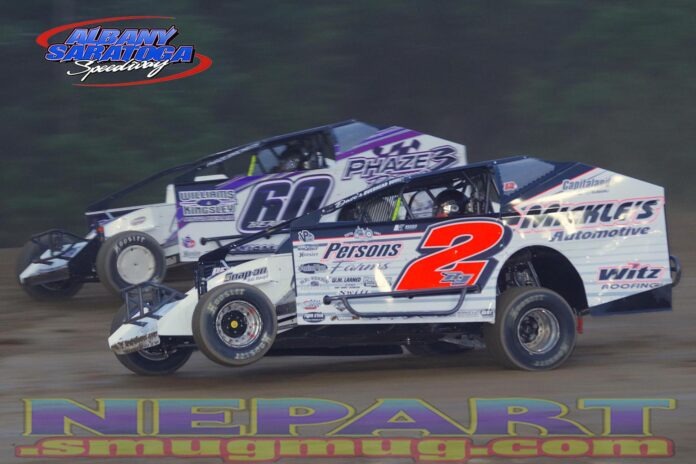 MALTA, NY – It was just like old times. There was a 12A on the track, and there was a Johnson in victory lane.

Friday night wasn’t supposed to be a tribute to the late Jack Johnson, who still sits second on Albany-Saratoga Speedway’s all-time modified win list, but it turned into an impromptu celebration when his son Ronnie drove to his first win of the year in the 35-lap modified feature at the historic Malta track.

Ronnie Johnson had to hold off a late charge by Anthony Perrego to record his first win since Aug. 16, 2019.

When the modified field came out of the pits, it was being paced by a vintage Jack Johnson replica 12A, driven by Larry Lawler. Prior to the feature, Lawler and three of Jumpin’ Jack’s former sponsors – Frank Witz, John Engle and Bryan Roberts – had chipped in to create a $500 bonus for the leader of lap 12 of the modified feature.

As if written from a script, Ronnie Johnson, who had started 13th, took the lead on lap 12, rocketing around Elmo Reckner coming out of the fourth turn.

With 15 straight laps being running under green, Johnson opened up a huge lead, while Reckner, Adam Pierson and defending track champion Mike Mahaney battled behind him.

Mahaney, who had started 14th, took over the No. 2 position on lap 19 and two laps later, charged into second, but by then Johnson had a full straightaway advantage.

That all changed on lap 24, when Ricky Davis slowed in turn two to bring out the caution. Mahaney got a chance to start right next to Johnson, but sitting in third was Perrego, who worked his way up from his 15th starting position by pounding the cushion.

Jumping right to the top, Perrego took over second on lap 25, before Derrick McGrew Jr. brought out another yellow.

On the next restart, Jessey Mueller tried to poke his nose into a hole next to Perrego, but Perrego held his line and continued to pursue Johnson.

But Johnson knows Albany-Saratoga like the back of his hand, and used every inch of track to hold Perrego at bay.

“I just couldn’t exit (turn) three like I was doing in two,” said Perrego. “I was a little tight at the end.”

Nick Lussier parlayed a front-row starting position into a much-needed victory in the 25-lap sportsman feature. The win was Lussier’s first since Aug. 12, 2015, when he won one of the sportsman features that were run on the night of Brett Hearn’s “Big Show.”

Lussier easily outran 12-year-old Brock Pinkerous, who has leapfrogged from slingshots to limited sportsman to sportsman this season. Mike Ballestero, the winningest sportsman driver in Albany-Saratoga history, was third.

Chas Jeseo had a lucrative night by chalking up his third straight win in the 25-lap pro stock feature. The race paid $1,000 to win through sponsorship by Ghentwood Products, and Jeseo also picked up a $250 bonus courtesy of the Eastwood Detailing back-to-back challenge.

But for a long time, Jeseo wasn’t even a factor. Dean Charbonneau moved to the front on lap five, and was soon in a heated battle with Scott Towslee and Rob Yetman. Yetman, who had started ninth, was in third by lap nine and took over the No. 2 spot as he completed lap 10.

A caution on lap 14 allowed Yetman to move alongside Charbonneau and after charging into the lead on the restart, Yetman began to pull away. But on lap18, Towslee, Charbonneau, Chucky Dumblewski and Jeseo tried to come out of the fourth turn four-wide, which was a big mistake. Towslee and Charbonneau wound up in the outside wall, and Jeseo escaped to come out in third, behind Yetman and Dumblewski.

Jeseo used the restart to take over second and pulled even with Yetman on lap 21.

Zach Buff drove to his third win of the season in the 20-lap Haun Welding limited sportsman feature. Buff, who started ninth, took the lead for good on lap 11 and finished with a comfortable lead over Chris Jakubiak, who was involved in a first-lap tangle and battled all the way back from the rear of the field. James Venditti, who has joined the Friday night field at Albany-Saratoga with his brother Joe, finished third

The limited sportsmen were the featured division in the Service Tire Truck Center bonus, with Chris Crane Jr. winning the four-lap Dash for Cash and pocketing $200.

Al Relyea came away with his second straight win in the 15-lap Lake Auto Parts street stock feature. Relyea started smoking heavily on lap 10, but never backed off and took the lead with two to go. He then had to survive two late restarts to hold off Mike Arnold for the win.

“It was still running,” joked Relyea in victory lane after the race. “I lost the power steering, so it could have been power steering oil.”

The street stocks were part of Ron Mensing’s Native Pride program Friday, with $100 bonuses going to predetermined finishing positions. Earning the bonuses were Relyea (first), Duncan (third), Jeff Meltz Jr. (seventh) and Tim McFarland (11th). The fifth payout was supposed to go to the 16th place car, but only 15 started the feature..

Jaxson Ryan dominated the four-cylinder feature, easily running away from the field for his fourth win of the year. Jon Sheppard finished fourth overall and had the first single-cam car across the finish line.