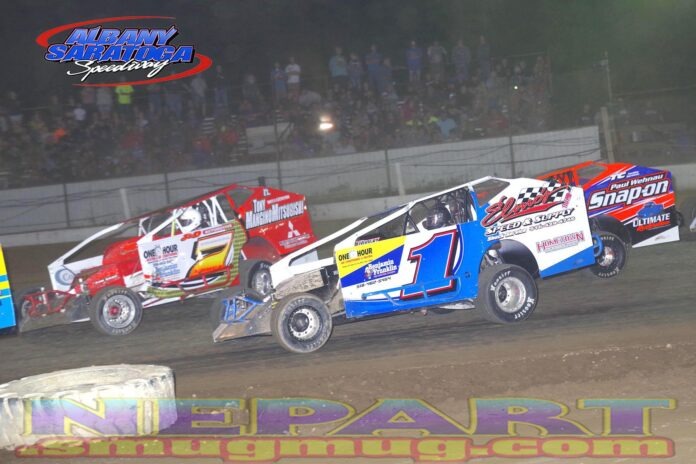 MALTA, NY – When you haven’t won a race in over 10 years, it’s only natural that a little self-doubt would start to creep in.

But Rich Ronca doesn’t have to worry about that anymore.

Ronca continued the 2021 season of surprises at Albany-Saratoga Speedway Friday night, leading flag-to-flag to win the 35-lap modified feature, his first victory ever on dirt at the historic Malta track.

But the win wasn’t the first of Ronca’s career. The first time he went to victory lane was Sept. 10, 2010, the first season that former promoter Bruce Richards decided to put asphalt over the Malta clay.

“You know, I was really starting to wonder,” said Ronca in victory lane, when asked if he ever thought he would win another race.

Everything fell into place for Ronca Friday night. A late afternoon storm completely soaked Albany-Saratoga, and promoter Lyle DeVore and his crew did an excellent job getting the racing surface ready for a 7 p.m. start. The extra work resulted in a hard, dry and very slippery surface.

“It was really slick, like glass,” said Don Ronca. “But it worked to our advantage, apparently.”

Wait. Don Ronca? Yes, the elder of the Ronca brothers was also a big part of this story.

While Rich came off the pole and began setting the pace, sticking to the inside groove, Don Ronca, who started fourth, immediately went to the top and was sitting second after just three laps.

And that’s the way the Ronca boys continued to race, even when they got into traffic. But that proved to be a problem for Rich, who caught the back of the pack by lap 15.

When Rich, who was determined to run the bottom, got trapped behind the lapped car of Kris Vernold, Don Ronca took the high road out of the second turn and got the lead to complete lap 21.

“When he went by me, I thought that was it,” said Rich. “I just hoped that there weren’t other cars following him that were also going to get by.”

Don Ronca couldn’t pull away from his little brother, however, and on lap 27, after working his way around a lapped car, Rich Ronca used the low groove to regain the lead.

And just when it looked like the race was going to go clean and green for all 35 laps, Neil Stratton came to a stop in the third turn, bringing out the only caution on lap 30.

That proved to be Don’s downfall. On the restart, he drifted too high in the second turn, slipped off the backstretch and could only watch as the field freight-trained by him.

Ironically, Don Ronca had made the same slip-up two weeks ago, giving up what had looked like a sure win.

“Dammit, dammit, dammit,” said Don as he walked to victory lane to congratulate his brother. His slip dropped him to 16th in the final order of finish.

When asked how hard his heart was beating during the last five laps, Rich Ronca replied, ”I tried not to think about it. I just tried to hit my marks. There was a huge puddle in the second turn that I made sure I didn’t hit.”

Connor Cleveland also ended a drought, albeit not as long as Ronca’s, in the 25-lap Mark Hughes Memorial sportsman feature. Cleveland, the 2019 track champion, hadn’t won a race since opening day of the 2020 season.

Cleveland, who has had trouble during qualifying races all year, started 16th in the 28-car field, but once the race got under way, he was on a mission. With Fred Proctor and Jeff Washburn battling for the early lead, Cleveland made his way up to third after just eight laps.

Cleveland then used a restart on lap nine to move into second and only needed two more laps to move out front.

Jim Nagle, looking for his second win of the year, moved into second on the same lap that Cleveland took the lead, but Nagle was no match for Cleveland. Tim Hartman Jr., who started 15th, finished third, with David Boisclair fourth, and Washburn fifth.

Nick Arnold chalked up his first career win in the 20-lap Haun Welding limited sportsman feature. Arnold started on the pole, which allowed him to avoid a lot of carnage that took place behind him. One of the early victims was points leader Dylan Madsen, who was involved in a multi-car tanglei n the fourth turn on the first lap, resulting in a flat tire.

Chris Crane Jr., who earlier had won the Service Tire Truck Centers Dash for Cash, which put an extra $200 in his pocket, started third and was the first car behind Arnold by lap seven, but that’s where he wound up, as Arnold never made a mistake.

Taylor Wason finished third, with Bryce Breault fourth and Mike Parodi, who was also involved in an early incident, fifth. Madsen battled back to finish sixth.

Josh Coonradt won the 25-lap pro stock feature, his third win of the year at Albany-Saratoga, and ended Chad Jeseo’s three-race winning streak in the process. Coonradt finished with a five-second advantage over Scott Towslee, while Jeseo was third.

Jeseo also picked up a $250 bonus for winning the Crane’s Oudoor Power Equipment Dash for Cash.

Marr Mosher won the 15-lap street stock feature, which was part of the FantaSStic Four Series with Glen Ridge Motorsports Park. Mosher, who started sixth, took the lead away from PJ Cram Jr on lap eight and went on to record his third win of the year, with Cram second and Kaleb Shepard third.

Damian Ward won the 15-lap four-cylinder feature, while Jon Sheppard rebounded from an early spin, finished second overall and had the first single-cam car across the finish line.