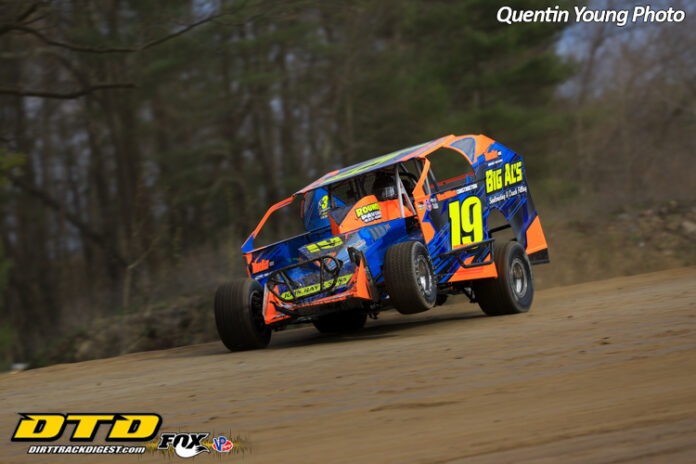 MALTA, NY – Leave it to Jessey Mueller to put the show back into showtime.

Mueller did everything but pull a rabbit out of his helmet Friday night as he recorded his first victory of the season in a wildly entertaining 35-lap modified feature at Albany-Saratoga Speedway.

Included in his bag of tricks was a crazy crossover move, slamming rub rails hard enough to get a gasp from the crowd and a costly mistake that wasn’t costly at all.

When it was all over, Mueller was celebrating in victory lane, the 10th different modified winner this season. Mueller’s last win at Albany-Saratoga came on May 17, 2019, as he suffered through a winless campaign in 2020.

“We beat the best of the best tonight,” he said, with that huge, trademark Mueller smile. “This is the way I wanted to do it.”


The 35-lap feature was wild from the start, with Brian Berger, CG Morey and Derrick McGrew Jr. coming out of the first three starting spots and quickly getting strung out in front of the field.

Marc Johnson began working the top as soon as the green flag fell and after five laps, was already in the top six from his 10th starting position. Recognizing that the top was coming in quickly, Mueller, who had started 11th, began following in Johnson’s tire tracks.

Then all hell broke loose.

Adam Pierson brought the first yellow of the feature on lap 13, and on the restart, both Berger and Morey began to drift over the cushion in the first turn. They both kept their cars under control, but they also set off a chain reaction

McGrew Jr. dove to the inside, but as he got out of the gas, was hit from behind by Derek Bornt, spinning McGrew Jr. around. Johnson slammed into McGrew Jr.’s car, but somehow managed to keep going, losing only a couple of positions. But the chain reaction also gobbled up Ken Tremont Jr., Anthony Perrego and Matt DeLorenzo, with Tremont coming out of a puddle at the bottom of the second turn with the 115 covered in mud.

On the subsequent restart, Morey again slipped to the right, allowing Kris Vernold to take over second and Marc Johnson to pick up the No. 3 spot.

Things were just starting to get good. Working the low line, Johnson got around Berger coming out of the second turn to take the lead on lap 16 and Mueller used a restart on lap 19 to take over second, with Peter Britten quickly moving into third.

Keith Flach brought a yellow on lap 20 when he wound up in the fourth turn wall after contact with Morey, and Mueller then began setting up Johnson. Johnson kept drifting up coming out of the turns to block Mueller’s run in the high groove, but Mueller quickly recognized that strategy. Timing his move perfectly, Mueller dove to the inside in the fourth turn to pull even with Johnson and then went right back to the top in the first turn, momentarily taking the lead. But Mueller couldn’t hold his momentum going through the second turn and had to check up. Heading down the backstretch, Johnson was back in front.

That bobble in the second turn allowed Britten to take over the No. 2 position. But Mueller wasn’t done yet.

On lap 26, Mueller and Britten were racing side-by-side, and made heavy contact coming out of the fourth turn. But Mueller was able to keep his car in a straight line, regaining the No. 2 spot and the next time around, he took the lead away from Johnson, who appeared to be developing handling problems, probably from the earlier incident in the first turn.

Mueller went on to pick up the win, with Britten getting second after passing Johnson with five laps to go. Defending track champion Mike Mahaney also got past Johnson in the late stages of the race to finish third, while Perrego came from the rear of the field to nail down the No. 5 spot and keep his lead in the points race.

“I couldn’t be happier,” said Mueller. “I had a great race with Marc, and Britten and I hit so hard, I thought we were going to wreck. But I rebounded and went by both of them.”

Scott Duell recorded his second win of the year in the 25-lap sportsman feature. Duell was ready to settle for second, but a restart with two laps to go gave him another shot at leader Pat Jones, and he passed Jones coming out of the fourth turn on the final lap to get the win. Jones, who was just 0.228 seconds behind, was followed by Dan Grignon, Chris Johnson and Tim Hartman Jr.

Scott Towslee picked up his first win of the year in the 25-lap pro stock feature. Towslee, who started sixth, only needed five laps to get around polesitter Jordan Modiano and from there had clear sailing. Chad Jeseo had to work his way through the pack and moved into the No. 2 spot on lap 17, but was never a serious challenger for Towslee. Modiano earned the third podium spot.

Taylor Wason won the 20-lap Haun Welding limited sportsman feature. Despite starting 10th, Wason began to make his presence felt early, and got around both Chris Bisson and Scott Bennett to move into second on lap 10.

A restart on lap 11 allowed Wason to rocket by Dan Seguin to take the lead and he finished with a comfortable margin of victory over Dylan Madsen. Bennett hung on for third.

Mike Parodi won the Service Tire Truck Centers limited sportsman Dash for Cash, which was worth $225. The bonus included $25 from Adelyn Miller, who had set up a lemonade stand in the parking lot during the afternoon.

Matt Mosher came away with his third win of the year in the 15-lap Lake Auto Parts street stock feature. Mosher, who started fifth, took the lead on lap three and set the pace for the rest of the race, even though he had some of PJ Cram Jr.’s sheet metal dangling off his right rear fender, the result of an incident early in the race. Cram Jr. crossed the finish line second, holding off defending champion Jeff Meltz by 0.014 seconds in a photo finish.

The Tobias slingshot tour made a stop at Albany-Saratoga Friday night, with Nathaniel Boesse winning the 15-lap feature. The race had to be red-flagged on the second lap, when Tavien Blowers got into Andrew Turpin in the second turn. Turpin began to spin, and was hit hard by Don Boonstra, sending Turpin into a wild flip.

Brett Putnam grabbed the lead from the outside of the first row and set the pace for seven laps, when he suddenly pulled into the pits. That gave the lead to Boesse, who had started eighth, and that’s where he stayed. Blowers finished second, after being sent to the rear for his involvement in the Turpin incident, and Albany-Saratoga street stock regular Jimmy Duncan finished third. Twelve-year-old Brock Pinkerous, who regularly runs a sportsman at Albany-Saratoga, finished fourth overall to win the junior slingshot division.

The next racing card, on July 23, will include the Empire Super Sprints.