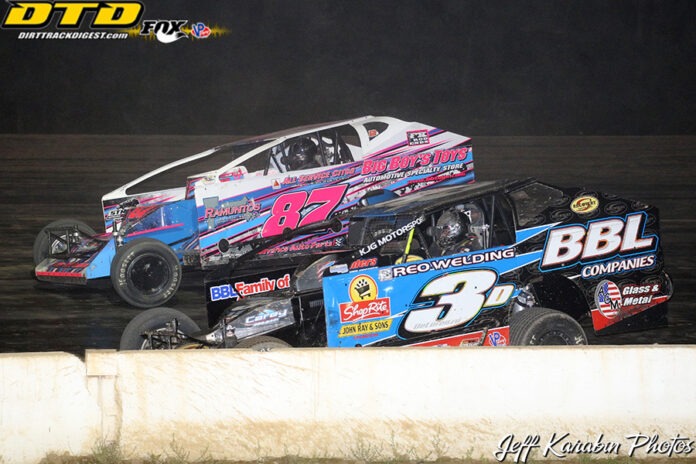 MALTA, NY – Earlier this season, Matt DeLorenzo joked that he was just trying to keep the fans happy after back-to-back, second-place photo finishes at Albany-Saratoga Speedway.

He kept the fans entertained with another close finish Friday night, but this time, he also recorded his first win of the year in the 32-lap modified feature on “Stan Da’ Man Night” at the Malta track.

The night was a tribute to Albany-Saratoga promoter Lyle DeVore’s father, who died in 2016. Stan DeVore, an avid custom car enthusiast, loved ’32 Fords, so Friday night’s feature paid $3,200 to win. In addition, the modified heat winners each received $320 bonuses from Grady’s Vintage Photos, and DeLorenzo also walked off with some of that cash.

DeLorenzo readily admitted that starting fourth was a huge help as he became the 13th different modified winner this season.

But for a while, it looked like “Stan Da’ Man Night” was going to be “Karma Night.”

James Meehan, who runs the No. 32C modified, started on the pole and quickly moved out to a comfortable lead. DeLorenzo, who was running the low line early in the race, moved into third on lap nine and two laps later, snuck inside of Don Ronca for second.

Meehan, who was running against the cushion, began catching slower cars on lap 15, and when DeLorenzo got into lapped traffic, he also moved to the top.

But then racing luck reared its ugly head. On lap 21, Meehan blew the corner heading into the first turn and drifted off the racing surface, allowing DeLorenzo to take the lead and moving Ken Tremont Jr., who had started 10th, into third. The slip dropped Meehan back to fourth.

The first yellow came out on lap 27 for Kris Vernold, after DeLorenzo had opened up a comfortable lead. When the green flag came back up, Meehan’s motor let go, spewing liquid over the racing surface and forcing many of the cars behind him to scatter.

On the next restart, DeLorenzo got another good jump, but CG Morey brought out a second yellow of lap 28, giving Tremont one more chance. But DeLorenzo was just too tough, and came away with his first win of the year.

He was followed by Tremont, Mike Mahaney, Marc Johnson and Anthony Perrego. Perrego the points leader, made up the most ground after starting 16th.

“I was just trying to keep it straight and not jump the cushion, like I normally do,” said DeLorenzo in victory lane. “My tires were going away. I didn’t want Tremont to beat me by a half-a-car length again.”

Tremont said that if the race had stayed green, he thinks he could have caught DeLorenzo.

“I just needed to run the bottom with a little more momentum. There was plenty of room down there,” he said. “But he was just better at the end.”

The other heat race winners picking up the $320 bonuses were Meehan and Mahaney.

Paying homage to Stan DeVore’s vocation as a mason, the sportsman ran a 32-lap “Flying Trowel” feature, with defending champion Tim Hartman Jr. getting the win and the winner’s payoff of $1.320.

But more importantly, the win was the 32nd of Hartman Jr.’s career at the historic Malta track, moving him into a tie with Mike Ballestero for the No. 1 spot of the all-time win list.

Hartman Jr. started 16th in the field, but because of a couple of early cautions, quicky made his way into the top five. Hugging the low line and taking the shortest way around the racing surface, Hartman Jr. moved inside Joey Scarborough coming out of the second turn to take the lead on lap 19, and that’s the way they finished, with Hartman Jr. beating Scarborough to the checkered flag by almost three seconds.

Ballestero had one of his best runs of the season, nipping Marty Kelly III for third, while Travis Witbeck completed the top five.

“This was an awesome night,” said Hartman Jr. in victory lane. “To get a win for Lyle and his family, to get the extra money and it was especially cool to tie for the top of the win list. That’s something I’ve been shooting for for a long time.”

Chad Jeseo took another step closer to the pro-stock division title with his sixth victory of the year in that division’s 25-lap feature. Shane Henderson started on the pole and set the early pace before giving up the top spot to Stormin’ Norman Loubier. But the man on the move was Kim Duell. After starting eighth, he moved into third on lap seven and two laps later, took second away from Henderson.

It took Duell just one more lap to put the Curtis Lumber Wagon out on the point and he was cruising along until the only caution of the race came out on lap 22.

Jeseo, who had started 12th, lined up next to Duell and got a huge run off the top to take the lead on the restart, leaving Duell to settle for second.

“In the beginning, I couldn’t even move,” said Jeseo. “I just kept searching until I found something.”

Chris Jakubiak recorded his second consecutive win and third of the year in the 20-lap Haun Welding limited sportsman feature. Jakubiak started 14th, but was up to second, behind leader Joe Venditti, after 11 laps.

The 14-year-old Venditti was driving like a veteran. Although he was moving around lapped cars with relative ease, he did have a scary moment on lap 12, when he made contact with Dylan Grogan, but he was able to maintain his lead.

But two restarts proved to be Venditti’s downfall, as Jakubiak switched to the outside line and finally got the lead coming out of the fourth turn on lap 17

Kaleb Shepard notched his second win of the year in the 20-lap Lake Auto Parts street stock feature, which went caution-free. Shepard, who started sixth, took the lead away from Nick Napoli on lap 10, and then held off Jimmy Duncan for the victory.

The four-cylinders were also in action Friday night, with Jaxson Ryan dominating the 15-lap feature to chalk up his sixth win of the season. David Frame and Damian Ward finished second and third, respectively, with Robert Garney fourth overall and first in the single-cam division. Daniel Joubert, also driving a single-cam car, completed the top five.