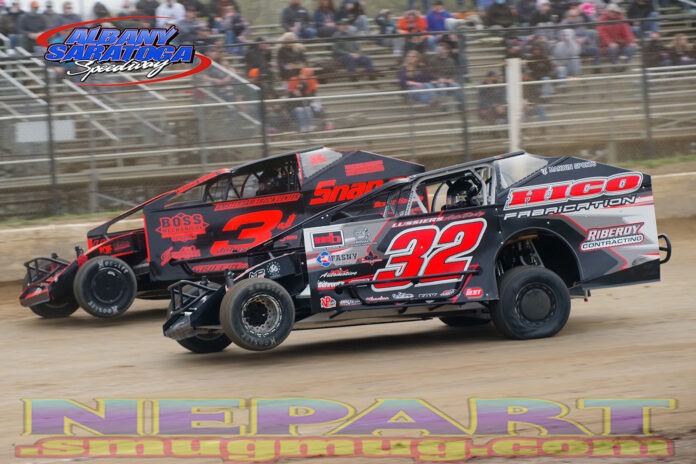 MALTA – Seven days ago, James Meehan was writing what he thought would be another chapter in his racing life, but he couldn’t come up with the ending he wanted.

On Friday night, he properly finished the chapter.

After a bizarre set of circumstances prevented him from getting a win on July 30, Meehan started on the pole Friday night and never gave up the lead, walking off with his first career modified victory in the 35-lap feature that highlighted John Grady Memorial Nostalgia Night at Albany-Saratoga Speedway.

Because of extra money put into the purse by Chris Grady in honor of his late father, the former track photographer at Albany-Saratoga, Meehan earned $3,000 for the win.

“This is special,” the 28-year-old Meehan said in victory lane after the win. “My brother Patrick, my crew, we all put so much work into this. This is really important to us.”

Two weeks ago, Meehan started from the pole and led the first 20 laps before he blew the first turn on lap 21, giving the lead to eventual winner Matt DeLorenzo. To make matters worse, Meehan then had an oil line break on a restart on lap 28, and was done for the night.

It was déjà vu on Friday, with Meehan again starting from the pole and setting the pace. But it also seemed like the breaks were going his way.

He came up on some slower cars by lap 10, but he never really had to any maneuvering around them. First, Bob Schmidt and John Lutes Jr. pulled into the infield, and then Brandon Jacobs did the same thing, on lap 14, leaving Meehan’s run on the point unobstructed.

There was some great racing going on behind Meehan. Rich Ronca, looking for his second win of the year, moved into third on lap 20, hugging the inside all the way around. On lap 25, Ronca squeezed past Kris Vernold for second, and Demetrios Drellos, who had been watching Ronca’s line, followed and took over third.

The duo began closing on Meehan, who was now in heavier traffic, and the first yellow of the race came out on lap 29, when Vernold got into the wall in turn four.

Although Meehan had the choice of lanes, Ronca stayed on the inside, so on the restart, Meehan fired early, creating a no start and setting up another restart, this time with Meehan on the inside after Ronca relinquished the spot.

“He wouldn’t give me the inside,” said Meehan as he talked about the restart. “I knew where I wanted to be.”

Meehan then got the jump on the second restart in his Enders­-powered Bicknell chassis and came away with his first career win.

The battle for second was a photo finish with Adam Pierson, Ronca and DeLorenzo hitting the finish line three-wide. Pierson came away with the runnerup spot, his best modified finish ever at Albany-Saratoga, .051 seconds ahead of Ronca, and DeLorenzo another half-second back In fourth.

Points leader Anthony Perrego, who started 15th, worked his way up to fifth, even though announcer Dan Martin didn’t say his name once during the Dirt Track Digest TV live stream because of all the action at the front of the pack.

Ronca had to be pushed back to the pits after an on-track picture session, as the battery in his car went dead. “Yeah, before the caution, I thought I could have caught him,” he said. “But after the caution, the car got too tight.”

Jim Nagle picked up his second win of the year in the 25-lap sportsman feature, which was worth $1,000 to win. Jim Osgood, who started third and was looking for his first career win, got a good jump on a restart on lap 10 to take the lead, but another restart proved to Osgood’s downfall. On a restart on lap 18, Nagle and Tim Hartman Jr. both rocketed by Osgood, and Nagle easily led the final seven laps to get the win.

Chad Jeseo outdueled longtime rival Rob Yetman to win the 25-lap pro stock feature, which was also worth $1,000 to the winner. The victory was Jeseo’s seventh of the year. Rich Crane, Jason Casey and Scott Towslee completed the top five.

The 20-lap Haun Welding limited sportsman feature turned into a summer rerun, with Chris Jakubiak recording his third straight win and fourth of the season, finishing ahead of Joe Venditti. The duo finished the same away the previous week.

Brandon Jacobson, who started fourth, took the lead on lap six, but Venditti, who started seventh, and Jakubiak, who was 16th on the starting grid, were right behind the leader by lap 10.

On lap 15, Jacobsen got trapped behind the slower car of Dave Fachini coming out of the fourth turn, and the top three accordioned together. Jakubiak got into Jacobsen, which knocked Jacobsen out of shape. That allowed Venditti to grab the lead, but that only lasted for another lap, as Jakubiak got inside Venditti coming out of the fourth turn on lap 17 and was out in front for the rest of the way. Following Venditti across the finish line were Jacobsen, Tommy D’Angelo and Nick Arnold.

Al Relyea moved another step closer to the Lake Auto Parts street stock championship with his third win of the year in the 20-lap feature. Relyea did some masterful driving early in the race, first slicing down the middle between two other cars to move up to sixth, and then nimbly veering around the slower car of John Hemming to take over fourth on lap seven.

A restart on lap eight allowed him to move into over third, and the next time around, he slipped past Jason Samrov for second.

All that time, Dan Madigan had been setting the pace from his pole starting position but on lap 14, Relyea, who had been racing just off Madigan’s right rear quarterpanel, used his momentum coming out of the fourth turn to get the lead on lap 13.

After the race was red-flagged because of a violent crash involving Mike Arnold and Jimmy Duncan, Madigan regained the lead on the restart on lap 14., but Relyea moved back out front, this time for good, one lap later to get his third win.