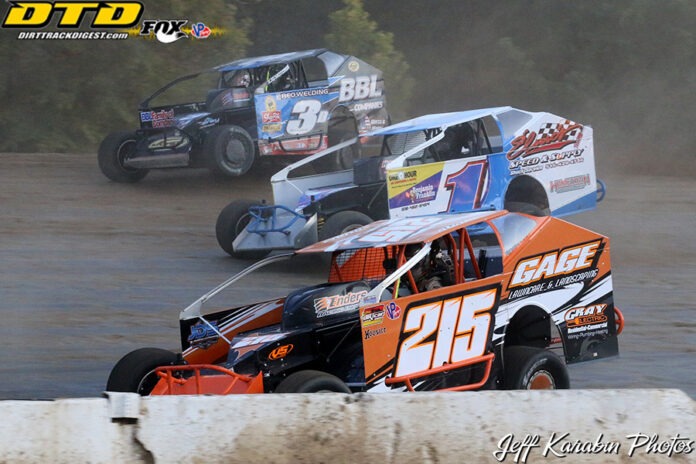 MALTA, NY – On Champions Night, the champions should get all the glory.

Anthony Perrego, who began racing fulltime at Albany-Saratoga Speedway during the 2020 pandemic-shortened season, finished eighth to lock up his first modified championship.

But this one was all Pierson, who became the 15th different modified driver to sit in victory lane this season, and the third to chalk up his first career victory. Pierson had made sporadic visits to Albany-Saratoga in the past. but this is his first season running fulltime on Friday nights

Was he shocked to be in victory lane?

“Yes, absolutely,” he said with a big smile. “When I was running sportsman, I always felt like I could win anywhere I went, but here, I thought running in the top 10 would be a bonus. I’ve had a couple of good runs, including a second (on Aug. 6), so I guess tonight was just our night.”

The night also had a somber feeling, as the management at the track honored the 13 U.S. troops who were the final casualties of the war in Afghanistan. The American flag flew at half-staff, thirteen seats were left empty in the top row of the bleachers, and the 13th starting spot in each feature was left open, in a missing man formation.

The first half-dozen laps of the modified feature saw Pierson and Don Ronca locked in a side-by-side battle behind pole-sitter Matt Depew., who was running the top. Once Pierson dispatched Ronca, he also moved to the top and began riding in Depew’s tracks.

Pierson made the move of the race on lap 13, diving to the bottom and getting a nose in front as he and Depew passed under flagger Rich Peterson.

The next time around, Pierson had cleared Depew, and quickly moved back to the top, where he spent the rest of the night.

Thirteen-time champion Ken Tremont Jr., who started sixth, got inside Depew for second on lap 20, but by that time, Pierson had a half-a-straightaway lead and was having no problem with lapped cars, as he was running so high that no one was in his path.

At the finish, Pierson had a 1.133 second lead over Tremont in his Adam Gage-owned modified, with Jack Lehner, Marc Johnson and Mike Mahaney completing the top five.

“I like the top and it really seemed to work well tonight,” said Pierson. “And all the lapped cars did really well, giving me a lot of room.”

Ronnie Johnson won the Service Truck Tire Centers Dash for Cash, earning a $200 bonus in a four-lap race that looked like he and Jessey Mueller, who finished second, were running for $10,000.

Tim Hartman Jr. (sportsman) and Chad Jeseo (pro stocks) were also honored as 2021 champions, even though they had officially cliched their titles the previous week. Hartman Jr.’s title was the third of his career, while Jeseo won his second pro stock crown. Neither one was able to put the icing on their championships with a win, however.

Pat Jones won the 25-lap West End Towing and Repair Sportsman Special, taking home the top prize of $1,000. The win was Jones’ second of the season, as he also sat in victory lane on April 23.

Jones wasted no time taking control of the feature. He started ninth, but was on the move as soon as the green flag dropped and was already in the top three when a caution flew on lap 11.

Jones took over the No. 2 spot after the restart, and then moved to the top and quickly caught leader Brandon Gibbons. Jones pulled even with Gibbons to complete lap 15, and the next time around, took the lead going back the backstretch.

Jones pulled away from Gibbons in the final stages of the race and hit the finish line over two-seconds ahead of Gibbons, who had the best finish of his career. They were followed by Chris Johnson, Dan Grignon and David Boisclair.

Part of the West End Sportsman Special was a random draw for a gift certificate for a new Bicknell outer body. To be eligible, a driver had to finish on the lead lap of Friday night’s feature and also had to have perfect attendance for the season. Jones picked the winner after the feature, with the prize going to Scott Duell.

Jason Meltz scored his second straight win in the 25-lap pro stock feature, and walked off with a good chuck of change. The race paid $1,000 to win, courtesy of Classic Muscle Cars, and Meltz also earned a $250 bonus from Eastwood Detailing for back-to-back victories.

“It took me a long time to get my first win, so to get the second the next week is pretty incredible,” said Meltz.

Jon Coon recorded his first win of the season in the 20-lap Haun Welding limited sportsman feature. Coon started on the outside pole and took the lead on lap three. All the attention was then focused on points leader Dylan Madsen, who had started 16th and was on a mission. Despite getting hit hard in the front straightaway on lap three and suffering some body damage, Madsen kept charging and worked his way up to second by lap 15, but that was as far as he would get.

Matt Mosher picked up his fifth win of the year in the 25-lap street stock feature, which had an increased purse, including $500 to win, through sponsorship by Meltz Lumber.

Mosher started eighth, but quickly made his way to the front, running side-by-side with Jason Samrov, who had started on the pole.

A restart on lap 10, after Mike Arnold lost the driveshaft in his car, allowed Mosher to edge past Samrov and once he got into lapped traffic, Mosher pulled away from Samrov and Al Relyea to get the win.

Jaxson Ryan recorded his fourth straight win and ninth of the season in the 15-lap four-cylinder feature, easily outrunning David Frame and Damian Ward. Alanna Jordan picked up a ride in the Jon Sheppard 99s and finished sixth overall and first in the single-cam division.

Champions in the limited sportsman, street stock and four-cylinders divisions will be decided on Sept. 10.