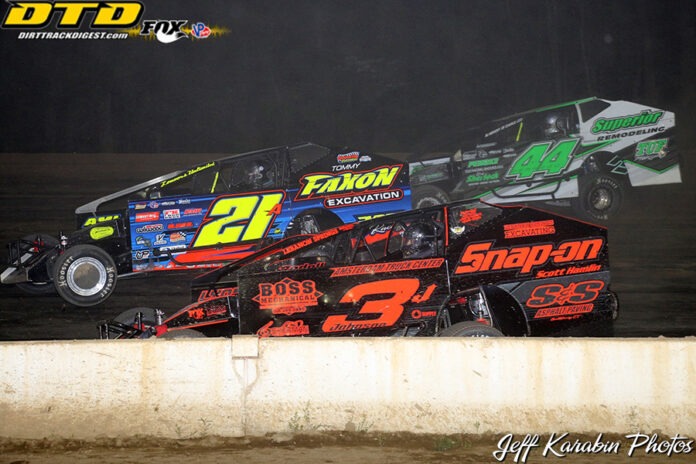 MALTA, NY – Leave it to Marc Johnson to find something negative about a $3,500 victory.

“I hate starting on the pole,” said the Guilderland, N.Y. driver after leading flag-to-flag to win Friday night’s 35-lap modified feature at Albany-Saratoga Speedway, his season-leading third win of the season.

The extra money at the top of the modified purse came from sponsorship by Ron Mensing’s Native Pride program and Dirt Track Digest.

With the modified point race over, Friday night’s event featured a draw for heats and a redraw for the top three finishers in each heat race. Johnson, who finished third in the second heat, drew the pole. Most drivers would love that opportunity.

“No, really, I hate starting on the pole,” Johnson reiterated. “There’s only one way to go from there.”

Unless you go forward from the start, and lead every lap.

Johnson’s win highlighted Military, Law Enforcement, Fire and Rescue Night, which featured a color guard by the Patriot Guard riders and a tribute to four Gold Star families who suffered the loss of loved ones serving in the military in the last year.

While Marc Johnson was setting the pace at the front of the field, crowd favorite Ronnie Johnson kept his legion of fans on their feet with a quick charge. After starting seventh, Johnson only needed 11 laps to take the No. 2 spot away from 2021 track champion Anthony Perrego, who had started third.

There was also another No. 44 in the field, as Stewart Friesen was making his second appearance of the year at the Malta track. Friesen had a poor qualifying run and lined up 14th for the original start, but he worked the top for the first 10 laps of the race, and rocketed up to sixth.

Marc Johnson was cruising on the front end and was also handling lapped traffic with ease, which allowed him to keep a comfortable advantage over Ronnie Johnson. But that all changed on lap 23, when Derrick McGrew Jr. fell off the pace, bringing out the second caution of the race.

Marc Johnson got a good jump on the restart, but suddenly, Mike Mahaney was also in the mix, moving up to third on lap 28, and looking like a contender.

But no one was going to catch Marc Johnson, so the attention turned to Friesen, who just missed the podium in the Halmar Bicknell.

“The problem was, I was tight,” said Johnson, who was coming off a second-place finish in the Vermont 200 at Devil’s Bowl, which was worth $4,000. “I was tight off, which is a good thing on a track like this, but in traffic, it cost me. I had to be careful.”

Marc Johnson’s victory on Friday night allowed him to bookend Albany-Saratoga’s regular season. He was the 56-lap “Hell or High Water” season opener on April 18. That win was worth $5,600.

The co-feature on the card was the 50-lap DIRTcar Eastern Regional Sportsman Series, and for a long time, it looked like Chad Edwards was going to breeze to a victory.

Edwards started on the pole in the iconic John Kollar Motorsports 10% and officially had the lead for the first 38 laps, although he did momentarily lose the top spot to Pat Jones going down the backstretch on lap five before regaining the lead coming out of turn four to complete the lap.

But on lap 39, Edwards slowed dramatically, then came to a stop in the second turn, handing the lead to Andrew Buff, who had started eighth. Buff then held off 2021 track champion Tim Hartman Jr. to get the win, his second of the season. Scott Duell finished third, with Brian Calabrese fourth and Robert Bublak fifth.

“It sucks for Chad,” said Buff in victory lane. “I would have liked to race with him.”

The 20-lap Haun Welding limited sportsman feature was also full of drama. Dylan Madsen entered the night with a 29-point lead over Bryce Breault in the battle for the track title. Breault, who started 14th, was strong from the start, and rocketed to his second win of the season. And just when it looked like Madsen was going lock up the championship, disaster struck.

On the final lap of the feature, Madsen came into the third turn too hot, appeared to hit the inside barrier and spun out in the fourth turn, with the majority of the field going past him. He was credited with a 19th-place finish, which allowed Breault to win the limited sportsman title for a second straight year. Unofficially, the margin of victory was seven points.

Tommy D’Angelo, who finished second in the feature, won the Service Tire Truck Centers Dash for Cash and took home a $200 bonus.

The street stock championship also came down to the final race of the season, with defending champion Jeff Meltz Sr. entering the night with a three-point lead over Al Relyea. But on the first lap of the feature, Relyea got into the rear end of the Dan Madigan machine, spun out in the fourth turn, was clipped by Cordell Younger and went off on the hook. That incident literally gave the championship to Meltz, who went on to finish third.

Pat Cram Sr., who started eighth, took the lead away from Jason Samrov on lap 15 and outran Madigan and Meltz to record his first win of the year.

Chucky Dumblewski also made his way to victory lane for the first time this season, winning the pro stock feature, nipping a hard-charging Dean Charbonneau by 0.416 seconds at the finish line. Kim Duell finished third.

Albany-Saratoga will return to action on Sept. 24 for the two-night Malta Massive Weekend, which will be highlighted by a Super DIRTcar Series race on Sept. 25.