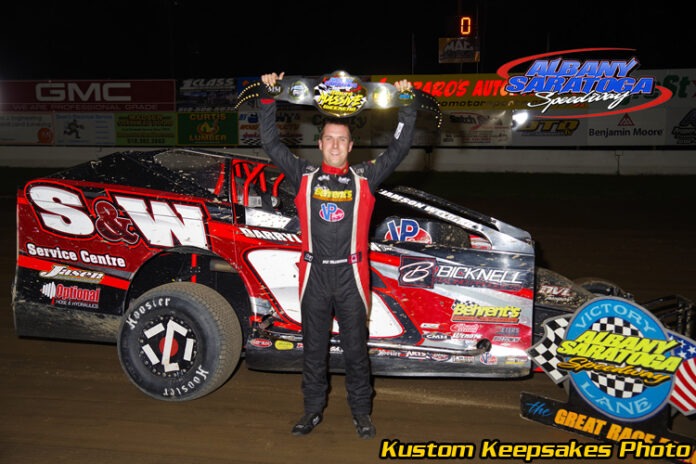 MALTA – They don’t call him “Money Mat” for nothing.

Mat Williamson, who has gained a reputation for running his best in the high-paying late-season races, enhanced that image Friday night with a wildly entertaining victory in the 50-lap “Fall Foliage” Classic for 358 modifieds that highlighted Day 1 of Malta Massive Weekend at Albany-Saratoga Speedway.

The “Fall Foliage” Classic was originally scheduled to pay $4,000 to the winner, but Dirt Track Digest TV kicked in an extra $500, and at the last minute Friday night, Bart Derocha of Bart Contracting added another $500 to the pot, allowing Williamson to walk off with a nice $5,000 payday.

Although Williamson started sixth in the 26-car field, he really wasn’t a factor until the second half of the race. But once he got going, there was no stopping him.

Ronnie Davis III and Rocky Warner, making his first appearance of the season at Malta in the Jason Simmons ride, started on the front row and waged an early battle, with Warner grabbing the lead coming out of the fourth turn on lap nine.

But they had company, as Hall of Famer Pat Ward started third in the Gypsum Express-sponsored modified and ducked inside Davis coming out of the second turn to take over second on lap 12.

A restart on lap 15 bunched the field and when racing went back to green, Ward charged past Warner coming out of the second turn to grab the lead.

Warner hung right on Ward’s rear bumper, but he also had to worry about Marc Johnson, who was now running third.

Johnson squeezed inside Warner coming out of the fourth turn on lap 21 to take over second, and three laps later, he had the lead, as Ward made contact with a slower car as he was tried to weave his way through traffic. When Ward had to check up in the front straightaway to keep his car under control, Johnson capitalized and moved to the front.

While all the attention was focused on the leaders, no one was really paying attention to Williamson, who took over the No. 2 spot on lap 26. Both he and Johnson were easily cutting through lapped cars, with Williamson running the cushion and Johnson down low.

Williamson kept inching closer to the leader, and seemed ready to pounce on lap 40, just as Ronnie Johnson slowed and brought out the caution.

On the restart, Williamson was able to find good bite on the top and took the lead away from Marc Johnson to complete lap 40, and now, Mike Mahaney joined the battle. Mahaney and Johnson ran side-by-side and Mahaney finally took over second with five laps to go.

And he wasn’t done yet. He got the nose of the George Huttig-owned car in front of Williamson in the second turn with three to go, but Williamson charged down the backstretch, regained the advantage when he took the two to go sign from starter Rich Peterson and beat Mahaney to the checkered flag by 0.383 seconds.

“Mike ran me clean and we had a great race at the end,” said Williamson after the race. “I think he would have had me if he hadn’t slipped in one and two.”

That’s not the way Mahaney saw it.

“The car felt good,” Mahaney said after taking with Huttig in the pits. “If I had to guess, Matt was probably saving something when he was leading, and when he saw me, he went back to what he had been doing.”

Williamson had been switching lanes late in the race, running low in turns one and two and then going back to the top in three and four.

Although Warner slipped to eighth, he did win the Elocin Farms 358 Dash for Cash, which was worth $500.

The co-feature on Day 1 of Malta Massive Weekend was the 75-lap Sportsman Classic, which paid $4,000 to win after Northeast Paving and Sealcoating threw in a $1,000 bonus for the winner. Chad Edwards, who looked like he was on his way to an easy win two weeks ago before suffering a late mechanical failure in the DIRTcar Eastern Region Sportsman Series 50-lapper, had everything go his way this time, and came away with the win in the Kollar Motorsports 10%.

Edwards, who started third, kept the fans on the edge of their seats with a good battle with Jim Nagle in the first third of the race, but once Edwards got the lead on lap 25, he began to dominate, easily working his way through traffic and opening up a full straightaway lead.

But that all changed when the yellow came out with five to go, and a second caution created a green-white-checkers finish, with Edwards holding off Pat Jones to record his second career win at Malta. They were followed by Andrew Buff, Brian Calabrese and Nagle.

“This is awesome,” said Edwards in victory lane. “This is the biggest win of my career. I hated to see that caution come out at the end.”

Michael’s Automotive sponsored a Dash for Cash for the top six sportsman qualifiers, with Jones getting the $200 bonus.

Also on Friday night’s card was the Winner’s Classic, a 20-lap showdown for the 15 different modified winners at Malta this season. The field was cut to 13 when Peter Britten and Matt DeLorenzo were no- shows, but that didn’t take away from the excitement.

The drama started in the revenge draw, in which the competitors drew starting spots, and then handed those spots to one of their competitors. When James Meehan drew the pole, he gave it to Rich Ronca and Adam Pierson wound up on the outside pole, thanks to Jeremy Pitts’ draw.

Pierson came out flying around the top and set the early pace, with Pitts, Ronca and Ronnie Johnson, who had started fourth, thanks to Ken Tremont Jr., right behind.

The move of the race came on lap 14, when Ronnie Johnson saw an opening coming out of the second turn, and dove low past both Ronca and Pitts to take over the No. 2 spot.

Then, just when it looked like Pierson was going to get the win, Johnson stuck his foot through the floorboard, caught Pierson coming out of the fourth turn on the last lap and beat Pierson to the finish line by 0.187 seconds.

“With two to go, I didn’t think I’d catch him,” Johnson admitted. “I was running the last few on top, but I wasn’t going anywhere, so I moved down and found something.”

Jeff Meltz Sr., the 2021 street stock champion, put bookends on his season by winning the Roberts Towing street stock feature, which paid $500 to win. Meltz’s only other win this year came in the season opener.