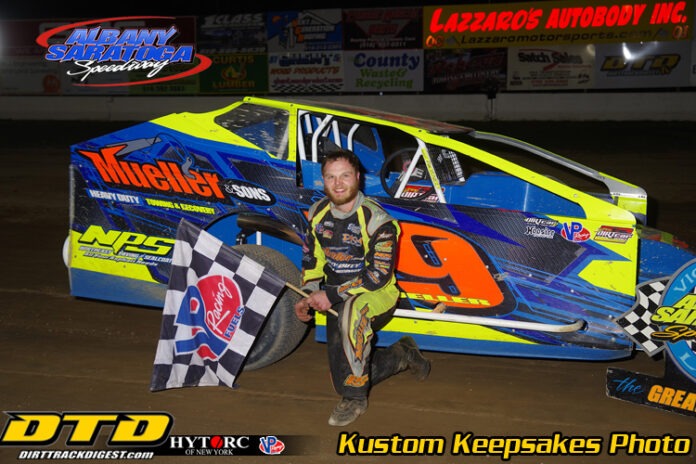 He proved that again Friday night when he held off Brian Gleason to win the 35-lap NAPA Modified feature at Albany-Saratoga Speedway.

Mueller put on a wild show while battling polesitter Jack Speshock for the lead, and then outdueled Gleason in lapped traffic to come away with his sixth career modified victory at Albany-Saratoga.

“I’ve had a fast car all three weeks,” he said after the win. “It all comes down to the car. When it’s good, I can run like this and put on a show.”

Thanks to a number of early cautions, including a yellow flag on lap three when 13-time champion Ken Tremont Jr. lost his left rear wheel, Mueller was able to move up from his ninth starting position, and used another restart on lap 12 to move around James Meehan for second place.

When Matt Depew came to a stop between the third and fourth turns on lap 16, bringing out the fifth caution of the feature, Mueller was inside Speshock for the restart.

And that’s when the fun started. On the restart, Mueller got a big run down the front straightaway and slid up in front of Speshock in the second turn to take the lead. But that only lasted the length of the backstretch, as Speshock pulled off an identical slide job between the third and fourth turns to move back out in front to complete lap 16.

But Speshock, who has had nothing but bad luck in the first two races of the season, then blew the second turn, sliding over the back and giving the top spot back to Mueller.

But with two to go, the lapped car of Bill August broke Gleason’s momentum in the second turn, and Mueller came away with the win.

“I saw him (Mueller) catching lapped traffic and it looked like he was searching a little bit,” said Gleason, who matched his best career finish at Albany-Saratoga. “I thought I had a shot at him, but when we came down the front straightaway, he (August) went right in the middle, and I thought, Oh, no.”

Kim Duell recorded his first win of the year in the 25-lap Eastwood Detailing Pro Stock feature. Ironically, Duell’s Twister chassis business was the sponsor for the race, kicking up the winner’s share to $1,000. But because he won the feature, Duell handed out the extra payoff in $100 increments to the drivers who finished second through sixth.

Duell, who started seventh, used an early incident that took out defending champion Chad Jeseo and sent two-time winner Rob Yetman to the pits for a quick check-up, to take over the No. 2 spot on lap four and it took him another 13 laps to finally get around Chucky Dumblewski for the lead.

Yetman, who didn’t seem to be bothered by the lack of some sheet metal on the right side of his car, worked his way up from the rear and was running second with two laps to go, but he then relinquished the No. 2 position to Jason Casey, while Duell pulled away.

Mike Arnold, who moved up to the Haun Welding Limited Sportsman division this year after running street stocks in 2021, notched his first career win in the 20-lap limited sportsman feature, which was marred by a red flag that left a number of race cars crumbled.

On lap 11, Scott Bennett and Brady Cordova were battling for the lead, with Arnold a few feet back in third. As the trio came out of the fourth turn, Arnold, who was on the inside, made contact with Bennett’s car, but then dove to the right to grab the lead.

As they rocketed down the front straightaway, Bennett and Cordova encountered the car of Scott Fitzgerald, which was trying to get to the pits. Bennett and Cordova jammed on their brakes, and were nearly stopped, when Taylor Wason’s car slammed into Bennett. The 313 of Jimmy Van Zandt then hit the front of Bennett’s car and flipped through the air, coming to rest on its wheels.

Arnold then went on to hold off Chris Crane Jr. for his first career win.

Jeff Meltz Sr. used a late-race charge to win the 15-lap Lake Auto Parts Street Stock feature. Meltz didn’t even get into the top four until there were only five laps left, but he then got under Matt Mosher on lap 13 to get the lead for good, and he finished with a two-second advantage over Andrew Fitzgerald.

David Frame had to work for his first win of the year in the 15-lap Greg’s Towing Four-Cylinder feature. Frame jumped into an early lead, but lost the advantage to Elmer Montville, who used a restart to move out to the point on lap four.

But Frame never gave up, and three laps later, regained the lead.

Tim Meltz finished third, and had the first single-cam car to cross the finish line.