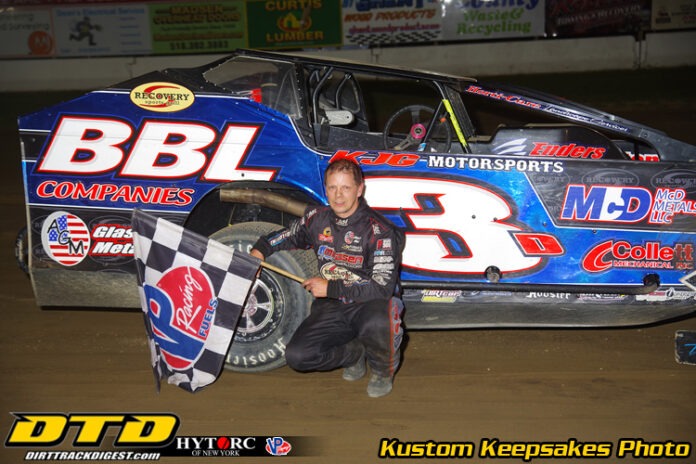 MALTA, NY – To paraphrase Michael Corleone in “The Godfather: Part III,” just when Matt DeLorenzo thought he was out of Friday night’s 35-lap NAPA Modified feature at Albany-Saratoga Speedway, he got pulled right back in.

After 25 green flag laps in Friday night’s feature, DeLorenzo, who had started 11th, was a distant fourth and wasn’t even in the conversation of who was going to get the win.

But after Keith Flach brought out the only caution of the feature on lap 25, everything changed.

On a track that had been made dry and slick by the Empire Super Sprints, DeLorenzo came out of his outside starting spot in the second row and rocketed past Marc Johnson to take over second. The next time around, he nosed ahead of leader Jack Speshock to complete lap 27 and eight circuits later, he became the first two-time winner in the NAPA Modified division at the historic Malta track.

“That caution really helped,” said DeLorenzo after his win. “I didn’t even realize I was in fourth at the time. Before the caution, I went to the outside in three and four and knew it was good, so on the restart, I just stayed up there.”

Speshock, who finished second for the second week in a row, had started fifth, moved into second on lap three and then got a big run out of turn two on lap eight and grabbed the lead away from CG Morey, who started on the outside pole.

Johnson, who had his share of mechanical problems in the last three weeks, worked his way up to second after 15 laps, but by that time, Speshock had a half-a-straightaway lead.

Johnson, who had been running the inside all night, could only watch as DeLorenzo made his big move after the restart, and when Johnson finally did move to the top when Speshock lost the lead, the move was too late, and he had to settle for third.

“Man, he (DeLorenzo) was dialed,” said Speshock after the race. “I figured someone would go to the top and make a run at me but I really didn’t think the top was that good, so I stayed on the bottom. What are you going to do?”

Joey Scarborough started on the pole and went flag-to-flag to win the 25-lap Northeast Paving & Sealcoat Sportsman feature, which paid $1,000 to win through sponsorship from Electric City Taxi.

With Scarborough enjoying a comfortable lead over Pat Jones, all eyes turned to the battle for third, between 12-year-old Brock Pinkerous and Cody Ochs, who were running side-by-side, Ochs finally got the advantage over Pinkerous with four to go, just in time for the packed grandstands to again look at the top two cars, as Jones had caught Scarborough in lapped traffic. But the checkered flag came out just in time for Scarborough, who held off Jones by two car lengths.

The Eastwood Detailing Pro Stocks also ran for $1,000 to win, with the extra money being put up by Big Hook Towing and Luke Horning’s Cousin Luke Buys Scrap Cars businesses, and for a while, it looked like Horning was going to pocket his own money.

Horning started sixth in the caution-plagued feature and only needed four laps to get into the lead. But all of the cautions also helped defending division champion Chad Jeseo to move up from his 12th starting spot, and he ducked under Jason Meltz to move into second on lap 11.

Once he got into a rhythm, Jeseo moved to the top and got the lead coming out of the fourth turn on lap 15. He dominated the final 10 laps, and finished with a 2.4 second margin over victory over Horning. Completing the top five were Chucky Dumblewski, Scott Towslee and Rob Yetman.

Chris Bisson drove to his second career win in the 20-lap Haun Welding Limited Sportsman feature, leading every lap after starting on the pole. Bisson’s big break came on lap 10, when a caution came out for a spin by Wesley Sutliff. Taylor Wason got past Bisson on the restart, but another yellow came out before the lap was completed, which put Bisson back in the led, this time in a single-file restart, and that’s where he stayed.

Jimmy Duncan picked up his first win of the season in the 20-lap Lake Auto Parts Street Stock feature. Duncan, who started fifth, took the lead away from Matt Mosher on lap five and seemed to be on his way to an easy win until a caution came out with one lap to go.

Defending division Jeff Meltz Sr. lined up next to Duncan for the final restart, and the two ran side-by-side down the backstretch. But Duncan got a slight advantage line coming out of the fourth turn, slid up to break Meltz’s momentum and hit the finish line just .074 seconds ahead of Meltz.

Mosher hung on for third, with Al Relyea fourth and Jason Samrov fifth.