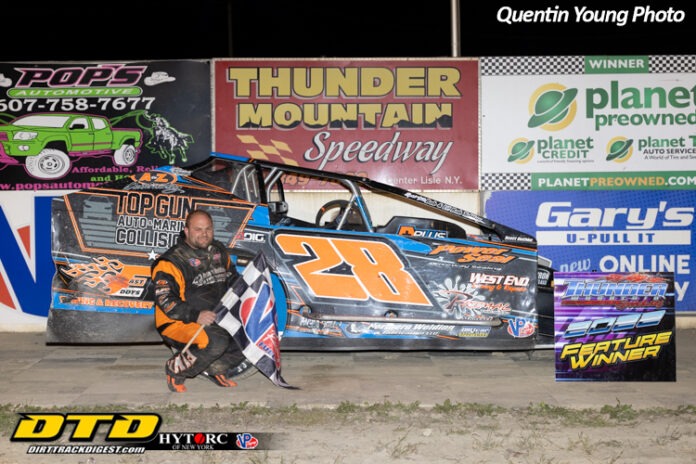 FAIR HAVEN, VT- The action is picking up in the Fastline Performance King of Dirt Racing Series presented by Swagger Factory Apparel as the new over all points updates sees  Payton Talbot and Cody McPherson leading seven different drivers including Cody Manmiller, Nick Guererri, Thomas Cook, Joe Toth, and Alan Fink to earn  championship victories this past weekend and the points are intense.

As KOD competitors progress through the process of reaching their best 12 finishes, series officials have noted they will change weekly. This week is no different, as two new drivers climbed into the top 10, while some saw their home tracks fall to mother nature. Registered drivers have been awesome in realizing how it may play out until the ultimate goal is reached.

That being said it’s time to talk about our top three featured competitors beginning with Cody McPherson, who finds himself locked into a three-way tie for the championship point lead after the leaderboard is now showing his best four race finishes. Mcpherson picked up wins at both Merrittville and Humberstone with his Willard Concrete & Trucking – Ricks Delivery Bicknell.

Payton Talbot had himself a weekend. High flying young talent behind the wheel of his Precision Hydraulic & Oil – Ted’s Body Shop number 14T HigFab chassis won races at both his home tracks as well, which include Utica Rome Speedway and Fonda Speedway. Talbot finds himself just one point out of the top spot in the overall championship point throwdown for the crown.

Our third highlight this week belongs to Alan Fink. He rolled to his third victory of the season at Thunder Mountain Speedway, which helped him climb to a two-way tie with the aforementioned Talbot with the leaderboard showing his four best finishes. Fink is finding success driving his Power Seal – Top Gun Auto number 28 Bicknell.

OVERALL KOD NOTES: Though they may have not landed in the top three highlighted drivers this week, their efforts do not go unnoticed. We’re talking about first Cody Manmiller. He picked up his first win this season at Grandview Speedway in his Westy Bar & Grill – Manmiller Electric number 00 Bicknell.

Nick Guererri is another talented driver who finally cracked victory lane at his home track the Land Of Legends. Guererri is sure to climb the standings and a win surely helps his efforts representing his home track. He pilots the Champion Products – Phelps Cement number 25G Bicknell.

Mohawk International Raceway only has three races on the books this season, but their drivers are sure to climb the ranks as they chase their best 12 finishes. One of those talents is Thomas Cook. He picked up his first win of the season driving his Big Boys Gas & Tobacco – Bailey Ford number 35.

It’s important to note some tracks suffered rain outs and others haven’t had enough races yet such as Can-Am (rain out) and Mohawk (only a few races). We stress that drivers registered from these tracks fear not, as there is plenty of time to reach your best 12. Trust the system, it will balance out. For now, keep doing an excellent job each week at your home track.