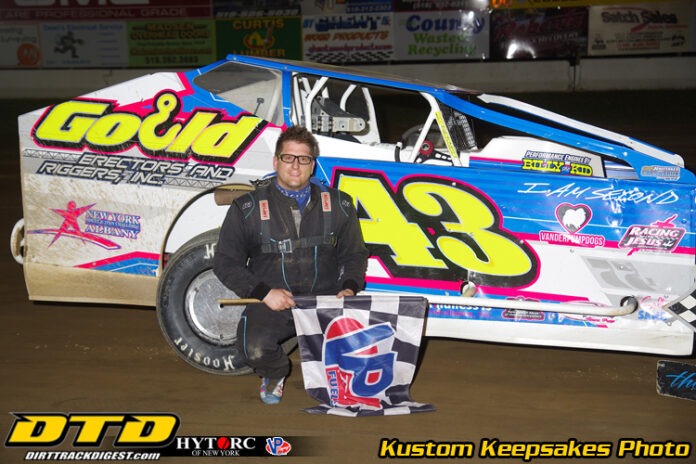 Two weeks ago, Keith Flach has mechanical problems with his car and finished 23rd in the NAPA Modified feature at Albany-Saratoga Speedway.

But that bad luck gave him a good starting position on Friday night, and he came away with his second win of the season in the 35-lap feature.

Flach, who started fourth in the field, only needed 14 laps to get to the front. But a caution on lap 27 created a nail-biting finish, with Flach holding off Matt DeLorenzo, who was seeking his second straight win.

“We’ve had good speed a lot of nights, but we can’t seem to put it all together,” said Flach in victory lane. “We had mechanical issues last week, which put us a little closer to the front this week, and that certainly helped.”

In the early going, Matt Depew, who started on the outside pole, got a big jump on a restart on lap three to move out front, but there was a ton of action going on behind him. Marc Johnson and Peter Britten, who had started seventh and eighth, respectively, were using every inch of the track to move forward, while Flach was battling Scott Huber for third.

Flach occupied the third spot after 10 laps, and three laps later, he worked his way past Rich Ronca for second.

Hooked up in the low groove, Flach then got the lead coming out of the fourth turn on lap 14, and then quickly went to the top, which was the quickest way around the speedway.

When Adam Pierson went around in the fourth turn to bring out the caution on lap 27, the running order had Flach, Ronca, Johnson and DeLorenzo n the top four. But that yellow also negated Flach’s straightaway lead over Ronca.

DeLorenzo, who had started 14th, was sitting in his favorite spot – on the outside – for the restart, and bobbed and weaved his way into third on the restart, then moved around Ronca for second to complete lap 28.

DeLorenzo had been following in Flach’s tire tracks on the restart, but then moved back down, hoping to find more traction. When that didn’t work, he went back to the top, but Flach was running a flawless line and easily outran DeLorenzo to the finish.

“I knew if I got a good restart, I had a chance,” said Flach. “I knew I just had to hit my marks, But Matt probably has the fastest car here right now, and I knew he was going to be tough.”

DeLorenzo also went home with a $200 bonus for winning the Four States Enterprises Dash for Cash, after putting on a heck of a show with Johnson in the four-lap shootout.

Ron Proctor, who celebrated his 69th birthday on Thursday, recorded his first win at Malta since 2011 in the 25-lap Northeast Paving and Sealcoat Sportsman feature. The victory was worth $1,000, through additional sponsorship from Emerick Associates.

Michael Wagner Fitzgerald started on the pole, and in no time, he and Proctor, who started fourth, separated themselves from the rest of the pack. With the only yellow coming out on lap eight, Proctor and Wagner Fitzgerald ran side-by-side for the majority of the feature, with Proctor finally getting the lead coming out of the fourth turn on lap 19.

Then it was just a matter of holding his line for the veteran, whose last victory at Malta came on the asphalt in 2011. Twelve-year-old Brock Pinkerous nosed out Wagner Fitzgerald for the runner-up position, while high point man Tim Hartman Jr. finished fourth, and Zach Buff was fifth.

Chad Jeseo got to the track late because of traffic problems and didn’t get a lot of prep time, but it didn’t matter, as he drove to his third straight win in the 25-lap Eastwood Detailing Pro Stock feature. That feature also paid $1,000 to win, through additional sponsorship from Crane Outdoor Power Equipment. Jeseo was followed by Shane Henderson, Kim Duell, Scott Towslee and Rob Yetman.

Mike Parodi made a late charge to come away with his first win of the season in the 20-lap Haun Welding Limited Sportsman feature. That was win was worth $1,000, courtesy of Gary and Patricia Van Alstyne.

Parodi, who started 11th, wasn’t a factor until Kevin Ames brought a caution with two laps to go. Knowing he only had one shot, Parodi dove under the second-place car driven by Dan Seguin on the restart to move into second, and then took the led away from John Santolin after Santolin kissed the wall coming out of the fourth turn on the white flag lap.

The Lake Auto Parts Street Stocks ran a 20-lap feature, with Jimmy Duncan picking up the win for the second week in a row. Gary Brust was setting the pace until Duncan used a restart to get the lead on lap nine. Josh Samrov’s late bid fell short, as he settled for second, ahead of Brust, Jasan Samrov and Al Relyea.

The Bear Ridge DMA USAC midgets were also on Friday night’s card, with Will Hull starting on the outside pole and getting the win. But he had his hands full with Seth Carlson, who moved into second on a restart on lap six. Carlson, running the top, reeled Hull in and grabbed the lead coming out of the fourth turn to complete lap 19 in the 25-lap feature. But after one side-side-lap, Hull was back in front to complete lap 21, and that’s where he stayed, beating Carlson to the finish line by 0.666 seconds.