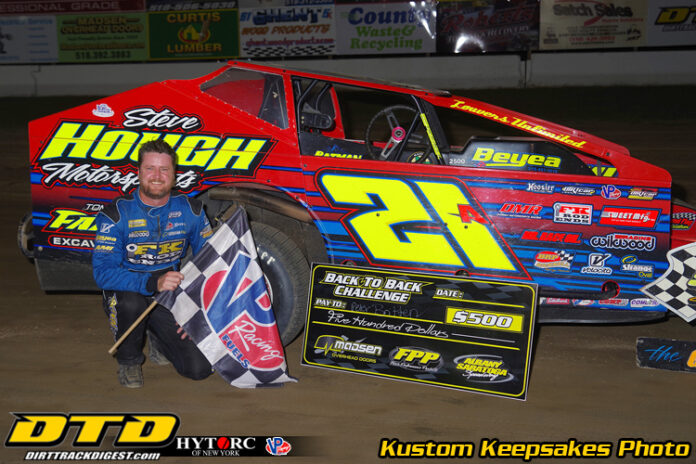 MALTA, NY – If network television can have summer reruns, so can a dirt track.

Albany-Saratoga Speedway’s modified feature Friday night could have been titled, “Batman, The Sequel.”

After winning a mid-race battle with Don Ronca and Jeremy Pitts, Peter “Batman” Britten went on to pick up his second straight victory in Friday night’s 35-lap NAPA Modifieds feature.

With sponsors Big Al’s Sealcoating and Louvers Unlimited boosting the winner’s share of the modified purse to $3,500, and adding in the Madsen Overhead Doors/Flach Performance Products Back-to-Back Bonus, Britten took home $4,000 after recording his third win of the season.

“It’s funny to think we were struggling three weeks ago, and now this,” said Britten after the win. “It’s good to get things turned around and run well again.”

Britten, who started 13th, wasn’t even a factor in the first half of the race, which saw outside polesitter CG Morey set a torrid pace. But Morey was missing a whale of a battle between Ronca, Jack Speshock and Pitts. Speshock, who started fifth, took over the No. 2 position on lap three, but then lost it to Ronca after a restart on lap eight.

Two laps later, Pitts went by Ronca as they completed lap 10, but Ronca wasn’t done yet. Hugging the bottom, he regained the runner-up spot on lap 13, and then rocketed by Morey to take the lead on lap 17.

Britten didn’t enter the picture until lap 24, when he began to pressure Pitts for second. That duo was also gaining ground on Ronca, who had switched to the outside, and on lap 27, they went into the third turn three-wide, with Britten emerging with the lead.

Britten then began to pull away, and suddenly, Ronca and Pitts now had their hands full with Ken Tremont Jr. The 13-time champion swung to the high side coming out of the fourth turn on lap 30 to take over the No. 2 position, but that’s as far as he got, as Britten had a comfortable two-second lead when Rich Petersen waved the checkered flag.

“I didn’t even know we were racing for the lead,” Tremont admitted after the race.

Pitts crossed the finish line third, his best finish of the season, while Speshock was fourth and Ronca finished fifth.

“We just fine-tuned a little bit from last week,” said Britten. “The package we have now is working good. But you can’t stay stagnant racing against these guys.”

Tommy D’Angelo chalked up the first Northeast Paving & Sealcoating Sportsman win of his career in the 25-lap Mark Hughes Memorial. But he needed some racing luck to get the win.

D’Angelo, who began the season in the limited sportsman division, was the early leader but couldn’t hold off Pat Jones, who moved into the top spot on lap 17.

But the next time around, Mike Coffey Jr. brought out the yellow, and on the restart, something broke in Jones’ car, putting D’Angelo back out front, and that’s where he stayed.

“When I saw Pat go by, I thought I’d have to be content with second,” D’Angelo said. “Then something broke on the restart. I’m surprised that even happened.”

Chucky Dumblewski made a last-lap pass to win the 25-lap Eastwood Detailing Pro Stock feature, which paid $1,000 to win through sponsorship from Classic Muscle Parts.

This one was a good one, featuring multiple cautions, flaring tempers, and what looked like another outstanding performance by Luke Horning. Horning, who had won the Four States Enterprises Dash for Cash $200 bonus earlier in the night, was never far from the lead, after starting eighth, and finally grabbed the top spot after a restart on lap 15.

Dumblewski, who had started ninth, had worked his way up to second by lap 21, when Kim Duell brought out a caution, putting Horning and Dumblewski side-by-side. Horning chose the inside and got a big jump, retaining the lead.

But with two to go, Chad Jeseo and Scott Towslee hooked together in the fourth turn, bringing out another yellow, and this time, Dumblewski made Horning pay. Dumblewski got a big run out of the second turn on the final lap, pulled even with Horning coming out of four and pushed his nose across the finish line first, beating Horning by 0.157 seconds.

Rob Yetman was a distant third, followed by Jason Casey and Shane Henderson.

Following last weekend’s rainout, the Haun Welding Limited Sportsman ran a pair of features, with Ashton Pierson winning the first one and Chris Crane Jr. holding off Taylor Wason to in the second.

The first feature picked up on lap five, as four had been completed when the rains fell last week. Pierson, the son of modified driver Adam Pierson, returned to his No. 1 spot and that’s where he stayed to record his first career win and earn $1,000, with the extra money courtesy of Gary and Patricia Van Alstyne. Anthony Mason finished second, with Mike Parodi third.

In the second feature, Crane Jr. came from his 13th starting position to notch his second win of the season. It looked like Crane Jr. would have to settle for second until a caution came out on lap 16. Crane then got his nose in front of his buddy Wason to complete lap 19 and beat Wason to the finish line by 0.275 seconds. Mike Arnold crossed the finish line third.

“I think I might have been able to run him down, but I was hoping for a caution,” said Crane Jr. in victory lane. “Taylor was running the top and it’s always tough to beat him when he’s running up there.”

The 15-lap Lake Auto Parts Street Stock feature hadn’t even completed a lap when the red flag came out for an incident in the fourth turn, in which Al Relyea wound up upside down. But when it was over, Nick Napoli was standing in victory lane after the first win of his career. Napoli started on the pole, but lost the lead to Matt Mosher on lap eight. But Napoli never stopped fighting, and got his nose in front of Mosher at the finish line in the closest finish of the night, a margin of 0.074 seconds. Josh Samrov was a close third, as the top three were as close as rush hour traffic on the Cross Bronx Expressway.

The rash of close finishes didn’t carry over to the 15-lap four-cylinder series feature, however, as Jon Sheppard crushed the competition to record his fourth win of the season. Daniel Joubert finished fifth overall and had the first single-cam car across the finish line.