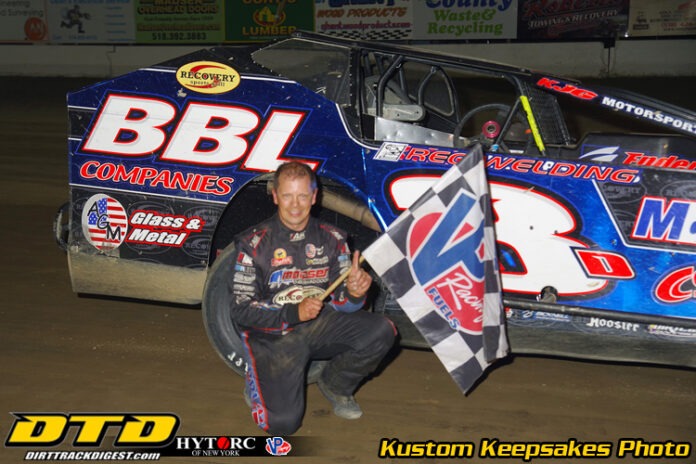 MALTA, NY – Matt DeLorenzo overcame a huge traffic problem and then waltzed to his third win of the season Friday night in the 35-lap NAPA Modifieds feature at Albany-Saratoga Speedway.

The traffic DeLorenzo ran into didn’t happen on the track. It occurred earlier in the day, on the New Jersey Turnpike.

“I was at my daughter’s softball tournament and drove eight hours from Maryland to get here,” he said after the win. “I came here to win. I wasn’t going to give up.”

Despite starting 12th, DeLorenzo worked his way into the top five through the first 10 laps, which were all green. The first caution came out on lap 11, when Jeremy Pitts and Matt Depew got locked up, shock tower to rear bumper, coming down the backstretch.

On the subsequent restart, DeLorenzo ducked inside of Mike Mahaney in the second turn to take over third, and Rich Ronca then drove around front-row starter C.G. Morey, who had led the first 10 laps, to grab the lead.

But Ronca’s reign at the front was a short one. With Ronca and Demetrios Drellos running the top, DeLorenzo had the bottom all to himself and rocketed by Ronca for the lead to complete lap 14.

The field quickly stretched out, single-file, and DeLorenzo built up almost a full straightaway lead after the only caution on lap 11. That left Ronca and Mike Mahaney to battle for second. Mahaney finally won that skirmish when he worked his way under Ronca in traffic (of the usual kind) on the final lap.

Mangino Chevrolet, Buick and GMC was the night’s sponsor and put up $500 bonuses to the winners in all of the divisions (the four-cylinder winners each received $250), so DeLorenzo picked up an extra $500 for the victory.

“I didn’t even know who was in second,” DeLorenzo admitted after the win. “When I caught the lapped cars, I really didn’t want to go to the outside because the last time I did that, I buzzed the tires off. But tonight, the outside was OK and the lapped cars were staying on the bottom, so I had enough speed to get by the lappers.”

The Northeast Paving and Sealcoat Sportsman ran the third leg of the John Ray & Sons/Dean’s Electrical Sportsman Shootout Series, and Pat Jones got his second win of the series and third of the year in the 25-lap feature to earn a total of $2,000. But the results were unofficial pending further tech inspection.

Jones, who started fifth, was second after 10 laps and got under Drew Cormie in the second turn to take over the lead on lap 11.

Cody Ochs, who started ninth, had worked his way to the front and moved in for the kill when Jones got into lapped traffic with five laps to go. But just when it looked like Ochs had the momentum to make a pass for the lead, Cormie brought out the caution when he fell off the pace, and Jones held the lead the rest of the way.

Chris Jakubiak, in his first full season in the NPC Sportsman after moving up from limited sportsman last season, finished second, his best finish in the regular division, while Andrew Buff, Ochs and Jim Osgood completed the top five.

The race was marred by a hard crash involving Rich Crane and Kim Duell with two laps to go. Battling for position coming down the front stretch, Crane and Duell didn’t give an inch heading into the first turn, and Crane slammed into the implement tires guarding the end of the concrete battier, climbed the barrier and then rolled over onto his roof.

Although the car was heavily damaged, Crane wasn’t injured in the wreck.

Shane Henderson finished second, his best finish of the season. He was followed by Jason Meltz, Scott Towslee and Chucky Dumblewski.

Craig Wholey drove to his second win of the year in the 20-lap Haun Welding Limited Sportsman feature. After starting eighth, Wholey was up to second after just six laps, and then used a restart on lap 11 to snatch the lead away from Alex Palmer-Swayer, who had started on the pole.

Mike Parodi made a late charge, but had to settle for second, more than three seconds behind Wholy. Mike Arnold, Chris Crane Jr. and Dylan Grogan completed the top five.

The Lake Auto Parts Street Stocks ran a pair of 15-lap features, with the first being a makeup from a July 1 rainout. Jason Samrov picked up the win in the first feature, and John Filaecki was first under starter Rich Peterson’s checkered flag in the nightcap.

Samrov used a second-row starting position to lead flag-to-flag in the first feature, holding off Al Relyea. The only real problem Samrov encountered was in victory lane, where the right front tire of his car went flat.

Dan Madigan looked like he was going to end a long victory drought in the second feature, starting from the pole and leading the first 10 laps, but Filarecki got the lead for good coming out of the second turn on lap 11 and held off a late bid from Relyea, who again finished second.