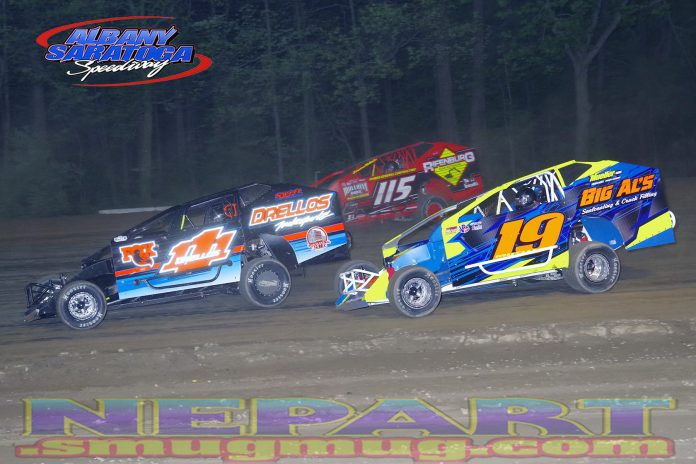 MALTA, NY – If there’s one thing predictable about Albany-Saratoga Speedway, it’s that the modified division is unpredictable.

Just when it looked like Jack Lehner was going to pick up his first win of the season Friday night, things changed quickly, and when it was all over, Demetrios Drellos had his first victory of the year in the 35-lap NAPA Modifieds feature.

“This is the most fun I’ve had racing in my entire career,” said Drellos after notching the fourth win of his career at the historic Malta track. “It’s unbelievable.”

Because of some engine problems earlier in the month, Drellos started eighth, the closest he’s started to the front in a long time, but was never really in contention until late in the feature.

Rich Ronca, who started third, only needed four laps to get to the front, and Keith Flach, who started right behind Ronca, took over the No. 2 spot on lap nine and set out after the leader.

With Ronca setting a torrid pace, Flach soon had his hands full with Lehner, who had started eighth, and the racing up front was intense.

Flach and Lenher were running side by side, with Ronca just a couple of car lengths ahead, but on lap 18, Flach got too high in the second turn, had to check up, and dropped back to fifth.

That’s when Drellos started to make his presence felt. Ronca still had the point and Lehner was second, but Drellos and Adam Pierson were now stalking Lehner.

Ronca had momentum going on the top, but Lehner was flying on the inside, and squeezed under Ronca and came away with the lead to complete lap 23.

But Lehner was running into lapped traffic, and that proved to be his downfall. On lap 24, Lehner closed quickly on the lapped car driven by Brandon Daley and when Daley drifted wide in the fourth turn, Lehner drove into Daley’s right rear, which resulted in Lehner getting a flat left front tire.

That incident brought out the only caution of the race, but because everyone kept moving, Lehner still had the lead, with Ronca second and Drellos third.

Followjng the restart, Drellos stuck his nose in the middle of the leaders, looking for room to squeeze through, and he did it again. the next time around.

Finding no room to make that move, Drellos then pulled a slide job on Ronca to take over the No, 2 position on lap 30. And three laps later, Drellos swung by Lehner, who was struggling to keep his car tucked to the inside, coming out of the fourth turn to take the lead.

Lehner hung on for second, flat tire and all, and was followed by Pierson, Marc Johnson and Ronca.

“I really found a lot of speed in the middle of the track,” said Drellos. “I got lucky. They gave me a lane that freed me to make some moves and I was able to break the momentum of the 1 car (Ronca).”

“I thought I had the best car tonight,” said Lehner. “I almost hung on, even with a flat tire. Daley cost me this one.”

The Lucas Oil Empire Super Sprints made their second appearance of the season at Albany-Saratoga, and for a long time, it looked like Danny Varin was going to come away with the win in the 25-lap feature. Varin started on the pole and set the pace for the first 19 laps, but on lap 20, Jordan Poirier, who had started sixth, pulled a slide job on Varin coming out of the fourth turn and moved into the lead.

Varin then tried a slide job of his own, but Poirier maintained his advantage and easily beat Varin to the finish line. Davey Franek, Shawn Donath and Dylan Swiernik completed the top five.

Chad Miller won the $100 bonus in the ESS Dash for Cash, which was sponsored by J&D Waste Equipment.

Jeff Washburn picked up his first win of the season in the 25-lap Northeast Paving & Sealcoating Sportsman feature, which paid $1,000 through sponsorship by Saratoga Masonry Supply.

Washburn, a former competitor in the pro stock division at Malta, started eighth and didn’t get the lead until lap 19, but he finished with a comfortable margin over Darryl Nutting, who charged to the front after starting 22nd, and Zach Buff. Tyler Rapp, who finished ninth, also won the Four States Enterprises Dash for Dash, picking up a $200 bonus.

Chucky Dumblewski walked off with $1,000 top prize for winning the 25-lap Eastwood Detailing Pro Stock feature, with the extra money being put up by A-Z Landscaping.

The pro stock feature was marred by a number of cautions, and at different times, the yellows sent points leader Chad Jeseo and Luke Horning to the rear of the field.

Rich Crane, who was driving his brother’s car after wrecking his own car the week before, started fourth, got the lead after three laps, and was far enough in front to avoid all the carnage that was taking place behind him.

But he also couldn’t watch Dumblewski, who had started 11th. Dumblewski took over the No. 2 spot on lap 17 and two laps later, Jeseo and Jordan Modiano brought out the caution when they tangled between the first and second turns.

On lap 21, Dumblewski and Horning, who were running second and third, went high and low to get around Crane, but before the lap was completed, Jay Casey and Jaxson Ryan brought out another yellow, keeping Crane on the point.

But Dumblewski wasn’t done yet, and went high coming out of the fourth turn on lap 22 to get the lead for good, coming away with his third win of the year. Shane Henderson caught Crane at the wire for second, while Horning was fourth and Rob Yetman finished fifth.

Dakota Green drove to his first career win in the 20-lap Haun Welding Limited Sportsman feature. Green started on the pole and led all 20 laps, with lightning lighting the sky around the speedway. Dan Seguin made a late charge, but had to settle for second, 0.393 seconds behind Green. Mike Arnold finished third, and current points leader Chris Crane Jr. was fourth.

Dan Madigan ended a 15-year winless drought with a victory in the 20-lap Lake Auto Parts street stock feature. Madigan, whose last win at Albany-Saratoga came during the 2007 season, when he was running pro stocks, started on the pole and built up a straightaway lead before Josh Samrov brought out a yellow on lap 18, when he suffered a flat tire.

But Madigan hit his mark on the restart perfectly, and beat Jason Samrov and Matt Mosher to the finish line.