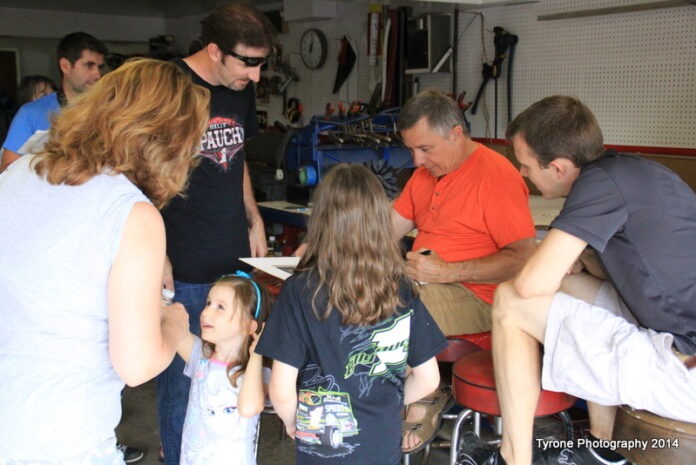 This Friday, August 5—as part of John Grady Nostalgia Night, mounted in memory of the track’s longtime photographer—Hall of Fame driver Billy Pauch from Frenchtown, NJ, will be returning to Albany-Saratoga Speedway to greet fans, sign copies of his new book, and relive some great times in his career.

He cemented his status the first time he laid eyes on the place.

In 1977, his rookie Modified season, Pauch did venture out to New York, attempting to qualify for a couple of DIRT races at Lebanon Valley and Weedsport, as well as the biggie at Syracuse. “We went up there and got our ass kicked,” he remembered.

Nonetheless, two years later, Billy decided to drag his own Ebersole Gremlin across state lines to take a shot at C.J. Richards’ Super Shootout at Albany.

“We were going pretty good at home, winning races. When you’re going good it gives you the incentive to go to other places and try to win,” he figured.

So Billy, his dad Roy, girlfriend Barbara and buddies Dave Zyck and Bobby Fandel loaded up the car and headed upstate.

Pauch was undeterred. “We drove to the front. I remember I was sticking the bottom real good, and I came up through on the bottom. It wasn’t a top deal—like at Fulton, I’d always run around the top. But there, I ran the bottom.”

On lap 22, Billy stole the lead from Jack Johnson (who would go on to win the first of his three A-S titles later that year). After a brief back-and-forth with fellow invader John Kozak with 25 to go, he retook the lead for good on a lap 58 restart—startling the Capital District crowd in a shocker that’s still talked about.

“I passed Johnny Kozak to get the lead…and that was a good car! That was Eugene Mills’ 30; he was winning a lot of races in Delaware with that car,” Pauch pointed out. “It was the first time I saw the track! There were only one or two times I went to a first-time track I’d never seen and won. I did that at Bridgeport, and I did it at Albany.”

That $3,000 winner’s share seemed like a small fortune to Pauch. “I remember how much it paid—it was a big stack of money! All fives and tens and twenties, and Barbara had to count it all out.

“Then going home, I let Dave Zyck drive and we’re coming down the Thruway and instead of getting off at our exit, he missed it. I guess he took the Thruway right down into New York City. I woke up and saw we were going by Yankee Stadium,” Billy recalled. “We didn’t get home until like eight in the morning.”

Pauch will revisit past times at Albany-Saratoga—including his one-year stint as a regular there in 1981—when he returns to the track on August 5. From 5-7pm, he will meet fans and sign copies of the recently released biography, “The Last Cowboy: The Life and Times of Billy Pauch,” as part of the planned Nostalgia Night festivities.

For those unable to attend the event, the popular book can be purchased online at billypauchbook.com.