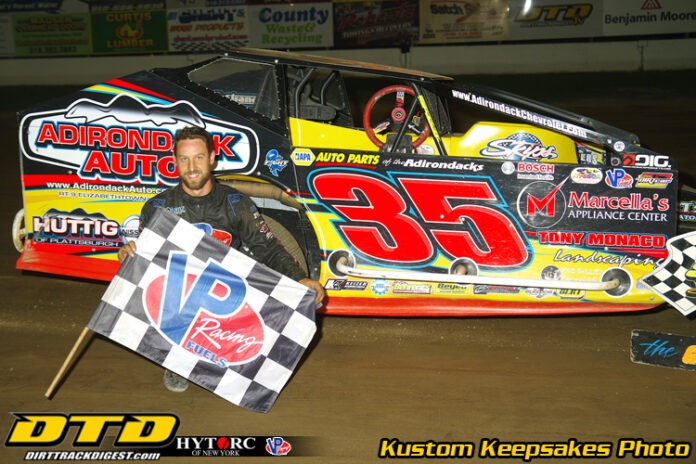 MALTA, NY – Mike Mahaney parlayed a good starting position and an incredibly fast race car into his third win of the season Friday night in the 35-lap NAPA Modifieds feature at Albany-Saratoga Speedway.

Mahaney, who had just one win when he won the modified point championship in 2020, started eighth Friday night, went to the low side and moved past Scott Huber to take the lead on lap 16 and then easily pulled away to put the George Huttig-owned modified into victory lane and take home the winner’s payday of $3,000.

“This is unbelievable,” said Mahaney in victory lane. “We’ve been struggling for the last three weeks or so. The guys have been working really hard, and I wanted to get this one for them.”

Mahaney was firing on all cylinders from the drop of Rich Peterson’s green flag. He only needed seven laps to get by James Meehan for second and quickly reeled in Huber, who had started on the outside pole in his Hunt’s XLS7-powered modified.

Once Mahaney took over the top spot, there was no catching him. The only caution of the feature came out on lap 27, when Jeremy Pitts rolled to a stop in turn three. When racing resumed, Mahaney left Huber to battle with Peter Britten for second.

The restart on lap 28 allowed Britten to take over the No. 2 spot, but Huber kept digging, and went back around Britten on lap 29.

Matt DeLorenzo, who went into the night with a 59-point lead over Britten in the battle for the modified championship, finished eighth after starting 14th.

“Definitely, I think it helped us starting eighth,” said Mahaney. “But the car was also better than it’s been for the last month of so. The stopwatch doesn’t lie. Lyle (track promoter Lyle DeVore) put a lot of moisture in the track tonight and the cushion was awesome.”

“It was tough on the bottom,” said Huber. “I moved up the last six laps or so and it was better there, but Mahaney was better overall tonight.”

Chris Jakubiak posted the first win of his career in the 25-lap Northeast Paving & Sealcoating Sportsman feature, which paid $1,000 to win through sponsorship by Emerick Associates.

Jakubiak, who started ninth, wasn’t really a factor in the race until he joined a four-car battle for second, behind leader Travis Billington, after a caution on lap 18.

Jakubiak, Jeff Washburn, Chris Johnson and Andrew Buff was running inches apart before Dylan Madsen brought out the final yellow of the race on lap 22. Jakubiak, who won four limited sportsman features in 2021 before moving up to the regular sportsman division, used that final restart to get the lead coming out of the fourth turn and outran Billington to the finish line. Billington had the best finish of his young career, and also picked up a $200 bonus for winning the Four States Enterprises Dash for Cash.

“The restarts really helped me out at the end,” said Jakubiak. “On the last restart, I figured I’d go to the high side and either blow it, or not. I guess I made the right choice.”

Luke Horning recorded his second win of the season in the 25-lap Eastwood Detailing Pro Stock feature, which also paid $1,000 to win, through sponsorship by Crane’s Outdoor Power Equipment. Horning started seventh and came out on top of a tough battle with Rich Crane. Jason Casey finished third and regained the point lead from Chad Jeseo, who finished sixth.

Phil Arnold outdueled Taylor Wason to record his first career win in the 20-lap Haun Welding Limited Sportsman feature. That win also was worth $1,000, through sponsorship by Cordova Plumbing.

Arnold started on the outside pole and needed eight laps to get by early leader Wesley Sutliff. A rash of yellow flags forced track officials to institute single-file restarts midway through the feature, which allowed Arnold to keep Wason behind him. Wason made a big run at Arnold on the final lap, pulling even with the leader going down the backstretch for the final time, but Arnold hit the finish line with a half-a-car length advantage.

There was also a first-time winner in the 15-lap Lake Auto Parts Street Stock feature, as Mike Bussino nipped Dan Madigan by .0227 seconds.

When outside pole sitter Cordell Younger was involved in a three-car incident on the first lap, Bussino moved up to the front row for the restart, and went right to the front. Madigan, who started fifth, took over the No. 2 spot on lap three and got a shot at Bussino when point leader Jeff Meltz brought out the final caution on lap 13 with a flat tire.

But Bussino was up to that final challenge, and held off Madigan for his first win of the season. Jason Samrov finished third, just ahead of his brother Josh, and Nick Napoli completed the top five.

The Bear Ridge DMA USAC Midgets were also on Friday night’s card, with Josh Sunn winning the 20-lap feature. Sunn used to be a regular at both Albany-Saratoga and Devil’s Bowl when they both ran under the Champlain Valley Racing Association banner and he was a multi-time winner at the Bowl, but Friday marked his first career win at Albany-Saratoga.

“I love this place,” he said in victory lane after his win. “I really hate not coming here on Friday nights.”