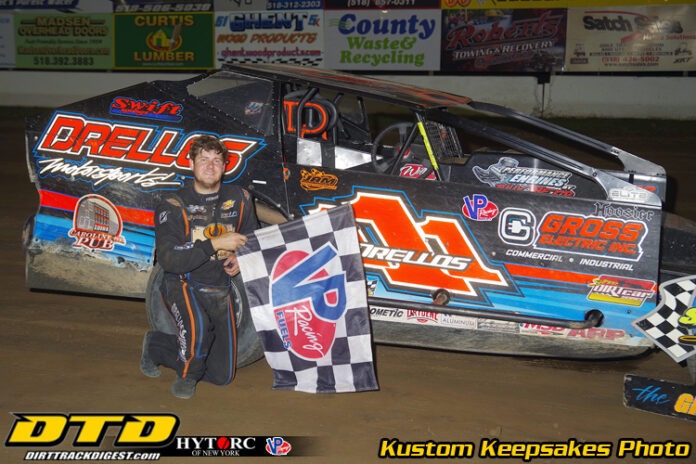 MALTA, NY – Demetrios Drellos erased the frustration of two weeks of engine problems by recording his third win of the season in the 35-lap NAPA Modifieds feature Friday night at Albany-Saratoga Speedway.

Because of two consecutive weeks of loading up early and not even running in the feature, Drellos parlayed a third-row starting position and one restart into a victory worth $3,000.

But don’t think those engine problems weren’t haunting him once he got the lead Friday night.

“Oh, it definitely does,” said Drellos after the win when asked if the previous problems were on his mind after getting the lead. “You don’t know if it’s going to happen again.

“Most of the things that happened were parts failures,” he added. “I have a great engine builder (Performance Engines by Billy the Kid) and what happened was no fault of his. We just had unfortunate, unlucky problems.”

The only restart of the 35-lap feature turned out to be the turning point. Don Ronca started on the outside pole, took the lead away from polesitter CG Morey on lap two, and instantly went to the top. With a lot of moisture in the track after an early afternoon rainstorm, Ronca was humming along and opened up a huge lead over Brian Calabrese and Keith Flach.

On the restart, Ronca picked the outside, and as he and Calabrese went into the first turn, they touched wheels, sending Ronca very wide and opening up a hole for Drellos, who had started fourth on the restart.

Drellos shot by Ronca to take over second and quicky gained ground on Calabrese, who came out of the incident with the lead. On lap 26, Drellos rocketed under Calabrese in the third turn, slid up and made contact with Calabrese in turn four and hit the start-finish line with the lead.

“It wasn’t intentional,” said Drellos of his contact with Calabrese. “I didn’t know if I should stay on the top or the bottom, and he was running in the middle, in no-man’s land. I did what I had to do to get by him. I’m not here to make enemies. I’m here to win races.”

Flach made a late run and used lapped traffic to pull within a couple of car lengths of the leader, but he had to settle for second.

“Keith ran a good race,” said Drellos. “That was fun. The lapped cars were a little picky, but that’s what they had to do.”

Flach also picked up a $200 bonus for winning the Four States Enterprises Dash for Cash.

Jack Lehner crossed the finish line third, ahead of Marc Johnson and Calabrese. Matt DeLorenzo finished ninth and unofficially locked up his first modified championship at the Great Race Place.

Tim Hartman Jr., who had clinched his fourth sportsman championship last week, chalked up his third win of the season in the 25-lap Northeast Paving and Sealcoat feature on Friday night, despite starting 19th.

The feature turned into a heartbreaker for David Baranowski Jr. After starting fourth, he had the lead on lap four and at times, appeared to be on his way to his first win of the season.

But each time he seemed to get comfortable, another caution flag flew. He was perfect on his restarts, but each time, Hartman was able to pick off more cars.

When Cody Ochs and Chris Jakubiak brought out the sixth caution on lap 20, Hartman was up to third, and then went to the outside groove on lap 22 to take the No. 2 spot away from Mike Coffey Jr., who was also looking for his first win of the year.

One lap later, Hartman Jr. put the Mike Parillo-owned car into the lead, and came away with his 35th career victory, which also tops the all-time sportsman win list.

“I made a tire choice right before the feature,” said Hartman Jr. in victory lane. “I guess it was the right one.”

Baranowski Jr. was second, his best run of the season. He was followed by Chris Johnson, Coffey Jr. and Zach Buff. Hartman Jr. took home a $1,000 payday through sponsorship from Electric City Taxi.

It was a good night for the Crane family, as Rich Crane notched his first win of the season in the 25-lap Eastwood Detailing Pro Stock feature, and his nephew Chris Crane Jr. took another step toward his first Haun Welding Limited Sportsman championship with his third win of the year in the 20-lap feature in that division.

The pro stock feature, which was the second-to-last race on the card, was delayed for 15 minutes after a brief shower, and got off to an inauspicious start because of the slippery conditions. A red flag came out on lap two when five cars, which included points leader Jason Casey, stacked up between the third and fourth turns, with Luke Horning’s car winding up with the front end draped over the concrete barrier.

Crane, who started on the outside pole, then pulled away from the rest of the field, as the remainder of the feature was run under green flag conditions. Crane took home $1,000, through sponsorship from Benson’s Pet Centers.

Scott Towslee made a late run and finished second, just 0.776 seconds behind Crane, while Chad Jeseo made up a lot of ground in the battle for the track championship with a third-place finish.

The tightest finish of the night came in the 15-lap Lake Auto Parts Street Stock feature, as Dan Madigan beat Al Relyea to the finish line in a photo finish. Computer scoring had Madigan picking up his second win of the year by a margin of .004 seconds.

Relyea, who started seventh, took the lead away from Matt Mosher on lap five, but Madigan, who started ninth, ducked under Mosher to take over second on lap. Relyea’s lead was wiped out when Gary Brust spun out on lap 11, and Madigan got the big break he needed when John Hemming brought out another yellow with one lap to go. Relyea and Madigan ran side by side as the green and the white flag flew at the same time, and were inches apart when they crossed the finish line.

“I was worried that Al’s transponder was farther ahead on his car and he was going to get the win,” said Madigan in victory lane.

Elmer Montville, who switched cars with his cousin Adam to get a win last week, climbed back behind the wheel of his own car and dominated the 15-lap four-cylinder feature, getting his second consecutive victory, finishing over three seconds ahead of his cousin and David Frame, who was third. John Mason was fourth overall and was the first single-came car across the finish line.