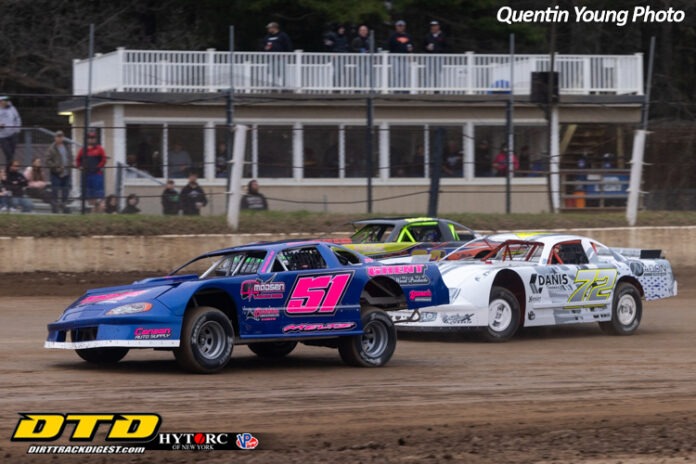 MALTA, NY – Meltz Lumber, one of the many loyal corporate sponsors at Albany-Saratoga Speedway, has increased the purses for two of the full-fendered divisions that will be competing at Malta Massive Weekend, presented by NAPA, on Sept. 23-24.

Meltz Lumber has also added $500 to the purse for the DIRTcar Pro Stock Series race on Saturday, Sept. 24. The winner of that feature will now receive $1,500.

Meltz Lumber, located in Mellenville, N.Y., is a fourth-generation company started in 1946 which produces over four million board feet of lumber every year, and is a longtime supporter of racing at Albany-Saratoga Speedway.

The Meltz family came away with two victories during the 2021 Malta Massive Weekend. Jeff Meltz Sr., the 2020 and 2021 street stock champion at the historic Malta track, won the street stock feature on Day 1, and his son, Jason, won the DIRTcar Pro Stock Series race on Day 2.

Jason Meltz was involved in a wild finish in last year’s pro stock feature. He and Luke Horning were side-by-side as they took the white flag. Coming through the fourth turn for the final time, they made heavy contact, with Horning spinning out in front of the field, while Meltz charged to the finish line. Horning slid down the track into the path of Jay Casey, who slammed into the rear of Horning’s car, went into a violent flip and wound up on his wheels in front of the billboards on the frontstretch.

After DIRTcar officials ruled the incident was a racing accident, Meltz got the win, his third of the season,

Malta Massive Weekend, presented by NAPA, will begin on Friday, Sept. 23, highlighted by a 40-lap feature for big block and Malta-legal small block modifieds, which will pay $4,000 to win. The Sept. 23 card will also include the 40-lap Fall Sportsman Championship, which will pay $2,000 to win, through sponsorship from Glen Ridge Motorsports Park.

The main attraction on Saturday, Sept. 24, will be a 100-lap Super DIRT Series race, paying $10,000 to win, and the winner will also receive a guaranteed starting spot in the Billy Whittaker Cars 200 at Oswego Speedway next month.