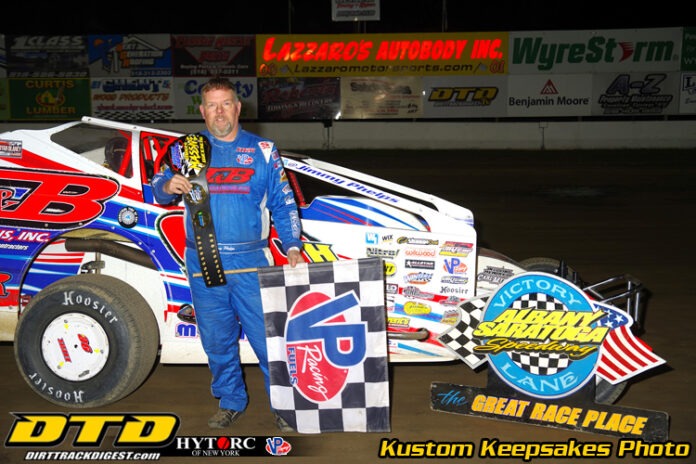 MALTA, NY – It was supposed to be the prelim, but it sure looked like the main event.

The victory was just the second of Phelps’ career at Malta, and was worth $4,000. His first win at the historic Malta track came in 2015, when he won Brett Hearn’s “Big Show 7”.

With Johnson drawing the third starting position and Phelps starting fourth, the two were never far apart, and Johnson took his first lead of the race when he slid past pole-sitter Brian Calabrese in the second turn on lap six on a restart.

Track champion Matt DeLorenzo, who started fifth, used the same restart to move into third, but just three laps, his night was done, as he pulled into the infield. Phelps then took over the runner-up position on lap 10 and began cutting into Johnson’s lead.

Johnson was running the high groove, with Phelps on the inside, and Phelps was getting an awfully good run through turns 1 and 2. But as soon as Johnson saw the nose of Phelps’ car on lap 19, he turned up the wick, and went back out to a four-car length lead.

But Phelps was not done, and on lap 30, the two were side-by-side as they passed the flagstand. Phelps then got a good run down the inside going down the backstretch and grabbed the lead on lap 31, but just as quickly, he and Johnson changed lanes, and Johnson got his nose in front to lead lap 32.

Rich Ronca blew his motor on lap 36, leaving a trail of oil around the track, and the race was red-flagged while the track crew spread a drying agent on the oil spill. Phelps timed the restart perfectly, charging out front and leaving Johnson to battle with Stewart Friesen for second. Friesen, who had started eighth, was rim-riding for the last two laps and caught Johnson with one lap to go to finish second. Johnson was followed by Adam Pierson and Anthony Perrego.

“I just wanted to keep it straight, and I guess the tires stayed better than his did,” said Phelps after the win. “I was able to get by him on the bottom, but then like an idiot, I moved back to the top and he got back by me. But that last restart really helped.”

Bart Contracting put up a $200 bonus for each heat race winner. Those bonuses went to Perrego, Jeremy Pitts and Mike Mahaney.

The other highlight of Day 1 of Malta Massive Weekend was the 40-lap DIRTcar Fall Championship Series race, which paid $3,000 to win, through sponsorship from Glen Ridge Motorsports Park, Dean’s Electrical Services and Agway True Value of Ballston Spa.

The win went to Quebec driver Cedric Gauvreau, who was making his first appearance ever at Albany-Saratoga.

Pat Jones, a three-time winner at Albany-Saratoga during the 2022 season, returned after a month-long layoff and drew the pole. He then set the pace for the first 29 laps., continually holding off Travis Witbeck and invader Mike Fowler.

But Gauvreau, who had started seventh, eventually moved into third and then used a restart to get the jump on Jones, clearing the leader coming out of the second turn and taking the lead on lap 30.

Witbeck also got past Jones on lap 32, and finished second. Jones hung on for third, with Chad
Edwards fourth and Fowler fifth.

Gauvreau said after the race that the victory made the long ride from his home in Chelsea, Quebec worth it.

“It took about five hours,” Gauvreau said after chalking up his sixth overall win of the season. “It was a long drive, but now I have the trophy. Now we’re going to drink a few beers to celebrate.”

The fans at Albany-Saratoga also witnessed a heck of a battle in the 20-lap Lake Auto Parts Street Stock feature, which paid $1,000 to win through sponsorship by Meltz Lumber. But when it was over, the winner wasn’t the winner.

Josh Bussino, who started in the last row in the 20-car field, passed Chris Stalker on the final lap and was the first car under the checkered flag. But promoter Lyle DeVore quickly disqualified Bussino. According to DeVore, Bussino had asked for an opportunity to tack onto the end of the street stock field and just shake down the car in preparation for another race later in the year, knowing that his car didn’t meet Albany-Saratoga standards. So when Bussino pulled up on the front stretch for a post-race celebration, DeVore quickly sent him back to the pits, allowing Stalker, who had led the race since lap two, to celebrate his first win at Malta.

The Roberts Towing four-cylinders were also in action on Day 1 of Malta Massive Weekend, with Damian Ward getting the victory. John Mason was fifth overall and was the first single-cam car across the finish line. Chris Duffney Jr. has been leading the single-cam division, but was involved in an incident in turn four on the final lap, allowing Mason to get the win.