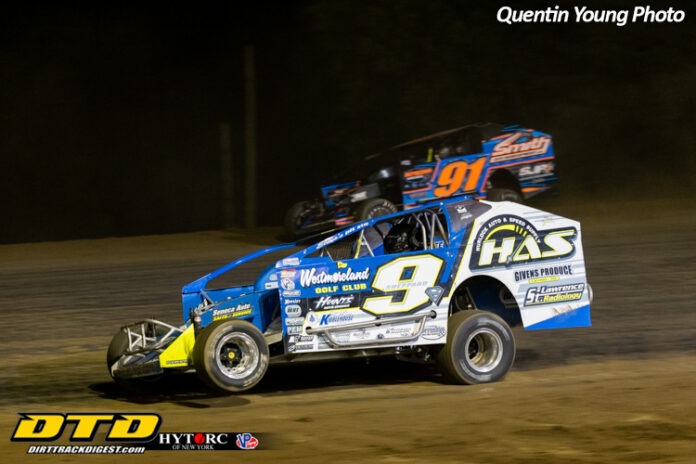 MALTA, NY – Matt Sheppard turned what could have easily been his worst night in a Super DIRTcar Series race this season into a victory celebration on Saturday night at Albany-Saratoga Speedway.

Seemingly mired in the middle of the pack, Sheppard put on a late charge, snatched the lead away from Billy Decker on lap 96 and came away with his sixth SDS victory of the season in the 100-lap feature that put the icing on Malta Massive Weekend.

Sheppard took home the top prize of $10,500, but because he had already earned a guaranteed starting spot in the Billy Whittaker Cars 200 at Oswego next month, Decker received the guaranteed spot.

For most of the night, Sheppard looked like just another regular Joe on the Super DIRTcar Series. He finished fourth in his heat, missing the redraw for the first time this season, and started 15th in the 100-lap feature. He wasn’t a factor for the first 75 laps of the race, but then, Sheppard ducked into the proverbial telephone booth and emerged as Super Matt.

With 25 laps to go, Sheppard was seventh in the field, and with 87 down on the lap counter, he was only up to fourth, while Decker and Anthony Perrego were battling for the lead.

Decker was running the top, burying his car in the corners, while Perrego was holding the Salerno 4 on the inside. As they completed lap 93, the two were side-by-side, and Decker then got a big run coming out of the second turn and grabbed the lead on lap 94.

Sheppard got under Perrego in turn three to take over the No. 2 spot on lap 95, and the next time around, he got under Decker coming out of the fourth turn to move out onto the point for the first time all night. Four laps later, he had his sixth Super DIRTcar Series win of the season.

“I just told my crew, I had no idea I won,” said Sheppard in victory lane. “On the restart, I was 11th, and Adam (Pierson) was leading and I figured he had checked out on us. I didn’t know I was racing Billy for the lead. I’m shocked to win here. It was just a wild night.”

Even though Sheppard got to celebrate under the shower of gold confetti, that distinction should have belonged to Pierson. Pierson, who drew the No. 3 starting spot, went low on polesitter Decker to get the lead on lap two, and that’s where he stayed. With the first 33 laps being run under green-flag conditions, Pierson and Decker were racing in lapped traffic most of the time, and Pierson, the Vermont driver who is in just his second full season on the Super DIRTcar Series, was running a perfect race.

After Stewart Friesen brought out the only caution on lap 34, slowing in the fourth turn and then ducking into the hot pit for a new tire, Decker slid high in the fourth turn on the restart, allowing Perrego, who had started eighth, to take over second.

Pierson was hitting his marks perfectly as he set a torrid pace, leaving Decker and Perrego to battle for second. Once Perrego broke free of Decker, he set his sights on Pierson and used lapped traffic to cut Pierson’s lead to a couple of car lengths by lap 55.

But once he got away from the lapped cars, Pierson was untouchable, and again opened up a big lead.

But on lap 84, just after he passed the starter’s stand, Pierson took a hard right into the pits, giving the lead to Perrego.

“The motor,” said Pierson after he was asked what happened to his car. “It was still running, but it started vibrating and losing power at the same time. I think it might have been a rod bearing, but right now, I don’t know.”

Whatever it was, it dropped Pierson from what would have been his biggest payday ever to a 24th place finish.

Following Sheppard and Decker across the finish line were Perrego, Marc Johnson and Jeremy Pitts.

Sheppard’s win was his first victory at Albany-Saratoga since June 12, 2018, when he won the 61-lap “Tribute,” which was dedicated to the careers of Jack Johnson and C.D. Coville.

Day 2 of Malta Massive Weekend also included a 30-lap Super DIRTcar Pro Stock Series race, and although Rich Crane was in front for a good deal of the time, this race was also full of drama.

Crane, who started third, needed 11 laps before he could wrestle the lead away from polesitter Phil Difiglio, but Nick Stone, who had started fourth, went into the No. 2 spot a half-a-lap later, and began to put pressure on Crane.

Once the first yellow came out on lap 16, caution flags became the norm of the rest of the race. Laps 22, 24, and 26 all saw cautions, and each time Crane was able to get the jump on Stone. Following the restart on lap 26, Stone got a good run on Crane in the fourth turn and nudged the rear end of the leader in the fourth turn on lap 28.

But that little tap allowed Crane get a little breathing room, and he beat Stone to the finish line by 0.455 seconds. Rob Yetman finished third, followed by Jason Casey and Josh Coonradt.

“I knew I had some good guys behind me,” said Crane. “The car was good on restarts and I knew if I could get a good jump and get through one and two, I’d be OK. But I also knew if I slipped up, I was done.”

Crane earned $1,500 for his third win of the year, with $500 of that coming from sponsorship from Meltz Lumber, Crane also picked up a $250 bonus from Bart Contracting, which had been offered if a Malta regular won the race, and Bart Contracting also put up $100 bonuses for heat race winners. Because Crane also won his heat, his total payday was $1,850.

Other heat race bonuses went to Coonradt, Stone and Yetman.

The final checkered flag of the 2022 season at Albany-Saratoga flew over Craig Wholey in the 20-lap Haun Welding Limited Sportsman feature. The win was Wholey’s fourth of the season. Following him across the finish line were Dakota Green, 2022 track champion Chris Crane Jr., invader Roger Hummer and Taylor Wason.