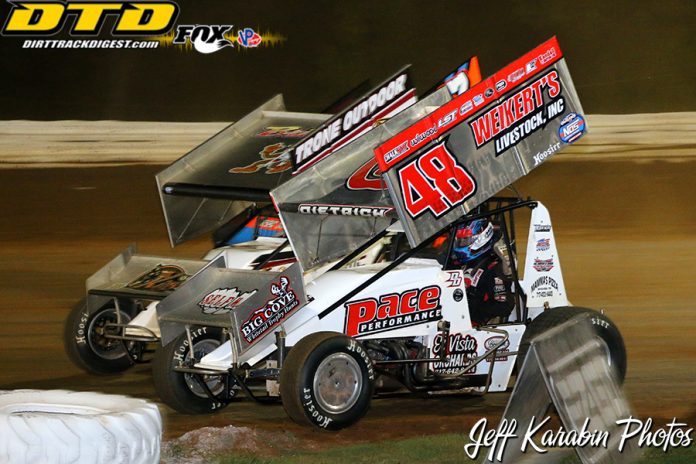 BROWNSBURG, IN – With the 2020 Ollie’s Bargain Outlet All Star Circuit of Champions presented by Mobil 1 championship point season commencing in three days, a stout contingent of some of the nation’s finest open wheel competitors are expected to assemble and tour full-time with America’s Series, kicking things off, officially, with a two-day stay at Park Jefferson International Speedway in Jefferson, South Dakota, on Friday and Saturday, May 29-30.

The doubleheader in the Mount Rushmore State, awarding $6,600-to-win each evening, will ignite an upcoming All Star schedule complete with ten races at nine facilities across five states, eight of those facilities never hosting an All Star Circuit of Champions program. Led by two-time and defending All Star champion and back-to-back Series-leading feature winner, Aaron Reutzel, the Series will trek through not only South Dakota between now and June 14, but also Oklahoma, Kassas, Texas, and Louisiana; an unprecedented 17-day swing during Tony Stewart’s tenure as owner of the All Star Circuit of Champions.

Earning a combined 25 Series victories during the last two seasons, not including two he has amassed during non-point competition earlier this year, Clute, Texas’s Aaron Reutzel is just one of 11 full-time All Stars expected to hit the road in 2020, all chasing the $65,000 championship prize up for grabs at the end of the year.

Aaron Reutzel | Baughman-Reutzel Motorsports No. 87 | Clute, Texas: Two-time and defending All Star Circuit of Champions title earner, Aaron Reutzel, raced for a combined 25 feature victories during his pair of championship seasons and already owns two victories thus far in 2020; one at Volusia Speedway Park and one at East Bay Raceway Park. The Clute, Texas-native highlighted his most recent All Star season with the 52nd Annual Tuscarora 50 score at Port Royal Speedway worth a hefty $52,000.

Cory Eliason | Rudeen Racing No. 26 | Visalia, California: The 2019 All Star Circuit of Champions Rookie of the Year has already secured three podium finishes with the Series this season, all accumulated during non-point action in Florida. Finishing third in his first-ever title chase, the California-native scored a pair of All Star victories in 2019 highlighted with a $10,000 triumph at Virginia Motor Speedway in early April. Eliason ended his first year as an All Star with 30 top-ten finishes in 40 feature starts.

Brock Zearfoss | Brock Zearfoss Racing No. 3Z | Jonestown, Pennsylvania: The ‘Jonestown Jet’ Brock Zearfoss will join the All Stars for a second consecutive season in 2020, ending his rookie campaign fourth in the final standings with a trio of All Star victories to his credit, one of which the $10,000 Brad Doty Classic at Attica Raceway Park. The former Port Royal Speedway track champion and one-time Outlaw winner compiled 22 top-ten finishes in 39 All Star feature starts in 2019.

Paul McMahan | Tom Buch Motorsports No. 13 | Nashville, Tennessee: Nashville, Tennessee’s Paul McMahan will once again bring national experience and competitiveness to the All Star trail, capping his most recent campaign in 2019 with a fifth-place outcome in the championship standings, earning 22 top-ten finishes in the process. McMahan was a two-time All Star winner during the 2018 season, ending his campaign fourth in the title chase.

Greg Wilson | Greg Wilson Racing No. W20 | Benton Ridge, Ohio: Like Paul McMahan, Greg Wilson brings national experience and competitiveness to the All Star Circuit of Champions. The Benton Ridge, Ohio-native and former Outlaw is a two-time All Star champion and has accumulated 25 Series victories over the course of his career, most recently at Fremont Speedway in June of 2015. Wilson capped his 2019 All Star efforts sixth in the title chase on the strength of 19 top-ten finishes.

Skylar Gee | Skylar Gee Racing No. 99 | Leduc, Alberta, Canada: Former American Sprint Car Series (ASCS) full-timer and ASCS National Rookie of the Year, Skylar Gee, will return to the All Star Circuit of Champions with hopes of picking up right where he left off. Gee, the lone Canadian on the All Star driver roster, finished seventh in last year’s end of the year standings and earned one victory along the way. In addition, Gee collected 12 top-ten finishes in 2019 with his victory accomplished at the always-competitive Lincoln Speedway in Abbottstown, Pennsylvania.

Justin Peck | Premier Motorsports No. 70 | Monrovia, Indiana: Although 2020 will mark down as Peck’s first full season with the All Star Circuit of Champions, Peck and Pete Grove’s Premier Motorsports joined forces during the midpoint of 2019 and followed the schedule for the rest of the season, accumulating 12 top-ten finishes in 29 feature starts. Peck’s lone All Star victory was acquired at Macon Speedway in Macon, Illinois, during the 2017 season.

Sam Hafertepe Jr.| Hill’s Racing Team No. 15H | Sunnyvale, Texas: Certainly the most decorated All Star Circuit of Champions Rookie of the Year contender, Hafertepe brings World of Outlaws and ASCS National Tour experience to the Series in 2020, earning three consecutive ASCS national titles during his racing tenure. Although never a full-timer, Hafertepe does own one All Star victory, earning his trip to victory lane during a visit to North Florida in 2008.

Zeb Wise | Sam McGhee Motorsports No. 11 | Angola, Indiana: Zeb Wise will work to transfer his USAC National Midget Series experience to the All Star Circuit of Champions in 2020, competing full-time in an attempt to clinch Rookie of the Year honors. Although an inexperienced All Star driver, Wise’s team, Sam McGhee Motorsports, does own All Star experience and finished second in the 2019 championship standings with Dale Blaney at the wheel. Zeb Wise is the youngest USAC National Midget Series winner on record, capturing the BC39 win at The Dirt Track at Indianapolis Motor Speedway in 2019.

Danny Dietrich | Gary Kauffman Racing No. 48 | Gettysburg, Pennsylvania: The 2019 Central Pennsylvania Sprint Car Series and Williams Grove Speedway champion is now a full-time contender with the All Star Circuit of Champions. Certainly no stranger to All Star action, the Pennsylvania-native owns 11 Series victories, most recently clinching a $10,000 win at Orange County Fair Speedway on July 13, 2019.

Josh Baughman | Baughman-Reutzel Motorsports No. 17 | Odessa, Texas: Joining teammate and two-time All Star champion, Aaron Reutzel, on the road in 2020, Odessa, Texas’ Josh Baughman will follow the All Star schedule in search of victories and a title, ultimately clinching Rookie of the Year honors in the process. Like Gee and Hafertepe, Baughman brings ASCS National Tour experience to the traveling All Stars, earning top-ten finishes in the ASCS national standings in 2016 and 2017.

Online registration is now open for all teams entering action with the All Stars and IRA during the two-day visit to Park Jefferson International Speedway on Friday and Saturday, May 29-30. Registration and pit passes for the two-day program can be filled out and purchased by clicking the link below. Sprint car teams are encouraged to complete the online registration process at their earliest convenience. IRA member teams please contact Steve Sinclair at siraprez@sbcglobal.net before registering.

General admission tickets for each night of the first-ever All Star invasion of Park Jefferson International Speedway are now available for $29. Children 5 and under will be admitted at a discounted price of $5. To comply with the social distancing recommendations upheld by the CDC, ticket purchases will be available online with only a limited number of tickets available. Those wanting to purchase tickets can do so by visiting the ticket link below. No reserved seating is available and any remaining tickets will be sold on the day of the respective events.

Park Jefferson International Speedway pit gates will open at 2 p.m. on Friday and Saturday, May 29-30, with general admission gates opening at 4 p.m. The mandatory All Star drivers meeting will take place at the Series command center, following social distancing guidelines, at 5:30 p.m., followed by motor heat at 6, hot laps at 6:30 and time trials at 7.

A rain date of Sunday, May 31, may be utilized if weather should become a factor during the Friday or Saturday program. If both Friday and Saturday are rained out, tickets from Friday night’s program will be valid Sunday. If either Friday or Saturday night are rained out, the tickets from the respective night that was rained out will be valid Sunday. If the Sunday program is utilized, it will run without a support division and hot laps will begin at 2 pm.