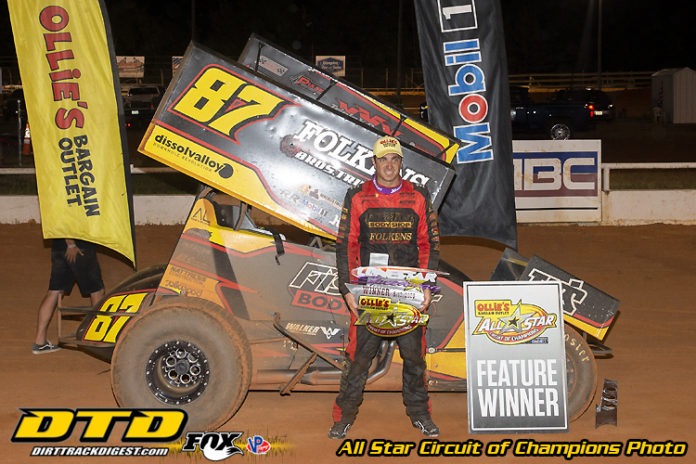 KILGORE, TX – Performing in true championship form, two-time and defending Ollie’s Bargain Outlet All Star Circuit of Champions presented by Mobil 1 titlist, Aaron Reutzel, put on an impressive performance on Saturday evening during his visit to Lonestar Speedway in Kilgore, Texas, ultimately capping the Cometic Gasket Thunder Through The Plains presented by Hercules Tires program with a main event victory, the 30th Series win of his career and scoring $5,000 in the process. Padding the stat book, the All Star triumph was a first in his home state of Texas, decimating the field after taking command on lap 10 and crossing under the final checkers by a margin of victory just shy of four seconds.

The Lonestar Speedway win resulted in Reutzel’s second trip to victory lane during the Thunder Through The Plains campaign, earning the first over Kyle Larson during a barn burner at Red Dirt Raceway in Meeker, Oklahoma, on Friday, June 5.

“The last couple of starts have been frustrating, I’m not going to lie. It’s really taken a toll on me. I feel like we’ve been good enough to be a podium car every night, we’ve just had a lot of dumb stuff happen. But my guys never gave up and they continue to do a phenomenal job,” Aaron Reutzel said, driver of the Baughman-Reutzel Motorsports/Folkens Brothers Trucking/Fischer Body Shop/Hollywood Blasting & Coating/No. 87 sprint car. “I hate to say that only our team works their butts off because every team out here works their butts off. We’ve been at the track every night for the past ten nights. Tonight, it just all finally worked out for us. It certainly wouldn’t be possible with my guys, Jim Bob and Dylan, and all of our great partners.”

Lining up fourth on the 30-lap grid by way of dash result, it did not take long for Reutzel to battle his way toward the front, already powering into second by the time the first two laps were checked off the counter. At the time, Cory Eliason maintained the race lead, utilizing the pole position to earn the top spot after the initial start.

By lap nine, Eliason found himself in traffic, nearly getting caught up with a slower car which allowed Reutzel to close-in on the Rudeen Racing entry. The very next circuit, Reutzel made his move, first pulling even with Eliason through turns one and two, all before driving by his fellow All Star full-timer as the pair raced off of turn four. From that point on, it was the ‘Aaron Reutzel Show,’ picking off slower cars one at a time with ease before earning his fifth All Star Circuit of Champions victory of the 2020 season.

“I’m just trying to represent the great state of Texas the best that I can,” an elated Aaron Reutzel continued, followed by an immediate cheer from the crowd. “To get a win in front of this awesome crowd is phenomenal. I’m glad I could pull it off for my fellow Texans.”

Although Reutzel went on to be unchallenged, Visalia, California’s Cory Eliason was not so fortunate, eventually feeling pressure from third row starter Dominic Scelzi during the closing circuits. Despite failing to get by Eliason, Scelzi certainly made things exciting and fell short of the runner-up spot by less than a ten-thousandths of a second. Refusing to admit he was defeated on-track, Scelzi proceeded to challenge Eliason to a rock-paper-scissors battle in the pit area after the feature was checkered; the result was a tie.

What’s Next:
The Ollie’s Bargain Outlet All Star Circuit of Champions presented by Mobil 1 will conclude the 2020 edition of Cometic Gasket Thunder Through The Plains presented by Hercules Tires with a visit to Chatham Speedway in Chatham, Louisiana, on Sunday, June 14. Those seeking additional information pertaining to the event should visit Chatham Speedway online at www.chathamspeedway.com.

Online Coverage:
Each and every event on the 2020 Ollie’s Bargain Outlet All Star Circuit of Champions presented by Mobil 1 schedule will be broadcast live exclusively at www.floracing.com. To access live and on-demand racing action from the All Star Circuit of Champions, visit www.floracing.com and become an annual PRO subscriber. The subscription unlocks access to premium content across the entire FloSports network. Watch the events across all screens by downloading the FloSports app on iOS, Android, Apple TV, Roku, Amazon Fire and Chromecast. To check out exclusive content, visit https://bit.ly/2XR863e.