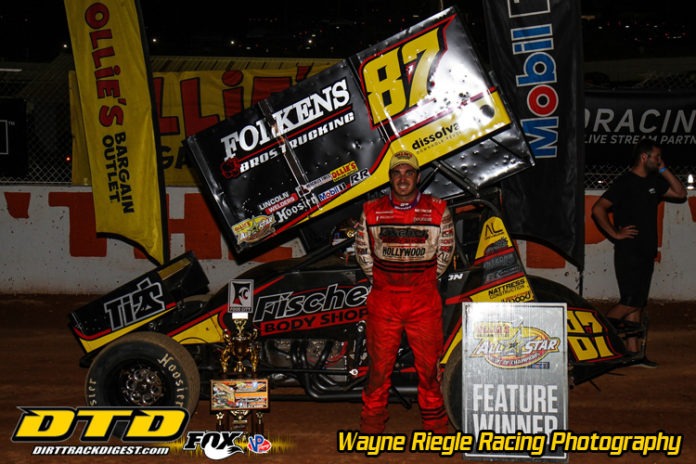 BULLS GAP, TN – It took fifth-starting Aaron Reutzel 23 circuits to track down Ollie’s Bargain Outlet All Star Circuit of Champions presented by Mobil 1 championship rival Cory Eliason, but once the Clute, Texas-native secured the top spot on lap 24, the Texas Sprint Car Nationals main event on the highbanks of Volunteer Speedway was as good as complete. Although forced to endure a green-white-checkered finish, Reutzel’s dominance was clear, eventually escaping to a two-second advantage in just two trips around the speedway.

A sweet ending to a bitter night for the Baughman-Reutzel Motorsports team, Reutzel was forced to change motors after his respective hot lap session, only to be caught-up in an incident during the evening’s dash. The familiar No. 87 did restart the dash, but had to settle with a fifth-place result.

The $5,000 triumph, a first-ever for Reutzel at Volunteer and a first-ever as a full-time All Star in the state of Tennessee, bumped Reutzel’s 2020 win tally to six during All Star Circuit of Champions competition, continuing his chase toward a third consecutive Series title.

Eliason, who led the first 23 laps before losing the top spot to Reutzel, held on to finish second at Volunteer on Saturday night, followed by Nashville’s Paul McMahan and three-time NASCAR Cup Series champion, Tony Stewart.

“Everyone always talks about how good their team is, but I have the best team in the pit area. This was definitely a tough night,” Aaron Reutzel boasted in Volunteer Speedway victory lane, backed by Folkens Brothers Trucking, Fischer Body Shop, Ti22, and Hollywood Blasting. “We had to do so much tonight, but they never gave up and continued to work hard no matter what was thrown at them. They proved why we won the championship the last two years. My team won this race tonight.”

Utilizing the outside-front row starting spot, Visalia, California’s Cory Eliason jumped to the early advantage, quickly driving away from Paul McMahan, Sye Lynch and Tony Stewart. In fact, Eliason’s only challenge during the first 15 laps of the 30-lap contest was in the form of lapped traffic, which came into play for the first time on lap nine. At the time, Reutzel was battling in the fifth position, eventually earning a spot over Stewart to claim fourth on lap 13. Two circuits later, Reutzel was on the move again, this time working by the Pete Grove-owned entry occupied by Sye Lynch.

Working the very topside of turns one and two, and sneaking through the middle and very bottom of turns three and four, Reutzel powered his way around McMahan to take second on lap 20, this time using a slide job between turns one and two to secure the position.

Despite Eliason’s attempt to escape in traffic, Reutzel’s momentum was too powerful to overcome, as the Baughman-Reutzel Motorsports entry cut the near-straightaway lead to less than a car length by lap 22. One circuit later, Reutzel made his first bid for the lead, and although the slider did not stick, a slider the following lap would, driving by Eliason at the exit of turn two on lap 24.

The main event’s first and only caution appeared on lap 29 forcing the aforementioned green-white-checkered finish.

“You could only drive into the corner so hard above the cushion because you would just slide to the fence,” Reutzel continued. “There was only one piece of moisture in that whole corner and that was right along the bottom. When I went in and turned down, I could get a good run down the front stretch. I just kept digging at it and digging at it and I was able to make up some time on people. We were able to track down (Eliason) without a caution and that’s just a statement of how good we were.”

“We were good in one and two, but we struggled in three and four. That’s where Aaron (Reutzel) beat us,” Cory Eliason said, driver of Rudeen Racing No. 26. “He was able to carry momentum a lot better than I could. We are getting a lot closer to where we need to be. This kinda happened to me in Australia where I finished on the podium twelve or so times in a row before I finally won one. Sometimes finishing second can get frustrating. Hats off to my team. We were fast all night.”

What’s Next:
The Ollie’s Bargain Outlet All Star Circuit of Champions presented by Mobil 1 will continue their weekend in the Volunteer State with a second consecutive appearance at Volunteer Speedway in Bulls Gap, Tennessee, on Sunday, June 28. The Texas Sprint Car Nationals finale will award a $5,000 top prize.

Online Coverage:
Each and every event on the 2020 Ollie’s Bargain Outlet All Star Circuit of Champions presented by Mobil 1 schedule will be broadcast live exclusively at www.floracing.com. To access live and on-demand racing action from the All Star Circuit of Champions, visit www.floracing.com and become an annual PRO subscriber. The subscription unlocks access to premium content across the entire FloSports network. Watch the events across all screens by downloading the FloSports app on iOS, Android, Apple TV, Roku, Amazon Fire and Chromecast. To check out exclusive content, visit https://bit.ly/2XR863e.