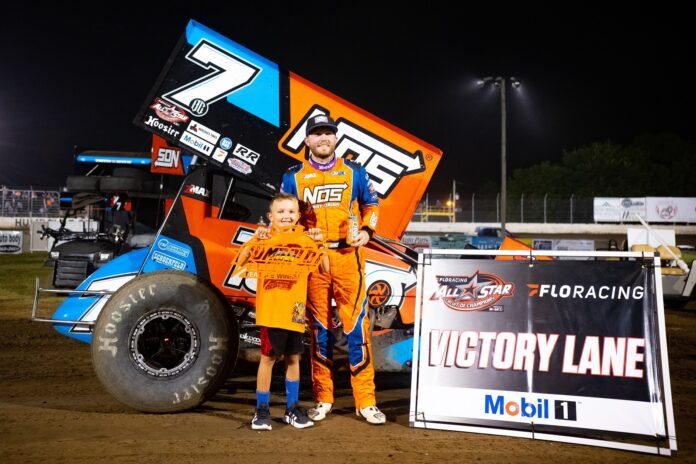 HUMBOLDT, KA – Solidifying his name in the FloRacing All Star Circuit of Champions presented by Mobil 1 history books yet again, Indianapolis, Indiana’s Tyler Courtney is officially the first-ever All Star winner at Humboldt Speedway in Humboldt, Kansas, scoring a $6,000 payday in the process while simultaneously bumping his All Star season win total to six.

The current All Star championship points leader and pilot of the Clauson Marshall Racing No. 7BC accomplished his Kansas triumph from the inside of row two, working by Hunter Schuerenberg on lap 11 before chasing down Rudeen Racing’s Cory Eliason in heavy traffic. In fact, Courtney did not take command until lap 27, utilizing a slider through turns one and two to put Eliason in his rearview mirror.

“Hats off to the entire team. They’ve been busting their butts out here in the heat the last three days so they deserve to celebrate. It’s been almost two months since we won our last All Star show. I know we just won one of the biggest races of the year, but when you’re out here on the road, you want to win all of the time,” Tyler Courtney said, driver of the Clauson Marshall Racing/NOS Energy/Turbo/No. 7BC. “It feels good to be back in victory lane, that’s for sure.”

Despite losing command with less than five circuits remaining, Eliason’s path to the podium was just as head-turning as Courtney’s, ultimately driving forward from row three to the lead in less than two laps. Impressive enough, the Visalia, California-natve was able to maneuver around four cars in just two corners, taking advantage of some turn one confusion that included Schuerenberg, Courtney, Zeb Wise, and Cale Thomas. By the time Eliason had reached turn three on lap two, he was in command, eventually setting sail before finding himself in thick, heavy traffic.

Although Eliason did his best to outrun Tyler Courtney in traffic, the 38th Kings Royal champion persevered and eventually found his way to the Rudeen Racing back bumper. Courtney was pressuring hard by lap 25, then the aforementioned slider occurred on lap 27.

“I just kinda rode around for a while without letting him get too far ahead. He did manage to get away from us a little bit, so I knew I had to pick it up some and see what we had,” Courtney continued. “It was all about getting through turns three and four tonight. If you could clear the lappers and get yourself through three, you were going to be OK.”

“The lapped cars were tough tonight,” Cory Eliason said in response. “You had to be really careful. I think I may have used our stuff a little too early and faded toward the end. We were one short, but it still makes us hungry for more.”

After an off day on Monday, July 26, the seven-race All Star swing through America’s heartland will continue with a Tuesday night visit to the recently revamped I-70 Motorsports Park in Odessa, Missouri, on July 27. The midweek blockbuster will award a $7,000 payday, welcoming the Series back to the Show Me State after their short stint in neighboring Kansas.