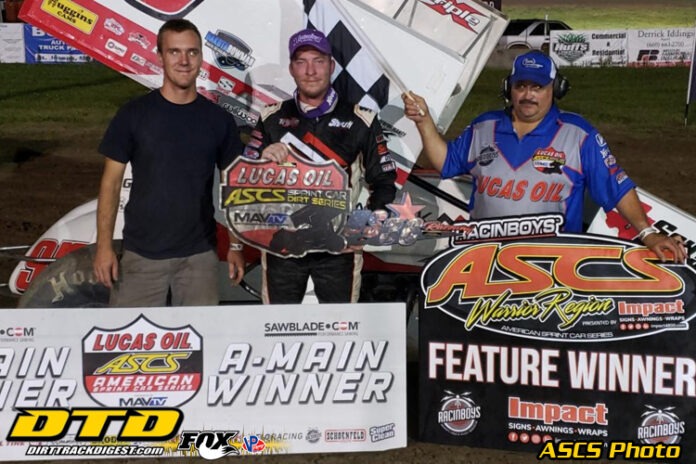 “It got pretty hairy in traffic. Even showing the right rear to a few guys, they weren’t going to give an inch, so I felt like I had to earn everything. A few times, Garet could have easily forced me off the top of the backstretch, but he left me room, and I appreciate that. A few guys wouldn’t do that, but that’s what a clean racer does. He did me right and raced me,” stated Covington when asked about the close battle with the No. 24 through traffic.

The win is Covington’s first at U.S. 36 Raceway and 12th overall in National Tour competition while moving him to within 18 points of the championship point’s lead.

Rolling to the green from the pole position, Covington would fall to second on the start as Garet Williamson took command from the right of the front row. Setting a torrid pace into traffic on Lap 5, the slower cars allowed Covington to close and finally overtake the Mid-Mo Equipment No. 24 on Lap 8.

Getting some breathing room over the No. 24, the gap was short-lived as traffic brought Williamson, Hickle, and eventually Hahn into the mix.

Three wide for the runner-up spot on Lap 17, Williamson held the runner-up spot. Taking a shot at the lead, Covington used slower cars as picks, with Hickle and Hahn both looking for a path to the lead. Working Lap 19, the leaders raced into the third and fourth turns only to be greeted by a pair of flipped cars. Scrambling to avoid, Hickle was not able to avoid and ended up going for a ride. Following a trip to the work area, the No. 63 was able to continue.

Back to green, the A-Rock Material No. 95 rolled into traffic just as red lights came on again for Jason Martin, who had been running fourth.

Setting up a green, white, checkered finish, Covington dashed to a 0.940-second advantage at the checkered flag. Posting his best career finish in National Tour competition, Garet Williamson held on for second over Blake Hahn, who climbed through the field from the 12th starting spot. Posting her first career top-five finish, Canada’s Alex Hill made up three positions to finish fourth, with Oklahoma’s Brandon Anderson in fifth.

The field of 24 teams was split into a trio of SCE Gaskets Heat Races, with wins going to Jay Russell, Garet Williamson, and Jason Martin. Everyone qualified for the A-Feature.

SCE Gaskets Heat Races (Everyone advances to the A-Feature)