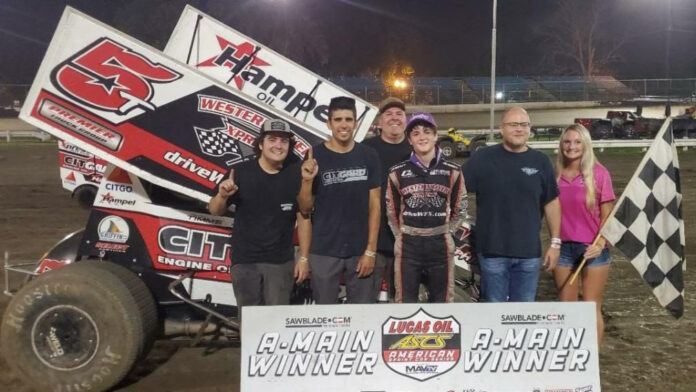 WEST MEMPHIS, AR – Remember the song “One Piece At A Time”? Well, it was one lap at a time, but it was exciting on Night 3 of Lucas Oil ASCS Sprint Week presented by Smiley’s Racing Products as Ryan Timms found himself making the right moves at the right time to take over the lead and hold on for Sunday’s score with the Lucas Oil American Sprint Car Series presented by the MAVTV Motorsports Network.

Working through a myriad of cautions and red flags, the SawBlade.com A-Feature came down to a massive battle for the win that resulted in a bigger crash. Looking like Jeff Swindell’s race to dominate, the No. 94 tripped up just enough on Lap 26 to allow Matt Covington to move in. With a wave of momentum, Covington took over the point the following lap.

To the white with the win in sight, slower traffic in the final two turns presented Jeff Swindell an opportunity to pull off the upset. Going full send to the bottom of the third turn, Swindell slid past Covington for the lead, but too much momentum into the cushion stalled Jeff’s run and caused the No. 94 to get tight and make contact with the wall. Leaving Covington with no way to avoid the No. 94, Matt slammed into Swindell, with Blake Hahn also getting caught up in the crash.

“I killed a lot of my momentum there and let Jeff get a run on me. I don’t know how close he was or how big a bomb he threw, but he cleared me, and when I tried to turn underneath him, he just got tight in the cushion, and it barely collected me. It just sucks for all three of us,” commented Covington of the incident.

Going red just as Ryan Timms shot by the crash, the checkered flag was not displayed, and the field dashed to a green, white, checkered finish with Timms able to fend off Dylan Westbrook.

On seeing what was going on as the leaders raced into the final two turns, Timms said, “I slid Blake earlier in the race in that same corner, and I didn’t even slide him that hard, but there wasn’t much up there, so I bounced off it and pulled a big wheelie. When I saw Jeff go to slide as hard as he did, I knew that wasn’t going to end well, so I was ready to diamond the corner just in case, and thankfully, that was the right decision.”

Setting up for the final two laps, Timms was more just trying to cool off before the field refired from the open red.

“I was dumping water everywhere on me. I was ready to get out of the car but needing to stay focused on the race and hitting my marks. I knew Westbrook was behind me and didn’t really know how fast he was. He’s good, so I was just trying to keep myself consistent and not crash.”

Westbrook’s third podium in as many races, the No. 47x, was followed by J.J. Hickle, who had to pass most of the field twice after going to the work area on Lap 2. The hard charger with 18 positions officially gained, Hickle was in a battle through the final two laps with Ernie Ainsworth, who ended up fourth. Cody Gardner from 20th made all the right moves to complete the top five.

Able to return from the incident, Covington finished sixth with Hayden Martin seventh. Tyler Thomas from 18th made it to eighth, with Paxton Gregory and Jeff Swindell completing the top ten.

Creek County Speedway is located at 18450 West Hwy. 66 between Sapulpa and Kellyville. For more information on Creek County Speedway, including a complete lineup of events and directions, log onto http://www.creekcountyspeedway.co or call (918) 247-RACE (7223).