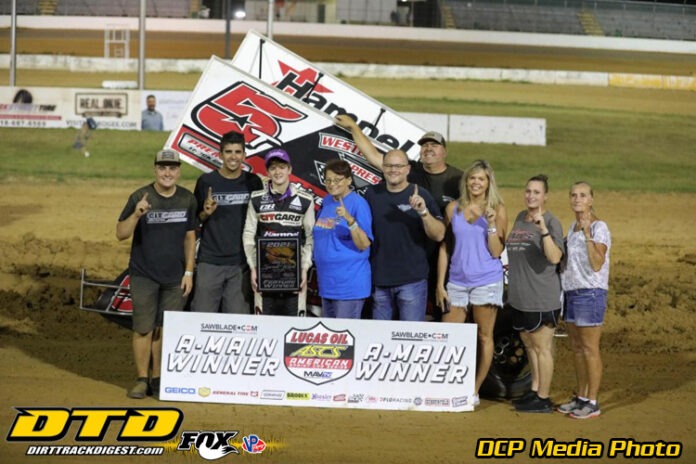 OKTAHA, OK – While it took a while to get there, Ryan Timms continued his hot streak with the Lucas Oil American Sprint Car Series presented by the MAVTV Motorsports Network with his fifth career victory on Saturday at Outlaw Motor Speedway, and with it, captured the top spot in the 2021 Lucas Oil ASCS Sprint Week presented by Smiley’s Racing Products.

“I wasn’t expecting any bit of it,” replied Timms when asked what he expected going into the week.

“We ran out in California before we came and ran this and didn’t do very good, so I wasn’t really feeling good about this week, but once we got rolling and finishing well, I knew we could do it. Thanks to my team. Them and the sponsors are the reason I get to do this and props to the track. It was really racy for us after they got it worked in.”

Having to correct a mistake in track prep that resulted in the track being overwatered, the night’s races got off to a late start but moved right along once the track was safe to compete on. Winning his Heat Race from third that set Timms near the top of the redraw, where he drew the right of the front row. Chasing Alex Hill through the opening lap, Timms slide the Hills Racing Team No. 77x on the second lap.

Keeping pace through a handful of cautions, and a red on Lap 3, traffic did little to slow the DriveWFX.com No. 5t in the later stages of the event, with Timms pulling away by 2.491-seconds at the drop of the checkered flag.

Racing to second from 10th, Matt Covington worked to the runner-up spot on Lap 17 and ended up being the night’s Hard Charger. The run also brought him back within five points of leading the championship standings.

A rebound run from Friday night, Jason Martin ended his Sprint Week with a third-place finish, marking the sixth time the Kansas shoe has placed on the podium in National Tour competition. Alex Hill held on for fourth, and her second time finishing in the top five with the National Tour. Up from eighth, J.J. Hickle crossed fifth.

Blake Hahn ended up sixth after nearly slipping back to tenth in the back-half of the A-Feature. Jeremy Campbell was seventh with Colby Thornhill eighth. Alex Sewell and Arizona’s Nick Parker completed the top ten.

In all, 81 drivers took part in the eight-race run, with seven drivers making all every A-Features.

Ryan Timms was .500 on the week with four wins. Dylan Westbrook, Matt Covington, Blake Hahn, and Dale Howard took the other four victories. Timms was the champion, followed by Dylan Westbrook, Matt Covington, J.J. Hickle, and Blake Hahn to make up the drivers earning their share of the $10,000 worth of in-store credit at Smiley’s Racing Products. Ten teams made the trip to every event.

The next event for the Lucas Oil American Sprint Car Series presented by the MAVTV Motorsports Network is “The Road To Knoxville,” presented by Terry Mattox Promotions and Racinboys.tv at Lakeside Speedway on Tuesday, August 3. Information on the event is online at http://www.lakesidespeedway.net.

SCE Gaskets Heat Races (All Drivers advance to the A-Feature)