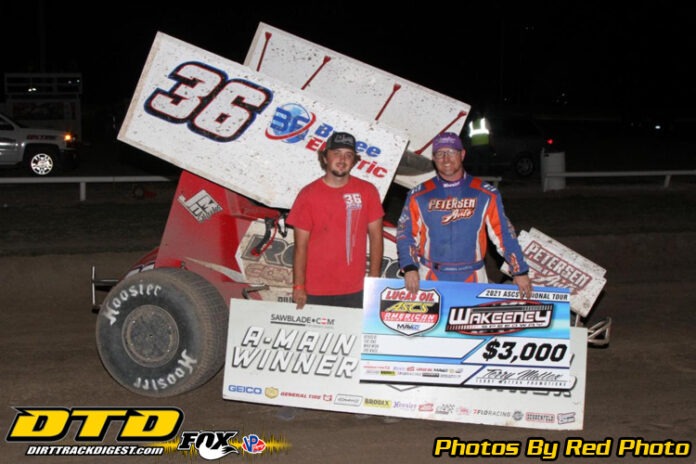 The third time that Martin has topped a SawBlade.com A-Feature, his last visit was just down the road at the former Great American Dirt Track in his hometown of Liberal, Kan. on May 26, 2012.

Getting the lead over Dylan Westbrook at the start, the pair found traffic working Lap 8 as the caution lights came on. Putting the field back to Lap 7, Martin again took the same amount of time to find the back of the field, but this time the red lights would come on as a parts failure in the steering system of Scott Cochran’s car sent him sailing violently into the wall off the top of the fourth turn. Thankfully, the driver was ok.

Back to green with nine laps to go, Westbrook again trailed.


Finding something in the closing laps, the No. 47x cut substantial time off the advantage held by Martin, but it would not be enough as the No. 36 found the checkered flag with 0.778-seconds to spare. Westbrook in second was joined by Matt Covington on the podium, who ended up losing nearly all his brakes in the closing laps. Ryan Bickett held off the charge of J.J. Hickel for fourth, with the No. 63 driver setting for fifth.

The next event on the 2021 lineup is the Lake Ozark 360 Nationals at Lake Ozark Speedway on Saturday, September 4 and Sunday, September 5, with Sunday’s showing paying $5,000 to the winner. More information on the track is online at http://www.lakeozarkspeedway.net.

SCE Gaskets Heat Races (All drivers advance to the A-Feature)