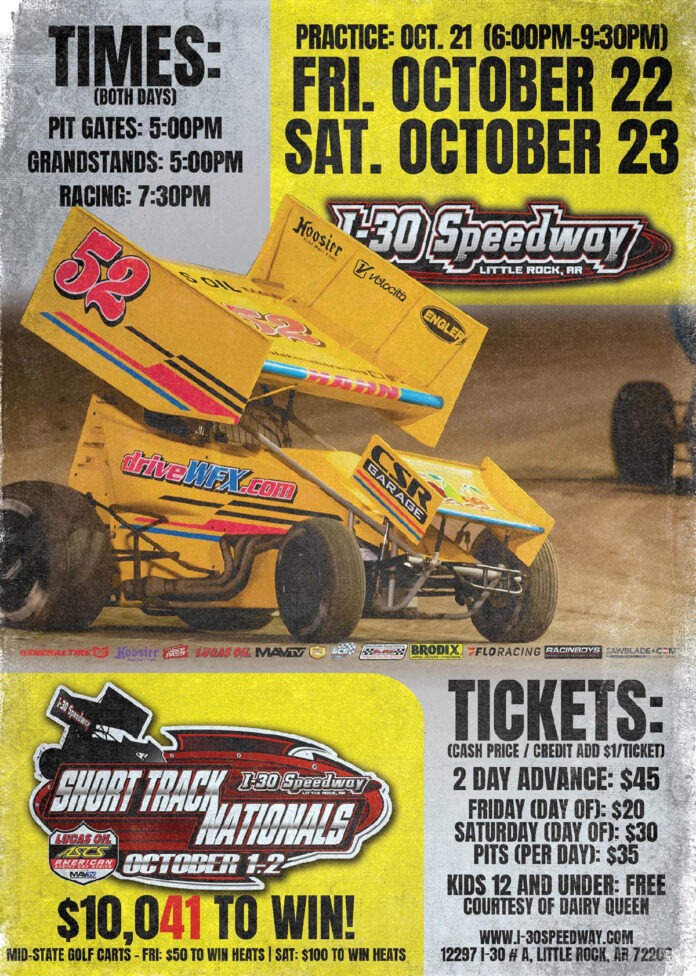 LITTLE ROCK, AR – The wait just became a little longer for the highly-anticipated 34th running of the COMP Cams Short Track Nationals presented by Hoosier Tires atop the I-30 Speedway clay oval.

Increasingly high percentages of rain throughout the upcoming weekend have forced I-30 Speedway track promoter Tracey Clay and ASCS officials to reschedule the event for Thursday through Saturday, October 21-23.

“I really hate that we have to postpone the event, but it would be even worse to have racers and fans come from all over the country just to sit in the rain all weekend,” Clay commented. “Fortunately, there is a weekend available that isn’t in conflict with any ASCS schedules or anything nearby, so we can just hope for favorable weather conditions on October 21-23”.

Tickets already purchased for this weekend will be good for the rescheduled date.

Online tickets will remain available while driver pre-entry will be extended to Monday, October 18.


Among a slew of early entries thus far is reigning STN kingpin Sam Hafertepe, Jr., who will vie to become just the sixth racer to score back-to-back STN wins along with the likes of Steve Kinser, Gary Wright, Tony Bruce, Jr., Sammy Swindell and Blake Hahn.

The Format: Friday’s preliminary event will be contested under a derivative of the All-Star Circuit of Champions format, with group qualifying establishing heat race lineups with an invert of four in each heat race. The Friday preliminary will conclude with “Twin 20’s”, a pair of $1,500-to-win 20-lap “A” Main events.

The top two from each of the “Twin 20’s” will be locked into Saturday night’s “Dash for Cash” and the championship main event.

Friday events points accumulated will be carried over to Saturday night, with another set of heats utilizing passing points added to the Friday total to set the championship feature lineups. The top two in combined points from Friday night and the Saturday heat races with join Friday’s four lock-ins in the Pack Building Materials “Dash for Cash”. The next eight in points will occupy STN championship feature positions 7-14 with the balance of the field in “B” and “C” Mains. Three will transfer from both “B” Mains to set the 20-car feature field. The 21st position is reserved for I-30 Speedway track champion Howard Moore should he find it necessary.


The Tickets: Advance two-day tickets are $45.

Children under 12 are admitted free on both nights courtesy of Dairy Queen.

To order tickets or for more information, check online at https://i-30speedway.com/short-track-nationals/ or call the track at 501-455-4567.

The Broadcast: If you can’t make it to the STN to catch all the breathtaking action in person, no need to fret as you can catch it all live online at www.floracing.com.