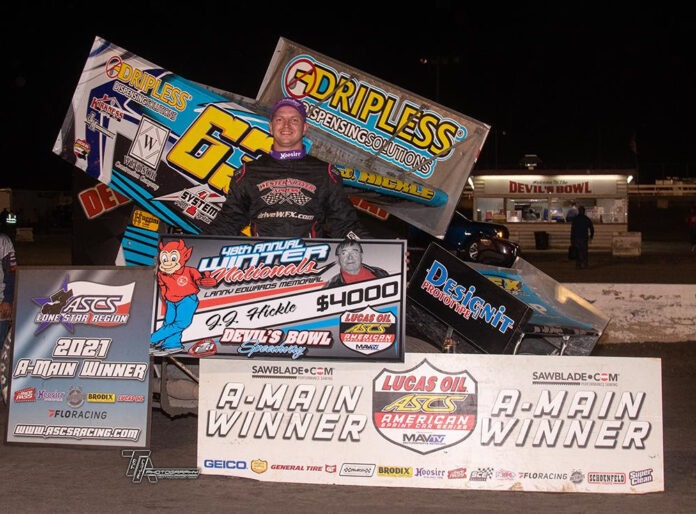 MESQUITE, TX – Three trips to the Devil’s Bowl Speedway in 2021 and three trips to Victory Lane later, J.J. Hickle added his name to the list of winners at the 48th running of the Devil’s Bowl Winter Nationals and Lanny Edward Memorial with the Lucas Oil American Sprint Car Series presented by the MAVTV Motorsports Network.

“I grew up racing on bigger tracks and just feel at home here,” commented Hickle. “It’s Jane’s [Worden] birthday this weekend, so we had to get her the checkered flag she was looking for. It’s awesome to come to such a prestigious place like this and be fast.”

Hickle’s fifth SawBlade.com A-Feature victory of the season, the Washington shoe, was the third driver to lead laps Saturday night. Finally rolling laps after the third start, the opening 12 laps went the way of Johnny Herrera.

Wheeling, the SawBlade.com No. 28 for Scott Bogucki, the wily veteran, found traffic on Lap 10. Reducing a half straightaway lead down to car lengths, Dylan Westbrook was on Herrera for the point in less than a lap. Working around slower cars, Dylan Westbrook found the line on the No. 28, with the AFEX Graphics No. 63 following into second. Working low on the Hills Racing No. 47x, Hickle shot under Westbrook for the top spot on Lap 15.

On the pass, Hickle said, “Dylan and I have raced a lot against each other of the past few months, and that was a deal where I was trying to figure out what he’s thinking and see if I can make something else work and it looked like he was rolling the middle pretty well, so I started working the bottom and started gaining and just focused on staying with him until the right time where I could clear him. With a guy like that, if you show him the bottom, he’s going to go there. I just had to be patient and not show my hand too early.”

Caution on Lap 17, Hickle had a new pursuer in the form of Blake Hahn. Locked in the championship battle with the No. 52, clean air was the advantage for J.J. as the field went back to green. Putting over a second on Hahn before the race’s final stoppage working Lap 23, the restart put the field back to Lap 22.

Trailed by Hann for a couple of laps, Hickle steadily pulled away over the final five rotations, with the Jane and Ivan Worden owned entry finding the finish 2.685-seconds ahead of Blake, with Sam Hafertepe, Jr. rolling from 12th to third in the Hills Racing No. 15h. Dylan Westbrook ended up fourth with Johnny Herrera fending off Ricky Stenhouse, Jr. for fifth.

The NOS Energy Drink No. 17 of Stenhouse in sixth was followed by Kade Morton in seventh. Iowa’s Chris Martin was eighth, with Jack Dover ninth. Chance Morton completed the top ten.

A field of 24 was on hand for the Winter Nationals and Lanny Edward Memorial. A trio of SCE Gaskets Heat Races went to Martin Edwards, Johnny Herrera, and Dylan Westbrook. No provisional starts were needed.

The final two rounds of the 2021 season are next, with Hahn and Hickle only 52 points apart. The championship will be settled at the COMP Cams Short Track Nationals presented by Hoosier Tires on Friday, October 22, and Saturday, October 23 at I-30 Speedway in Little Rock, Ark. Tickets and event information are online at http://www.i-30speedway.com. The race will be shown exclusively on FloRacing.com.

SCE Gaskets Heat Races (Everyone goes to the A-Feature)

Sawblade.com is the official SawBlade of the American Sprint Car Series and title sponsor of every National Tour A-Feature and Victory Lane. For more information, log onto https://www.sawblade.com and follow Social Media at @SawBladecom on Twitter, on Instagram at Sawblade.com_, and Facebook.

Associate sponsors for the Lucas Oil American Sprint Car Series presented the MAVTV Motorsports Network include Hoosier Racing Tire and Brodix. All Heat Races are brought to you by SCE Gaskets. All B-Features are presented by BMRS.