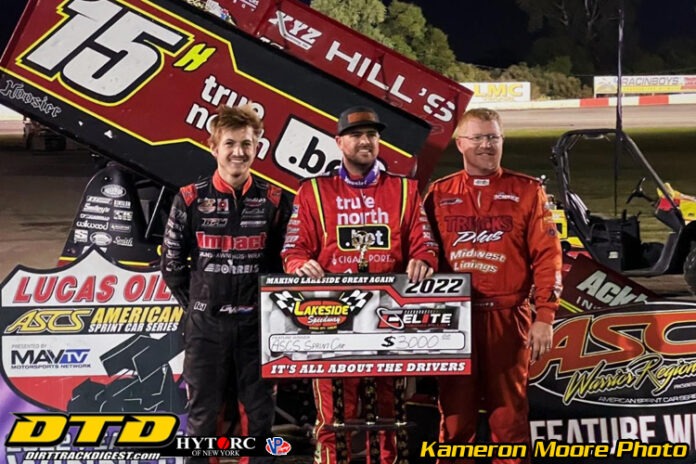 KANSAS CITY, KS – Thursday night at Lakeside Speedway was all about Sam Hafertepe, Jr., as the driver of the Hills Racing/Heidbreder Foundation No. 15 dominated the Lucas Oil American Sprint Car Series presented by the MAVTV Motorsports Network.

Leading flag to flag for his third National Tour score of the season, and 61st since 2010, the win makes Hafertepe the first repeat winner with the Lucas Oil American Sprint Car Series in eight tour appearances at the Kansas oval.

“It’s fun to get on big tracks like this where we can get on the wall and race like that,” said Sam, who is third all-time in wins with the National Tour.

“We’re still working on the car. We were trying a left rear shock package tonight that is different from what we normally run, but luckily, we were able to work out front and get the win, but we still have some work to do when we’re not in clean air. We always want to be better, and without Miles [Hill] and everyone who helps us, we couldn’t do this.”

Battling through the opening lap with Matt Covington, the No. 15h found his stride quickly to begin pulling away. Into traffic in the first seven laps, Sam was quick to move on the slower machines as the battle for second began to pick up between Matt Covington and Dylan Westbrook.

Able to work back to silver on the No. 47x, the race for second turned into a three-car battle with the No. 24 of Garet Williamson into the mix. Cat and Mouse through traffic until Lap 20; red lights came on as Westbrook slipped through the cushion in the first turn and flipped violently into the fence. Dylan was able to walk away as the track went under an open red to repair the fence.

Restarting at the last fully completed lap, the green flew with 19 in the books.

Using slower cars in the lineup to his advantage, Hafertepe was quick to run away as the race for second picked up where it left off, but with a new contender as Jason Martin pursued the position.

Unstoppable to a 7.513-second advantage for Hafertepe at the finish, it was Garet Williamson who came out on top of the race for second. Making the pass on Covington on Lap 23, the No. 24 was followed by Jason Martin for his 13th career podium finish. Matt Covington ended up fourth, with Wayne Johnson battling his way to fifth after starting eleventh.

Riley Goodno crossed sixth, with Blake Hahn moving from 12th to seventh. Jake Bubak, after suffering a flat in his Heat that relegated him to 19th on the grid, advanced to eighth, with Chris Martin ninth from 13th. Making a run after the restart, Ryan Bickett improved to 10th from 16th.

The 23-car field broke into a trio of SCE Gaskets Heat Races. Wins went to Sam Hafertepe, Jr., Jason Martin, and Dylan Westbrook. The Driver’s Project overall quick qualifier was Jake Bubak, who set a new ASCS Track Record at 14.560-seconds. The previous record was established on August 2, 2022, by Blake Hahn at 15.023-seconds.

The next event for the Lucas Oil American Sprint Car Series presented by the MAVTV Motorsports Network is Saturday, September 10, at Caney Valley Speedway for the Sooner/Shocker Showdown.

Featuring fireworks following the races, the night is co-sanctioned with the American Bank of Oklahoma ASCS Sooner Region presented by Smiley’s Racing Products and will also include Factory Stocks, Pure Stocks, and USRA Tuners. Pits will be open during the day for teams to pull in. Grandstands open at 5:00 P.M. with racing at 7:00 P.M. (CDT). Tickets are $20 for adults, $15 for seniors, and free for kids 12 and under. Pits are $40. Caney Valley Speedway is located at CR 1300 in Caney, Kan. More info on the Speedway can be found at http://www.caneyvalleyspeedway.net or by calling the track at (620) 330-0485.

SCE Gaskets Heat Races (All drivers advance to the A-Feature)