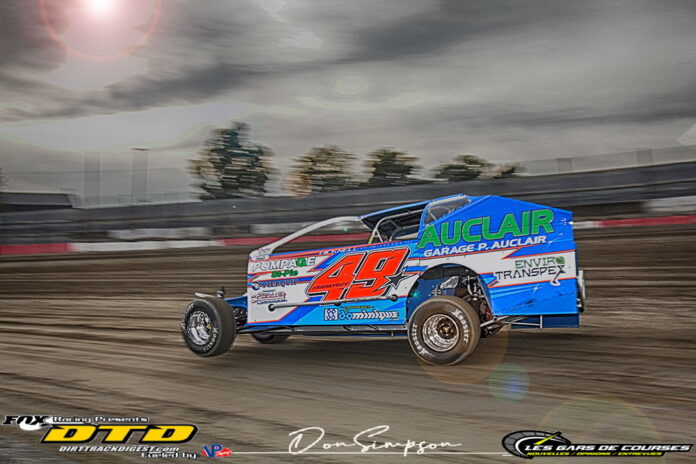 DRUMMONDVILLE, QUE – Another beautiful sunny Saturday at Autodrome Drummond for the annual pit stop challenged presented by Gougeon & Frère. The pits were well filled, with 72 cars in the Sportsman and 358-Modifieds divisions only.

For the 70-lap Modified main event, the drivers had to participate in the popular pit stop competition in front of the main grand stands to determine the top 12 on the grid for the feature. Mario Clair (#22c), who has always been the legitimate crowd favorite in Drummond, won the competition and started on the pole for the 70-lap affair.
On the first lap, Steve Bernard (#54) collided with the wall in turn number 4. The car suffered great damage and he was unaible to continue.

Clair remained the leader for several laps. Behind him, François Bernier (#49) was not far away. He managed to get an advantage over Clair on a restart, but the fight was not over. Clair regained the lead as he was in traffic on lap 29. The fight was really close and kept everybody on the lookout as the leading drivers were getting through lap cars at a terrific pace.

David Hébert (#1) was getting closer from Bernier on lap 32. They traded the position a couple of times with Bernier gaining the lead on lap 41.

On the 46th lap of the event, the yellow flag gets out for a second time with a crash involving Claude Brouillard (#3), Jeffrey Lapalme (#88) and Yan Bilodeau (#23).
The restart iwas advantageous for the Bernier clan. Steve (#25*) joined his brother as he took over the second place and took a pretty nice advantage in front of Hébert. The race took a torrid pace without any issues with the leaders getting through thick traffic with relative ease.

For the second night in a row, the Bernier brothers were able to finish one and two, but switching the drivers this time. François Bernier was the man to beat once again in Drummond as he his still undefeated in the 358 division with a third consecutive win. Steve would finish second in front of Hebert, Jean-François Corriveau (#96) and Clair. It has been a remarquable season as of yet for the Bernier brothers in Quebec.

The Sportsman division has been flourishing in the last few years in Quebec and it was no different on Saturday night with a total of 38 cars packing the pit area.
For the 32-laps main event, Donovan Lussier (#00), Christopher Cormier (#95) and Kaven Poliquin (#49) were the first three drivers to take the green flag.

After a caution on the first lap for a crash involving several driver, the front of the field gets all shaken up with many changes in position. Antoine Parent (#17) took the lead followed by Junior Mailhot (#101). With 13 laps in, Poliquin was able to get the lead followed closely by William Racine (#35r). In the late stages, Racine was biding his time and finally was able to get past Poliquin for the lead with 7 laps to go.

Racine, the defending champion in Drummondville, was able to get his first win of the year at the track. Poliquin finished second in front of Michael Richard (#3m), Mailhot and Parent.
Autodrome Drummond will take a few weeks off before getting back at it on Saturday August 21 with the Topless night. Ladies will be allowed to enter the grandstands for free and the Modifieds will take their tops off for the occasion.