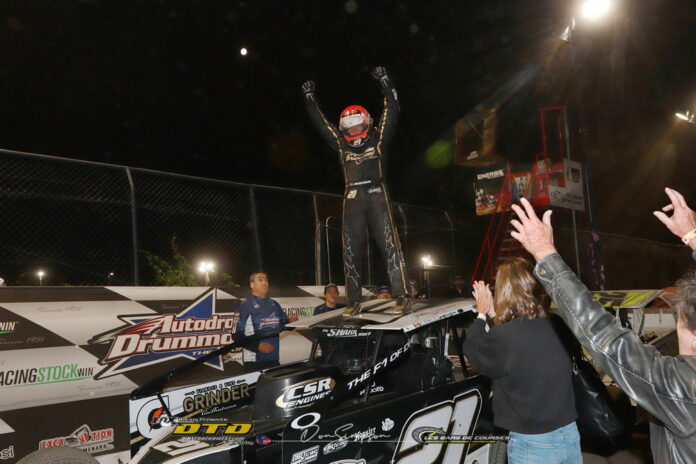 DRUMMONDVILLE, QUE – Promotor and racer at Autodrome Drummond, Yan Bussière was presenting the 17th edition of his annual event Racemania. 358 Modified, Sportsman, Pro-Stock, Lightning Sprints, Modlites, MidgetSTR, and Slingshots were on the card. A total of 168 cars were in the pits for this event.

The main event was a 70 lap feature for the Modifieds. Lucky at redraw, Yan Bussière started up front and led the first part of the race before jumping the cushion in turn 2. He was able to climb back on track in 4th. Sébastien Gougeon took the lead but the traffic slowed him down and David Hébert took the lead. On a restart, Hébert and Gougeon touched and Hébert fell to 4th place behind Gougeon, Michael Parent, and Bussière. The 21 machines of Bussière took the lead again a couple laps later and he was able to resist the late charges of Michael Parent to win his first Modified race of the year. Parent finished 2nd and got a fourth consecutive top 3. Hébert rallied to finish 3rd. One time Nascar truck winner Raphaël Lessard was present and he won his heat and did a good job in the feature to finish 8th in his first race in Drummond.

The Sportsman race saw William Racine take the lead from Félix Murray on lap 21 and win the 32 laps feature. His 11th win this year. Maxime Blain finished second after many hard battles and veteran driver Jean-François Tessier took third place. 39 cars were in the pits. Bruno Richard got the win in the 50 laps feature of the Farnham Ale & Lager Pro-Stock series. He finished in front of Gabriel Caouette and Jocelyn Roy in a caution-free race. Pascal Payeur and Yves Hamel finished 4th and 5th.

The Lightning Sprints Immovex series ran a 20 laps feature and Tomy Moreau took the win and championship lead. Before the night, he was in a battle with veteran Stephane St-Laurent for the lead in points but St-Laurent broke his engine in the feature while battling for second. Moreau took the checkered in front of Alex Therrien and Éric Sundborg. ModLite Quebec was on the card and it was another Keven Boucher-Carrier show. The young driver is dominating the series this year and he won easily on Saturday. Éric Desilets and Steve Comeau finished with him on the podium.

Fans were thinking that Yan Bussière could win another race in MidgetSTR as he is the class of the field this year in Drummond but at the end of the race, it’s his friend Carl Labonte that took the checkered flag. He finished in front of Maxime Plante and Bussière.

Future stars of dirt racing were also on display as both categories of Slingshot were racing on the Mini-Drome. In the Junior class, Jacob Nadeau came back from an early race contact to win the race in front of Logan Carrier and William Pelletier. In the Senior class, Yoan Nault worked hard to pass Claudie Lizotte to win the race. Lizotte finished 3rd as Daphné Hébert got by her by inches at the line.