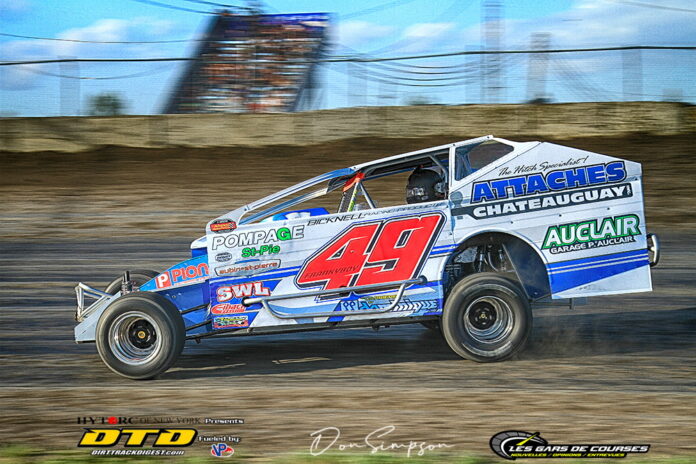 DRUMMONDVILLE, QC – The action moved to Autodrome Drummond for the traditional pit stop contest and the final round of the Canadian Side Panels Series. We also had the Sportsman, Modlite, Pro-Stock, and Slingshot in action.

In 358 Modified We witnessed the best finale of the season for the Modified with a lot of overtaking and battles at the front. François Bernier got the better of Sébastien Gougeon who led a large part of the race. Luke Whitteker finished 3rd after overtaking many cars in the final laps of the race. With his 2nd place, Sébastien Gougeon is the champion of the 2022 Canadian Side Panels Series. During the pit stop competition, Jean-Francois Corriveau, helped by Yan Bussière’s teammates, won the barrel of VP courtesy of DL Performance and the pole.

In Sportsman, We witnessed the first 1-2 for the young WDM team as William Racine won the race ahead of Donovan Lussier. Maxime Blain did very well with a nice 3rd position. Note also the 4th place of Alan Carrier and the comeback of Samuel Charland to finish 5th. Modlite Absent from the last 3 races of the Modlite Quebec Series, Keven Boucher-Carrier came to set the record straight with a simply dominant performance. He flew over the competition to finish ahead of Éric Desilets and Antonin Lafleur who earned a very popular podium.

Pro Stock Pascal Payeur was quite simply in a class of his own tonight as he dominated the Pro-Stock feature. Bruno Cyr finished 2nd while veteran Alain Brochu took 3rd place. Slingshot William Pelletier took the victory in Slingshot JR while on the Senior side, Olivier Desrosiers took the victory ahead of Logan Carrier and Loik Messier. An evening of racing that ended at 10 p.m. with a poignant tribute to Erick Leveillée. It has been 20 years this season since his terrible accident and he is an example of resilience and courage.