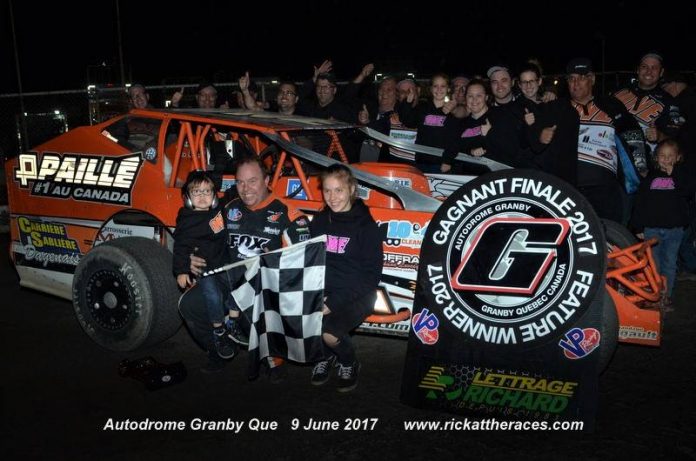 (TRANSLATED) GRANBY, QUE – The evening of Friday, June 9, 2017, each final held us spellbound until the checkered.

The 89 Samuel Hebert leads the first 9 rounds. To the recovery that follows, Pierre – Olivier Breault #20 flows first in front of him. In the round 10, Marc Dagenais #66 made outside of Hébert for the second. Gabriel Marquis #22 made the inside of Dagenais in the 13th round. In the 16th round, Marquis slides. Claude Cournoyer #47 and Reno-Karl Quirion #40 benefit. In the 17th round, Marquis takes up a place before Quirion to be 4th. Two laps from the end, Dagenais made booth inside for the pole. In the last turn, Cournoyer passes inside Breault and Marquis done the same from the outside.

Marc Dagenais and Claude Cournoyer would have failed the post-race inspection. Mr. Steve Salvas, race Director, will officially announce the disqualifications (if there is one) soon.

Stéphane Lebrun #6 runs the test for 10 laps. The resumption of this same tour, Rob Yetman #7 out 8th becomes the leader and would never leave this place. 47 Dave Bissonnette is 3rd. The revival of the round 13, Stéphane Lemire #115 rises before Bissonnette. The latter resumes at Lemire 3rd place at the 16th round by the outside. Lap 27, Bissonnette passes Lebrun for 2nd place. When using the 36 round, François Adam #01 alongside the 115 Lemire for 4th place. Lap 38, enters the top 5 Jocelyn Roy #48 gone 11th by Lebrun inside who lost positions. Turn 40, Bissonnette, who was 2nd left to wells. Yetman continues his reign, followed by Lemire and Roy. Roy manages to exceed Lemire by down to the 2nd position in the revival of the Tower 42. In the last round, Lemire always from the inside will be faster than Roy at the finish line. A similar battle took place just behind them between Adam and Jay Corbin # 8 c. Corbin was 6th since the resumption of the round 42. On the first restart of lap 47, Jay is the bottom of the 97 d of Dan Older to then fight with Adam perched at the top. Adam will be faster for his 4th place finish.

Pierre Hébert #71 leads to the 25 lap where the ONE of David Hébert exceeds by inside. Hébert never left the pole. The 79 Maxim plant exceeds Pierre at the same time for the 2nd place. In the 28 round, Steve Bernard #54 made outside of the 71 in turn for the 3rd position. In the round of 32, Bernard made plant inside for the 2nd place. François Bernier #49 gone 15th, reach the top 5 by exceeding the 96 Jean-François Corriveau in the 37th round. Two laps later, François exceeds Pierre Hébert for 4th place. To restart the round 44, Bernier #49 exceeds plant for his place on the third step of the podium. His brother, Steve Bernier #25 * takes advantage of the same stimulus to 6th. In the next round, Steve goes beyond Corriveau 5th final position.

Jonathan Nadeau #9 goes first and the rest until the 23rd. Félix Murray #95 gone 6th ensures a podium in round 5 from 3rd to the 48 of Patrick Picotin. In the round 9, Murray made the bottom of Claude Poirier #69 for 2nd place. The 92 Martin Pelletier exceeds Murray turn 15 by outside. The Tower 23, Pelletier exceeds inside Nadeau. In the next round, a contact between the two pretended Pelletier #92 and Nadeau #9 last. Upon resumption, Martin Hébert #43 up and Félix Murray #95 down fighting head with their kits 8 of Alexandre Salvas and the 33 Alex Lajoie. In the round 25, Salvas fits inside between first Murray and Hébert 2nd. Salvas hit the wall between the curves 3 and 4 on lap 28, and let his 3rd place at Lajoie. Murray remains first in front of Hebert. To recovery 2 rounds before the end, Alex Lajoie #33 swerves off the coast. The 3 m of Michael Richard thus captures a place on the podium. Eric Lefebvre #88, off 5th departs, but returned 3 laps from the end. In the last round, Lefebvre, at the bottom, going on 4th at the expense of Lajoie.