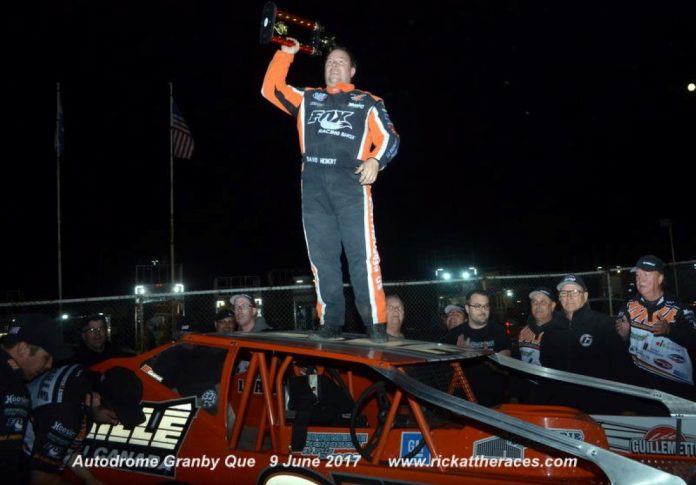 Richard Bertrand #08 led the first 13 laps. The 33 Bruno Cyr exceeds then by the bottom of the track. The 33 will keep the pole until the completion of the test. In the 14th round, Guy come #15 will be the same time 08 in the protruding from the inside for the second place. By outside François Adam #01 exceeds in turn Bertrand for the place #3 in the round of 16. In this same round, Steve Chaput #38 through the wide 17 of Jocelyn Chicoine to enter the top 5. In round 20, Adam loses his 3rd for the benefit of the pilot from 08. Adam him take it back outside two laps later. This momentum Adam also exceeds Guy come offshore for the #2 place. Chaput then passes the 4th place in 3rd place by Ti-red outside on the last lap. Guy come #15 remains in 4th place in front of Richard Bertrand.

Dany earned 90 part and the rest until the halfway point where the 92 Martin Pelletier trying to rip. It was only two laps from the end the 92 and 90 to determine their final fate by a crossover. It’s Pelletier that comes out winner. The 33 Alex Lajoie starts 6th. He joined the top 5 in the 8th round. Two laps later, Lajoie becomes 4th exceeding Kevin Berthiaume #1 K. Turn 12, 33 more than inside Steve Nadeau for 3rd place. In the 16th round, the 92 will pass near the wall and let his place Alex Lajoie 33 and 3 m of Michael Richard. However the tour following the 92 returns 2nd with after Lajoie. Frédéric Gamache #74 share 11th. Gamache reached the top 5 in the 19th round inside the 3 m. Martin Hébert #43 4th round 17 to 25 tour will return to the wells leaving his position at Gamache and 5th Richard.

David Hébert #ONE becomes first in the 12th round by the inside of the 73 of Alain Boisvert. The 1 M Mathieu Desjardins is the same in the 17th round for the 2nd place. Despite the efforts of Desjardins, it will be until the end. The 25 p of Michael Parent inside of the 79 of Maxime Plante in the 22nd round for the 4th place. 4 laps later, Parent made similarly to the 73 Boisvert father for the 3rd it will not leave. Mathieu Boisvert #73jr joined his father in 4th position in the round 31. The son surpasses the master to turn down 35. Steve Bernard #54 manages to break up the family in the last round by placing 5th.

Paulie Colagiovanni # 10 short c to our track for 2015. Before tonight, his best result was 7th on our track. That he had a perfect evening, starting first and winning his first victory at the age of 16 years in the Empire Sprint series. The leader in the standings, Jason Barney #87 starts 9th and manages 2nd in the 5th round. He remained there until the end Steve Poirier #28FM share 11th. When Dale Gosselin #3 leaves in the 4th round, he became 5th. The revival of the round 12, Poirier exceeds Alain Bergeron #88 for the 3rd position. In the round 13, Matt Tanner made inside of the 88 in turn for 4th place. Paul Kinney #19K manages to also exceed Bergeron from the bottom than in round 23 to close the top 5. Finally, note the delivery of Jordan Poirier #20FM 8th party who remained at the top 5 of the tour 15 to 21. He finished 7th, his best result in Granby is in his 2nd year of racing only with the ESS.