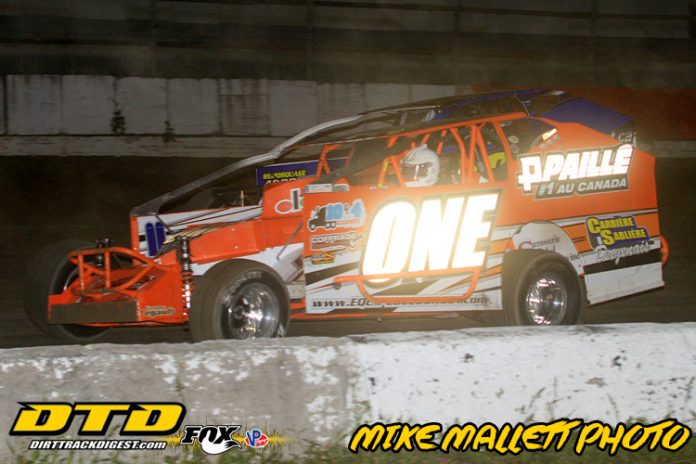 (TRANSLATED) GRANBY, QUE – Autodrome Granby, spectators were held in suspense in each final which it was impossible to predict the outcome.

The only element that foreshadowed that the Championship could belong to Stéphane Lemire was the lot of victories (4 in 7 races) since the final started badly. Left 6th place, it should start when a car in distress blocking the road. Lemire resumes so the tail in the 5th round recorded. It’s Steve Chaput #28, first since the 3rd round leading the Pack. It will not leave the pole. Dany Voghel #29 will be the leader of the first 2 rounds. He will fight for the second for 27 laps with Stéphane Larivière #11. Then François Adam #01 involved in making the inside of the 11th to the 30th tour for the 3rd place behind Voghel. 115 Stéphane Lemire becomes 5th lap 36 practicing outside of the 33 of Bruno Cyr. The next round, Lemire done the same Larivière. To relaunching two laps from the end, 115 embarks on a bold 3 wide outside the 15 Guy come in the middle with 11 inside. Lemire becomes 3rd. In the last round, Lemire is second and coming 4th. The son of the latter, Jonathan come #19 back with the Rookie of the yearhonors, being the only one in contention for this title.

Pelletier won duel ended tied in points, but with victories over to won what made him win the Championship after winning one of the RPM by one point ahead of Pelletier. The 3 m of Michael Richard is the leader of the original 5 towers in front of Dany Gagné #90. Then to the next revival, 90 more than Richard inside for the pole he never let. The next, turn in the 6th round, the 43 Martin Hébert done the same to the 3 m for the 2nd place. The 92 Martin Pelletier becomes 4th. At turn 10, Pelletier passes 3rd behind Hébert by 3 m inside. It will be repeated there and 92 and 3 m will exceed the 43. The 95 Félix Murray will be outside of the 43 of Hébert in the 13th round to 4th place. 54 Even 15th party root reaches 6th place in the revival of the 25th round. Turn 26, #54 rookie will make the bottom of Murray, but Murray will take the 4th place. On the last lap, Martin Hébert reclaims its 5th position. Root starts with a 6th place, his best result at the Autodrome Granby and the title of rookie of the year.

Alain Boisvert #73 hand first clings to this position until the completion of the test. The 54 Steve Bernard follows him to restart the round 22. Then, the son of Alain, Mathieu, in the 73JR comes 2nd. In its wake, we see the fin of ONE of David Hébert 10th party that during this same recovery exceeded the 54 now 4th. Michael Parent # 25 p between the top 5 in the revival of the round 31 by François Bernier #49 outside. To restart the 32nd round, we have father, Bernard Boisvert, Boisvert son and Parent. In the 33rd round, Parent practice offshore of the of the 73JR for the 3rd position. To restart the race on the 35th lap, 25 p moves up 2nd to Bernard. The ONE then also exceeds the 54. In the 40th round, after a 3 wide between the ONE the 25 p and 54, Hébert’s 2nd and 3rd Parent. Bernard and Mathieu Boisvert sealing their fate. Matthieu Laramée #91 who has been losing rookie for the benefit of Josianne plant #97 to the RPM was able to hang on to Granby ending at two positions in front of her.

Gabriel Marquis #22 hand on head position. On the 4th tower which is resumed, the 20 Pierre-Olivier Breault through outside Marquis. It is only 2 laps from the end that Marquis made the bottom of Breault to leave with the victory. Claude Cournoyer #47 left 12th reached position 6 in the 6th round. Between curves 1 and 2, it exceeds the two 45 Dominik Blais and Bruno Lafontaine to become 4th. Cournoyer then follows the 42 of Joseph Zengarli. To restart the round 12, Claude #47 made Zengarli by outside for the 3rd place. Luc Biron #71 gone 11th manages 5th turn 16 by bypassing the large 49 of Alexis Charbonneau. Two laps from the end, Biron is now inside of the 42 for his 4th final position. Claude Cournoyer #47 after getting rookie to the MPR last week leaves now with that of Granby.

3 Claude Cournoyer #47 Rookie of the year Granby and RPM