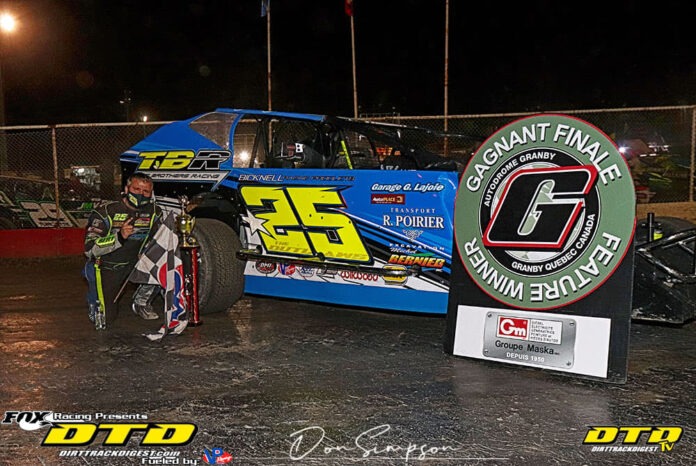 It was finally the first racing program of the 2021 season at the Autodrome Granby for the first half of its Super Weekend on Friday night. Under strict guidelines from the Quebec Public Health department, Granby was able to hold a show in front of 750 spectators, the maximum permitted. It was the first open air sporting event in front of a crowd presented in Quebec since the beginning of 2021. Race teams and fans were wearing a mask at all time so we could go racing.

Yan Bilodeau took off from the first position followed by David Hébert and Paul St-Sauveur for the 358-Modifieds 40 lap opener. During the first lap, a pile-up occurred in front of the main grandstands involving several cars including those of Sébastien Gougeon, François Bernier, Dany Gagné, Josianne Plante, Jeffrey Lapalme, François Bellemare and Chantal Provencher. The cars of Bellemare, Gagné and Lapalme were unable to continue after suffering major damage. On the restart, David Hébert took the lead of the race ahead of St-Sauveur and Bilodeau. On lap 13, François Bernier lost control of his 49 machine after getting back in the top-10 from the opening lap pile-up.

Coming towards the middle part of the race, Hébert was very dominant and had a long lead over Paul St-Sauveur and Steve Bernier. Another yellow flag occured on the 23rd lap when Maxime Plante and Yan Bussière had to enter the pits. The wouldn’t come back on the track after mechanical failures. On the restart, we witnessed a good fight between Steve Bernier and David Hébert for the first position. Bernier finally had the advantage and led until the checkered flag, followed by David Hébert and Mario Clair.

In the Sportsman 40-Lap event, William Racine started from the first position followed by Jonathan Nadeau and Marco Gilbert. In the opening laps, Racine had the better car with a tremendous battle behind involving Nadeau, Alexandre Salvas, Félix Murray and Gilbert. However, the 95 Murray blew a right rear tire on the 8th lap which forced him to enter the pits. After 10 laps, Samuel Charland, at the wheel of his new car, came alongside Racine and they had a good fight for a few laps. Ultimately, it’s Charland who had the advantage. He led the race for several laps until he was surprised by Cédric Gauvreau’s car as they were tangled up with the lap cars. The 2 drivers offered quite a spectacle during this fight. Gauvreau, from Gatineau Que.,  dominated the rest of the race followed by Samuel Charland and William Racine at the checkers.

In the 30 laps Pro Stocks event,  Bruno Richard started from the first position followed by Jeffrey Lapalme and Stéphane Lebrun. In the first laps, a good fight ensued between Richard and Lapalme and it was Richard who quickly took the lead. During the 16th lap, a problem arises for Jeffrey Lapalme which leads to a yellow flag. Bruno Richard dominated the event while behind him Pascal Payeur climbed several positions after starting from the 10th position. Richard would never be worried and got his first win of the season in the Pro Stocks division in front of Pascal Payeur and the defending champion, Yves Hamel.

Autodrome Granby helds another event on Saturday night with a 75-lap Modified event. Sportsmans, Pro Stocks and Mini Stocks will be the support division. All 750 tickets have already found some takers.