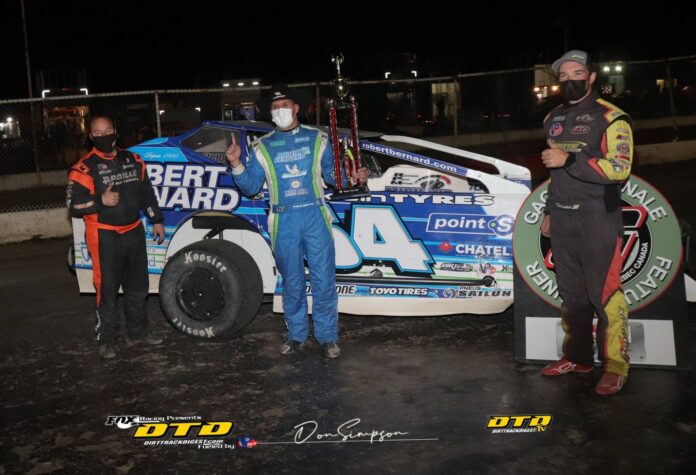 GRANBY, PQ – It was the second evening of Super Weekend at Autodrome Granby. Once again, the 750 spectators were treated to a whole evening of racing. Like Friday, the fans, teams and drivers have been exemplary in respecting health measures.

The Modifieds had a final of 75 laps on the schedule and we were treated to a spectacular race. Steve Bernier started first for this final and he kept this position until the 20th lap, while his brother François, who started fifth, surprised him and a great fight ensued between Steve and Steve Bernard.

Bernard took second place on lap 39 and two laps later took the measure of François Bernier. Alan Therrien had a great evening and came to third place, taking a look at Bernier in the turn.

Having started from behind after some trouble, David Hébert moved up the peloton and passed François Bernier and Alan Therrien in turn to get behind Bernard. The two pilots were extremely fast, but Hébert managed to get closer when Bernard was stuck behind traffic. Bernard managed to pass the slower car but Hébert did not.

A yellow flag tightened the field for an important relaunch.  Bernard chose the inside which was very fast and kept his first position while Hébert remained second ahead of Therrien.

Despite a last attempt on Hébert’s last lap, Cowboy Bernard got the victory.

The ONE of Hebert finished second.  Alan Therrien saw his efforts rewarded with a nice third place. Michael Parent finished fourth while Alex Therrien comes to recover from his Friday evening by finishing fifth.


Sportsman
In the Sportsman 30-lap feature, Felix Roy would take the lead right from the get go and hold on for the relatively easy win. He led all the laps until the checkered flag for his first win of the season. Alexandre Salvas tried everything in the last part of the race and it paid off as he managed to finish 2nd. Moïse Pagé was able to get by Cedric Gauvreau in the last few laps to get the third place at the finish. Several teams will have to work hard this week since several cars were badly damaged, including former Granby champion Alex Lajoie who really got messed up on the front stretch.

Pro Stocks
In the Pro-Stock 30-lap feature, Yves Hamel and Gabriel Caouette had a tremendous battle all race long as they fought lap after lap for the lead throughout the whole event. It was veteran Hamel who finally had the best of him at the finish. Another veteran, Bruno Cyr, was able to get the third place at the checkers. Two serious accidents happened during the feature destroying the cars of Pascal Payeur and Bruno Richard, the winner of Friday night’s event.